On Jan. 20, Former Alaska governor Sarah Palin told a crowd of 8,000 people that her son Track’s arrest for... 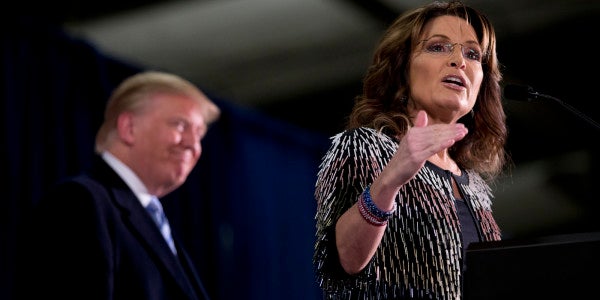 On Jan. 20, Former Alaska governor Sarah Palin told a crowd of 8,000 people that her son Track’s arrest for domestic violence was the result of combat-related post-traumatic stress.

“When my own son is going through what he goes through coming back, I can certainly relate to the families who…feel these ramifications of PTSD,” Palin said at a rally in Tulsa, Oklahoma, after endorsing Donald Trump as the Republican candidate for president. “And it makes me realize more than ever it is now or never for the sake of America’s finest that we have a commander-in-chief who will respect them.”

Track Palin, a 26-year-old Iraq War veteran, was arrested Monday night after his girlfriend called the police saying he had punched her in the face and that he was carrying around an AR-15 rifle. She was afraid he was going to harm himself, Track’s girlfriend told police.

Related: We need to stop putting PTSD on a pedestal.

In response to Palin’s comment, many veterans have spoken out, saying that PTSD is not an excuse for her son’s behavior. On Thursday evening, Army veteran Nathan Bethea took to Twitter to express his frustration. Bethea served as an infantry officer from 2007 to 2014 and was part of operations to recover Bowe Bergdahl in Afghanistan in 2009. He is a co-host of Task & Purpose Radio and also an instructor with Voices From War, a New York-based nonprofit helping veterans write about their experiences.

We captured excerpts from Bethea’s series of tweets below.