You walk around enough as a veteran, and sooner or later, someone will ask you, “You military? What branch were... 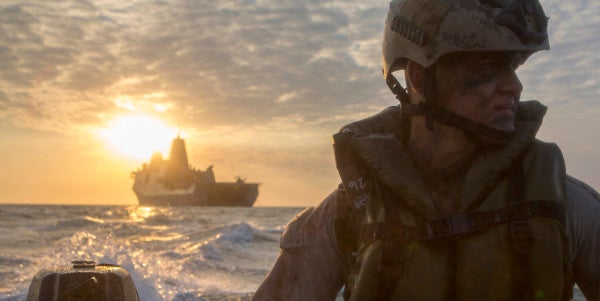 You walk around enough as a veteran, and sooner or later, someone will ask you, “You military? What branch were you in?”

Even though the Marine Corps continually pissed me off and was the target of my endless rants for years, I’m always proud to say, “Marine Corps.”

Once I tell someone I was in the Marines, I subconsciously try to stand up straight and act better, because heaven forbid I disgrace the Corps and my fellow Marines, no matter how much I complained about it and it’s sometimes silly customs, courtesies, and regulations. Only Marines are allowed to think negative thoughts about the Corps, after all.

When they ask how long I was in and I get to reply “20 years,” I still enjoy their startled responses and spoken or unspoken admiration, even though I still tell anyone who asks that they should probably get out after one tour.

The military, and maybe the Corps in particular, is like a tattoo on one’s soul. That tattoo isn’t applied in boot camp or even one’s job-specific school. It’s applied gradually, little by little, on every missed holiday, every “oh shit” moment, every moment of tomfoolery on deployment, and every time one finds out another comrade paid the ultimate price. The tattoo was applied both when our crew partied like rock stars on cross-country flights and when we landed in Afghan landing zones.

Related: 6 lessons being a military pilot taught me for life

The tattoo is subtle, but always visible to those who know where to look. The no-load punks who completed boot camp, but never finished a tour in the operational forces due to some obscure medical or administrative reason, don’t get it, or maybe just the outline from a fading stencil.

Here are some things that people who’ve been in awhile do that no one else cares about or notices. You see them and you know who you’re dealing with.

1. Posture. It’s not as if veterans are always stiffer or even stand up straighter than normal people, but they comport themselves differently. A veteran who is 5-feet 9-inches stands like someone who is 6 feet tall, and the odd part is that it’s not physical, but just in the way they carry themselves.

2. Sir and ma’am. Few children, and even fewer adults, trouble themselves with saying “sir” and “ma’am” to people in everyday life. If someone younger than 40 says “sir” to a stranger, it’s almost guaranteed he’s a vet. Of course, everyone in the military knows to call their superiors, by rank or age, by title. Almost as important, vets know that saying “sir” doesn’t mean one is necessarily subjugating oneself. They know that “sir” can mean “I respect you” or “screw you.” It’s all in how you say it.

3. Timeliness. With civilians, a couple minutes more or less never makes much of a difference. I told someone he was late to work once. When he protested, I told him that my watch, set with a time synced with the atomic clock at the damn United States Naval Observatory said differently. I’m pretty sure that guy is still “no impact, no idea” on that whole concept.

4. Belts. Before I joined the Marines, I really never noticed belts. If I dressed up, I wore them, but I never thought about them. Now I instinctively wear a belt, and now somehow know that men traditionally thread their belts counterclockwise and women clockwise, due to bizarre old customs.

5. Shower shoes. Or “flip-flops” to you non-military types. No one who’s been in the military will ever go into a public shower without them. Put more simply, veterans know how depraved people are and expect the worst. Athlete’s foot is bad, but the dreaded white jellyfish is even worse. And don’t even get me started on appearances of the rare, but terrifying Brown Trout.

6. Undershirts. I never wore an undershirt before I joined the Corps. Now I live by them and most long-serving vets do, too. One of the positive effects of military service. No one wants to see your sweaty pits.

7. Profanity. This crosses slightly into cliche, but those in the military often swear in public, in private, and pretty much everywhere. That’s not really noteworthy in today’s day and age. Someone dropping the F-bomb is hardly unusual, but vets are more prone to create poetry of the profane.

8. Not being shocked. Vets have been around the block. That obviously comes in degrees, but when watching a movie or anything with graphic gore with vets, be prepared to hear them laugh, instead of the expected reaction of recoiling in horror. Part of this is numbness at having seen it all. Part of it is a macho facade that nothing can possibly be shocking to them. Either way, vets won’t tap out, whether at a horror movie or at what a typical civilian would consider a horribly profane joke.

9. Not walking on the grass. This may be a Marine-specific one. Marines will avoid walking on grass like it’s kryptonite. The roots of this lie in history and tradition, though I’ll never forget the story I heard from a WWII Marine who said that the penalty for walking on grass at Camp Lejeune used to be confinement with only bread and water for sustenance. If you want to keep Marines out of someplace, don’t bother with fences. Just plant a verdant field of St. Augustine around it and Marines will avoid it like hot lava.

You can run, but you can’t hide, veterans. Your profile is out there. We will always wear an invisible red, white, and blue tattoo etched by our blood, sweat, and tears.