The Marine Corps may need to retake the punctuation MCI. 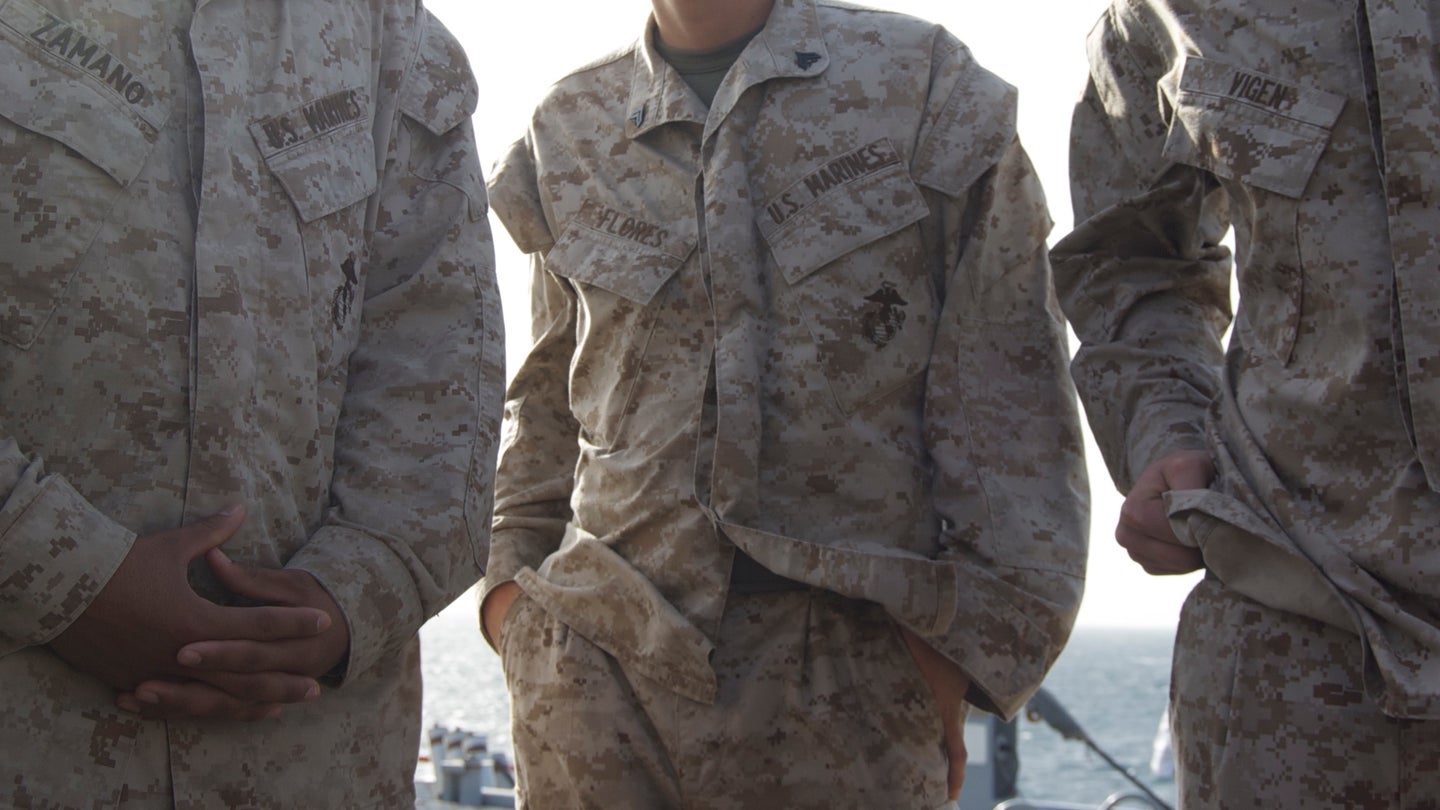 Anyone who has ever served a day in the Marine Corps knows one of the storied institution’s most sacred rules: Don’t put your hands in your damn pockets.

If as a Marine, you place your hands in your pockets in garrison while in uniform, be prepared to hear a crusty staff noncommissioned officer yell something that includes the words, “Hey Devil Dog,” and the rhetorical question, “What are we back on the block?”

The thought process being that Marines must always present themselves as professionals, and having your hands in your pockets somehow detracts from professionalism. So the Marine Corps made it a rule, and that rule is enforced at Marine Corps bases from Okinawa, Japan, to Camp Lejeune, North Carolina.

Task & Purpose reached out to Headquarters Marine Corps in Quantico, Virginia, in an effort to learn the specific source of this policy. The Marine Corps pointed us to Marine Corps Order P1020.34G, the order on Marine Corps uniform regulations, which contains a specific change that reads:

“The use of chewing gum, chewing tobacco, cigarettes; hands in pockets; or the consumption of food or beverage while walking in uniform or while in formation, are examples of activities that detract from an appropriate military presence. However, good judgment will govern the application of this policy in the field environment.”

At first read, this means that you can’t have your hands in your pockets while walking in uniform or while in formation. The Marine Corps, however, interprets it differently.

“If you notice, the words ‘; hands in pocket;’ are bracketed by semicolons, which make it a stand-alone statement, separate from the full sentence and the text ‘while walking,’” Capt. Dominic Pitrone, a Marine spokesman, told Task & Purpose via email, citing comments from the Marine Corps Uniform Board. “The grammatical (and official) interpretation of this is that you are being told that you cannot keep your hands in your pocket, period.”

This claim, that there’s a stand-alone sentence with independent context and ramifications inserted in the middle of a sentence, defies the rules and logic of both syntax and grammar.

Semicolons are chiefly used in two ways: as part of a complex series, or to offset an independent clause. A complex series is a list of things where the items in the list contains commas.

Example: “Lance Cpl. Steve Schmuckatelli was stationed in Camp Lejeune, North Carolina; Parris Island, South Carolina; and Twentynine Palms, California.” Without the semicolons, “Camp Lejeune” and “North Carolina” would seem like different places, instead of aspects of the same place, and the sentence would be a total mess.

So the words “hands in pockets,” is not a “stand-alone statement” that is somehow immune from the other factors in that sentence, as the Corps says is the grammatical and official interpretation of the Marine Corps. That doesn’t make any sense. How could a different, broader rule exist in the middle of a sentence about something else, and be encapsulated by the mere words, “hands in pockets?” More likely, someone thought they needed a complex series and messed it up.

In any case, the Marine Corps may want to copy edit its uniform regulations, or at least retake the punctuation MCI.