Remember when I wrote that Trump was looking at ways to undercut NATO, such as a U.S. troop pullout from... 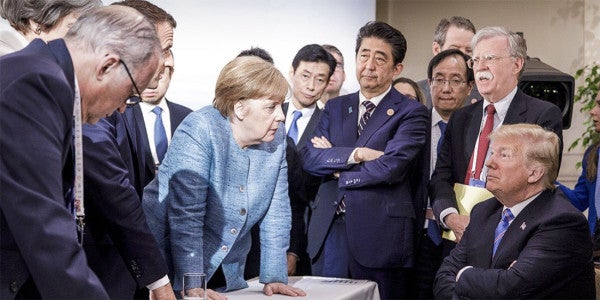 Remember when I wrote that Trump was looking at ways to undercut NATO, such as a U.S. troop pullout from Germany? Sure you do, it was last Friday.

Comes now a squad of six reporters from the Washington Post with some of the grim details: “The Pentagon is analyzing the cost and impact of a large-scale withdrawal or transfer of American troops stationed in Germany, amid growing tensions between President Trump and German Chancellor Angela Merkel, according to people familiar with the work.”

Also, on Friday, Trump put Crimea explicitly on the table, telling reporters that, “We’re going to have to see” if he will accept Putin’s claim.

To top things off, the U.S. ambassador to Estonia, a career professional, resigned because he could no longer abide Trump’s attacks on NATO.

I know some of you think I am over-reacting. But I feel like we are in a real decline-of-the-West mode, like some weird version of the 1930s in which Joseph Kennedy became president.

I sure would like to know what Trump said in the letters I am told he has dispatched to NATO allies, putting them on notice. Did anyone get a copy to share?