I never pictured myself having kids. It just didn’t seem like something I’d be good at, or a lifestyle I... 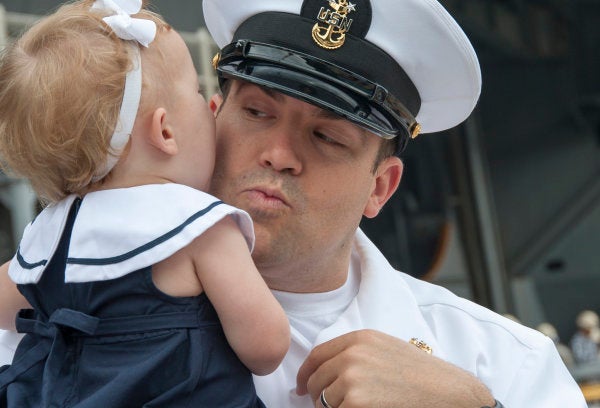 I never pictured myself having kids. It just didn’t seem like something I’d be good at, or a lifestyle I wanted, until it happened. The moment I found out I was going to be a dad was by far one of many mixed feelings. I was excited and happy; afterall, I was, and still am, with an amazing woman who, I love to be around, and actually saw myself shaping a future with.

There was also some concern: The world is spiraling down the toilet between politics, war, foreign policy, racial issues and the electronic culture influencing kids today. There was even this gleaming hint of fear. “Holy shit, I have to keep a tiny, helpless human alive; and for the first 18 years, all their failures and shortcomings reflect on me as her role model.”

As it were, on a sunny but brisk April afternoon, my daughter entered into the world and shit got very real, very quick. New babies eat roughly every two hours, and fill diapers with poop explosions almost as frequently. They spend a ton of time napping at first, but still wake up screaming and hungry every couple hours, and if you didn’t know, the sound of babies crying actually release hormones that induce a high-stress response from humans. It’s science, and it’s the reason people shout, “Would you shut that damn kid up?!”

With all the new changes that my needy little minion demanded, I learned pretty quickly that having served actually gave me more preparation for coexisting with a new child than I originally anticipated. Here are five things I learned quick about being a new parent.

An important lesson in traveling, deploying, camping, and survival kits: Only pack the things you’ll absolutely need. I can assure you that most around-town excursions do not require a massive diaper bag loaded with a hundred diapers and a one week food supply.

In the end, I get by day to day with a $7 no name brand fanny pack that I zip-tied the waist straps down to their smallest setting. This way I can clip it to her infant car seat, or the stroller, and not have this massive and pointless extra weight to carry around. Inside is simple: three diapers, two disposable changing pads, a slim package of wipes, one burp rag, and an optional pacifier. I can fit a bottle in there as well and I know that I can run errands for three to five hours without needing anything else. On a nerdy side note, I gave it a name, the Daddy Rapid Diaper Deployment kit, or DRDD for short.

Babies don’t give a shit what you plan to get done today; you either learn to put those things off until your spouse gets home and sacrifice that time to get other things done, or learn to work on projects in very short intervals while your child naps. Keep in mind, it’s tough being tiny; there’s not many things they can do for themselves, and they don’t exactly tell you what they need or want at any given moment. The Marines have a saying for how to live life as a parent from the get go, “Semper Gumby.”

Get used to having to change your plan, a lot. In fact, don’t even make a plan, just let things happen when they can. As soon as you think you have your kid completely figured out, they’ll have a developmental leap in their brain and you have to step back, regroup, and just go with the flow.

3. Start with the simplest solution.

While not all babies are the same, in most instances, getting a child to stop crying is a task easily resolved by starting with the simplest solution. I can narrow it down to four very easy things to start with: hunger, dirty diaper, uncomfortable position, and completely idiopathic. If the first three things don’t solve the problem, often times it’s number four, and all you can do is let them scream it out on their own. Seriously, don’t touch them, just walk away, close the door, step outside for a few, and check back in 10-minute intervals. I know this sounds crazy and cruel, but I promise your child will still be alive when you come back inside.

On the same topic, my daughter has spent the majority of her life wearing nothing more than a diaper. I’m certainly not going to dig out her most complicated outfit either. Don’t bother buying a ton of clothes, in fact, your friends and family will probably bombard you with that stuff anyway, but if you’re doing things alone, keep it simple. Onesies, stretchy pants, and socks will get you through 99.9% of anything that occurs outside your home. I left out shoes on purpose. They don’t stay on, and babies naturally don’t like their feet being agitated anyway; socks are already pushing it.

Sleep deprivation is a skill we’ve all had to hone and acquire on various levels, whether you rang the bell on day three of hell week at BUD/S, or operations were just so intense sleeping wasn’t an option. Getting up every couple hours sucks, but once you get the rhythm down, you’ll be able to change a diaper, get that bottle chugged and slap a burp out of your kid pretty quick and be back in bed in about 15 minutes. In my specific case, however, in an effort to save on childcare costs I offered to work night shifts, and spend the days with my kiddo. This wasn’t so bad the first few months, but now that my kid is 8 months old, she’s mobile and doesn’t nap as much, so sleep has become a rare commodity in my life.

5. Suck it up, in the end all this suffering pays off.

There are going to be rough days; you’re going to be exhausted, and your child is going to scream like someone is sawing her leg off for what feels like an eternity. You’re going to feel stressed out, because science, and ultimately you just became a personal slave to this tiny thing. Embrace the suck, because just like the things that suck in the military, it’s not going away. Between the screaming and repulsive diapers, sleep deprivation and dashing across the room to keep your kid from trying to injure themselves, there are going to be moments that make all of it worth it in the end. When your kid falls asleep on your chest, and she’s the most peaceful and content person on the planet, everything that sucked about the last hour/day/week dissipates and it’s somehow strangely worth it.