After Army Staff Sgt. Matthew Whalen suffered a brain hemorrhage from which he would not recover, his life of sacrifice... 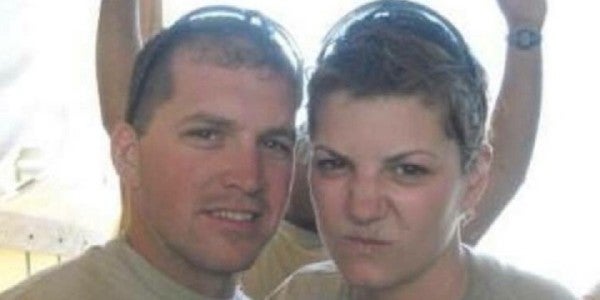 After Army Staff Sgt. Matthew Whalen suffered a brain hemorrhage from which he would not recover, his life of sacrifice and service continued after death.

On Dec. 20, Whalen suffered a sporadic subarachnoid brain bleed and the following day his family made the decision to take him off life support so his organs could be donated to two save the lives of two other veterans, reports Fox News.

An honor guard of more than 100 current and former service members who served alongside Whalen during his deployments to Iraq and Afghanistan gathered to say their goodbyes at Plaza Medical Center in Fort Worth, Texas.

“That’s what Matt deserved,” said his wife, Hannah, of the ceremony. “He was a four-time combat veteran. He was an exceptionally loving dad. … That ceremony that they did, he deserved that recognition.”

Hannah was Whalen’s medic during his second tour in Afghanistan, and they married in February 2012, according to Today.com.

Sean Hatton, a close friend of Whalen’s, uploaded a video of the somber salute to Facebook, at the request of Whalen’s wife. Since the video was posted on Dec. 21, it has reached more than 10 million views and has been shared more than 236,000 times.

We say farewell to Staff Sergeant Matthew James Whalen. In his final act on this Earth, it's only fitting that he gave his life and in return saved two others. And it's almost as if it were meant to be that the two donor recipients happened to be veterans. There is no SOP or protocol for this type of ceremony, but with the help of Matt's wife Hannah, all of his family, the nursing staff, and an Honor Guard we were able to show our love and appreciation in the best way we could. All of you out there scattered throughout our country this close to Christmas can rest assured tonight. Your prayers and kind words these last couple days have carried the Whalen family and the support was truly felt.Hannah wanted this to be posted to Facebook for everyone to see and be part of.Thank you all once again. Funeral arrangements will be pushed out by Hannah at a more appropriate time. Harlow Danger, Matt Whalen, Rafael Machuca, Matt N Stacey Lussi, Felix Garcia, Andrew Lee, Terry Goble, Krystle N Justin Barnes.

“In his final act on this Earth, it's only fitting that he gave his life and in return saved two others,” Hatton wrote on the Facebook post. “And it's almost as if it were meant to be that the two donor recipients happened to be veterans.”

Whalen was 35 and is survived by his wife Hannah, and their three children. Both Hannah and Whalen served with 2nd Brigade Combat Team, 101st Airborne Division.

A GoFundMe page was set up by Brandon Bledsoe to help Whalen’s wife and children deal with expenses, surpassed its goal of $50,000 in six days, reaching nearly $73,000.