Depending on what you’re shooting, there’s always a little bit of recoil, sometimes it’s hardly noticeable, like the AR-15 —... 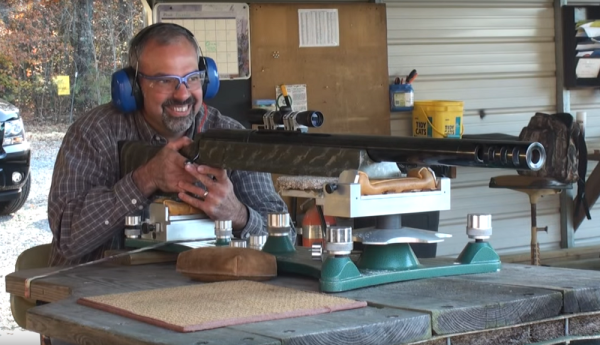 Depending on what you’re shooting, there’s always a little bit of recoil, sometimes it’s hardly noticeable, like the AR-15 — unless you’re a journalist with the New York Daily News. On the other hand, a rifle like .950 JDJ, has a kick that leaves a lasting impression and probably a bruise the size of a dinner plate.

The largest caliber rifle ever built, this rifle — no, let’s be honest, it’s a cannon — fires a .950-caliber round that is nearly an inch wide and four inches long. The rifle was tested out by the guys at Knight Rifles, who had the foresight to film it for posterity. The recoil is so intense that one of the shooters in the video likens it to firing 10 .30-06 rounds at one time.

Based on the reactions in the video, it’s more like trying to ride a mule while firing 10 .30-06s. Every time the gun goes off, it practically leaps off the table as the shooter struggles to hold on.

The .950 JDJ is one of three such guns made by SSK industries, and the one in the video is the lightest, weighing in at 50 pounds. The custom-made bullets are propelled by 240 grains of powder and cost about $40 a piece.

When fired, the round has a kinetic force comparable to a World War I-era tank or 20mm cannon round, according to International Science Times. Seriously, this thing is so powerful that it was almost classified as a “destructive device,” but a special “sportsman exception” was made for the rifle.

Watch the full video and see for yourself.