“The use of these drones might work well on Russians state television, but in terms of their practical impact on the ground, I don’t see it having a material effect." 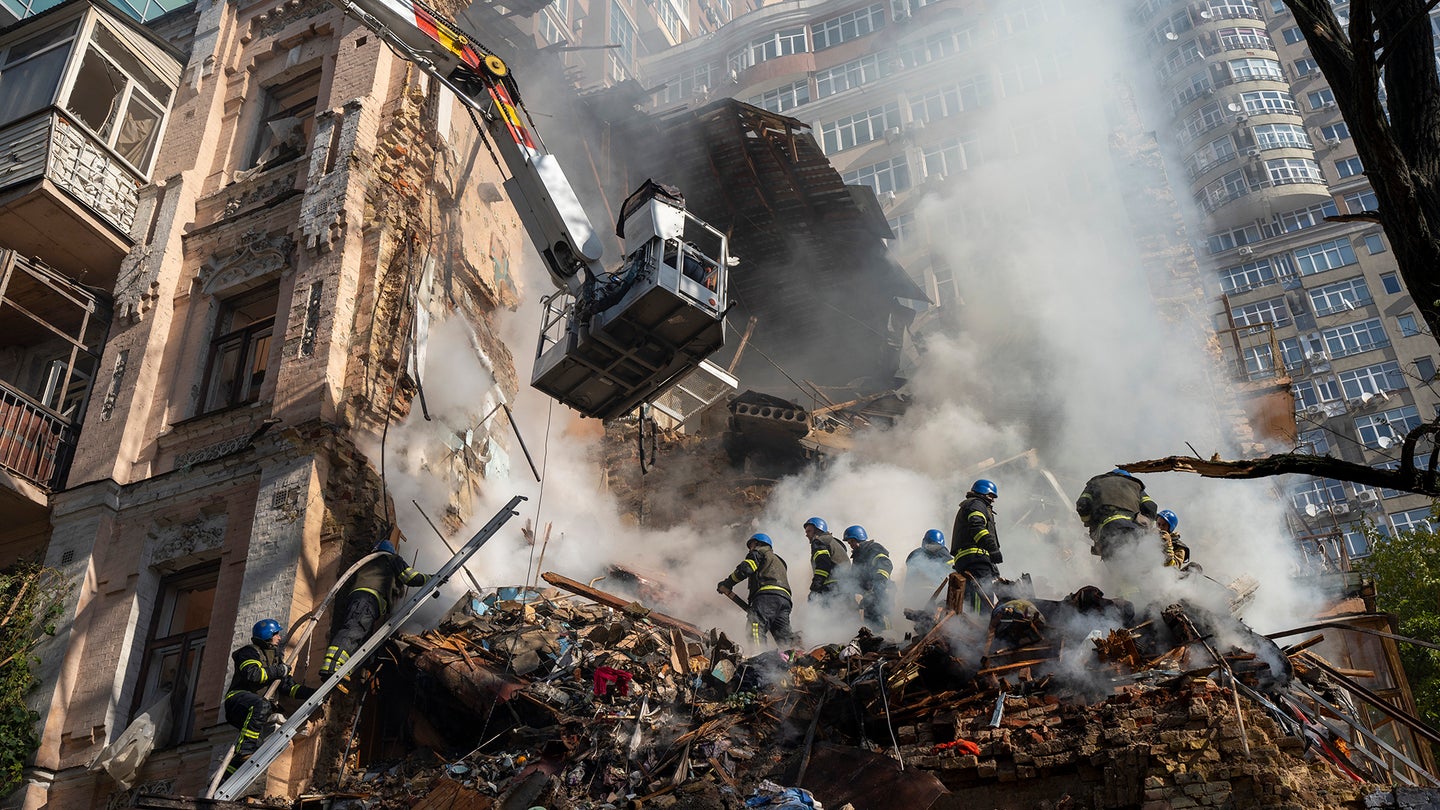 Russia has launched Iranian-made drones against Kyiv in the first known mass deployment of loitering munitions against Ukrainian civilians.

The Russian military unleashed Shahed-136 ‘kamikaze’ drones against civilian targets in Kyiv on Monday as part of its campaign to terrorize Ukraine’s population into submission. The drones can reportedly carry an 80-pound warhead up 1,500 miles and linger over a designated area before striking a target.

At least four people were killed in Kyiv after 28 such drones attacked Ukraine’s capital in several waves, Ukrainian officials told the Associated Press.  A spokesman for Ukraine’s air force claimed that 13 of the drones had been shot down by local defense forces but five had struck the city.

The civilian casualties were in an apartment building that was struck by one of the drones; other Shaheds targeted Kyiv’s heating network. Video posted on social media showed that the drone attacks on Kyiv continued into the night.

It appears that Russia’s strategy is to use these drones to destroy Ukraine’s ability to generate power to the point that “it makes the Ukrainian winter actually lead to people dying from cold weather,” said Benjamin Jensen, an expert on future war, gaming, and strategy at the Center for Strategic and International Studies.

“The idea is that it’s cheaper to destroy substations, power plants, pipelines than it is to repair them,” said Jensen. “That’s the kind of competition that is going on right now. What we don’t know is how deep Russia’s magazine is.”

Whether Russia’s plan will prove to be successful depends on several unknown factors, including how many Shahed drones Iran has provided Russia, how many of those loitering munitions fail to explode, and how many drones the Ukrainians are able to shoot down, Jensen told Task & Purpose.

Over the past several weeks, Russian troops on the front lines of the invasion of Ukraine have suffered severe reverses, inducing the force to now use cruise missiles, surface-to-air-missiles, and suicide drones to inflict so much pain on Ukraine’s civilian population to force the country’s leaders to sue for peace, Jensen said.

However, these drone attacks on civilians end up achieving the exact opposite result, he said.

“A; I don’t think Ukraine was in a position to want to negotiate before this,” Jensen said. “And B; We find all these anecdotal reports that as the Ukrainians head back down to bomb shelters, it’s creating the sense of group solidarity – a similar dynamic that happened in the bombing raids on London during World War II.”

Indeed, Peter W. Singer — a strategist with the New America think tank in Washington, D.C. — sees several parallels between the Shahed drone attacks on Kyiv and the German V-1 “flying bomb attacks” on London in 1944 and 1945.

“The drones don’t carry as many munitions as other means already used in the war, and so aren’t able to massively alter its overall flow,” said Singer, who is the co-author of LikeWar: The Weaponization of Social Media. “But like back then, this is more about a losing power trying to make up for its battlefield losses by sparking fear from a new kind of weapon targeting civilians.”

“It also gives a taste of what is to come as the technology gets more advanced and more widespread,” Singer continued.  “Just as missiles went from novel and not all that effective, to the norm of war, the same will happen with swarms of armed drones, aka loitering munitions.”

Going forward, the United States and its allies should expect to face a variety of different threats from ranging drones and loitering munitions that can fly for hundreds of kilometers to small quadcopters, said Sam Bendett, an adviser with CNA, a non-profit research and analysis organization in Arlington, Virginia.

Russia’s attacks on Kyiv using the Shahed drones are also reminiscent of how Iranian-backed Houthis in Yemen have used drones to travel long distances and attack oil fields and other targets in Saudi Arabia and the United Arab Emirates, Bendett told Task & Purpose.

Because the Russian military was unable to gain air superiority early in the war, is has turned to Shahed drones to demonstrate it can still launch attacks inside Ukrainian airspace, he said.

“This is meant to demonstrate to Ukrainians that they are not supposed to be safe anywhere, because Shaheds can fly for hundreds of kilometers and apparently can strike any part of Ukraine, including the capital, and the capital is supposed to be well defended from aerial threats,” Bendett said. “It also demonstrates that the Russians have a lot of these drones, and even if most of them are shot down, as happened today, it only takes a few of them to get past.”

“Depending on the target, the impact can be quite significant, psychologically – emotionally as well.”

U.S. officials have estimated that Iran transferred hundreds of Shahed drones to Russia, and Ukrainian President Volodymyr Zelensky recently said that Russia has ordered 2,400 more of these drones, Bendett said, adding that there is evidence that the Russians have started to manufacture the Shaheds themselves.

But every time the Russians use these kamikaze drones, the Ukrainians learn something new about how to shoot them down, said Luke Coffey, a senior fellow with the Hudson Institute think tank in Washington, D.C.

“When you add up these two things — the experience gained by each attack and then the fact that Ukraine’s air defense systems are increasing in number and capability — hopefully, the Ukrainians will be able to counter this new Iranian threat,” Coffey said.

Russia’s use of Shahed drones marks the first time since it launched its full-scale invasion of Ukraine in February that loitering munitions have been used against civilian targets, he said.

These attacks also come as Russian President Vladimir Putin tries to show Russians that he is acting tough in the aftermath of a successful Ukrainian attack earlier this month on the Kerch Strait Bridge, a strategically important link between occupied Crimea and Russia, Coffey said. The Russians have retaliated for the attack on the bridge attacking Ukrainian critical infrastructure.

“The use of these drones might work well on Russians state television, but in terms of their practical impact on the ground, I don’t see it having a material effect,” said Coffey, who noted that Russia has decided to use the Shahed kamikaze drones against civilian targets instead of supporting its retreating forces in southern and eastern Ukraine.

“You would have thought that Russia’s main effort, main line of defense, main focus would be these two regions; and if they had these additional capabilities available, they would use them on the front lines for tactical impact,” Coffey said. “Instead, they’ve chosen to use these few resources in civilian-populated areas, which probably means Putin is more worried about sending a message to his own people than he is about achieving any real battlefield effect on the ground.”