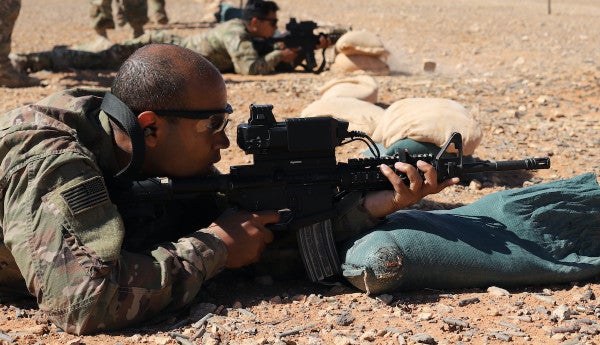 Photos published to the Defense Visual Information Distribution Service (DVIDS) on May 30, first reported by The War Zone, show several unidentified U.S. service members at the At Tanf garrison in Syria engaging targets with M4 carbines outfitted with a SMASH 2000 system.

The SMASH 2000, developed by Israeli defense contractor Smart Shooter in cooperation with Sig Sauer, uses a weapon-mounted optic and special pistol grip that “allows you to acquire, lock on and engage targets … [and] the weapon to fire only when it's a guaranteed hit,” company CEO Devin Schweiss previously told Military.com

In the photos, “coalition forces” are pictured “zero[ing] Smart Shooter sighting devices during a familiarization range,” according to a caption: “Coalition and partner forces regularly train on various weapon systems in a joint effort to help set conditions for the enduring defeat of Daesh in Syria.”

As The War Zone points out, the SOF personnel pictured in the DVIDS photos appear to be practicing on a target suspended from a small personal drone as part of training on tracking and engaging the unmanned aerial systems that have plagued U.S. forces in Syria in recent months.

Here's how the SMASH 2000 system works, as Schweiss previously described to Military.com:

According to Hawkins, the command purchased the SMASH 2000 systems from Smart Shooter in March 2019 to evaluate the capability in an operational environment.

SOCOM currently has 98 of the SMASH 2000 systems in its inventory, Hawkins said. The results of the evaluation, conducted by the command's Army and Navy service components and Special Operations Command Central (SOCCENT) personnel, are currently pending.

SOCOM isn't the only command interested in the Smart Shooter systems: According to Smart Shooter CEO Schweiss, the Army is currently evaluating the SMASH 2000 as part of its search for an advanced fire control system to go with the service's Next-Generation Squad Weapon.

The focus on countering unmanned aerial systems in Syria is of increasing importance to the U.S. military. Indeed, U.S. Central Command chief Marine Gen. Kenneth McKenzie affirmed during congressional testimony in March that personnel deployed to Syria had in recent months come under attack from drones laden with explosives that were “possibly” operated by ISIS fighters in the region.

According to Business Insider, counter-drone systems were also a major part of in CENTCOM's 2020 unfunded priorities list, which contains funding requests not included in the command's fiscal year budget request submitted to Congress.

“We're open to anything, and a lot of smart people are looking at this,” McKenzie said in March. “This is a significant threat.”