U.S. troops in Iraq have already come under attack by drones three times so far this year 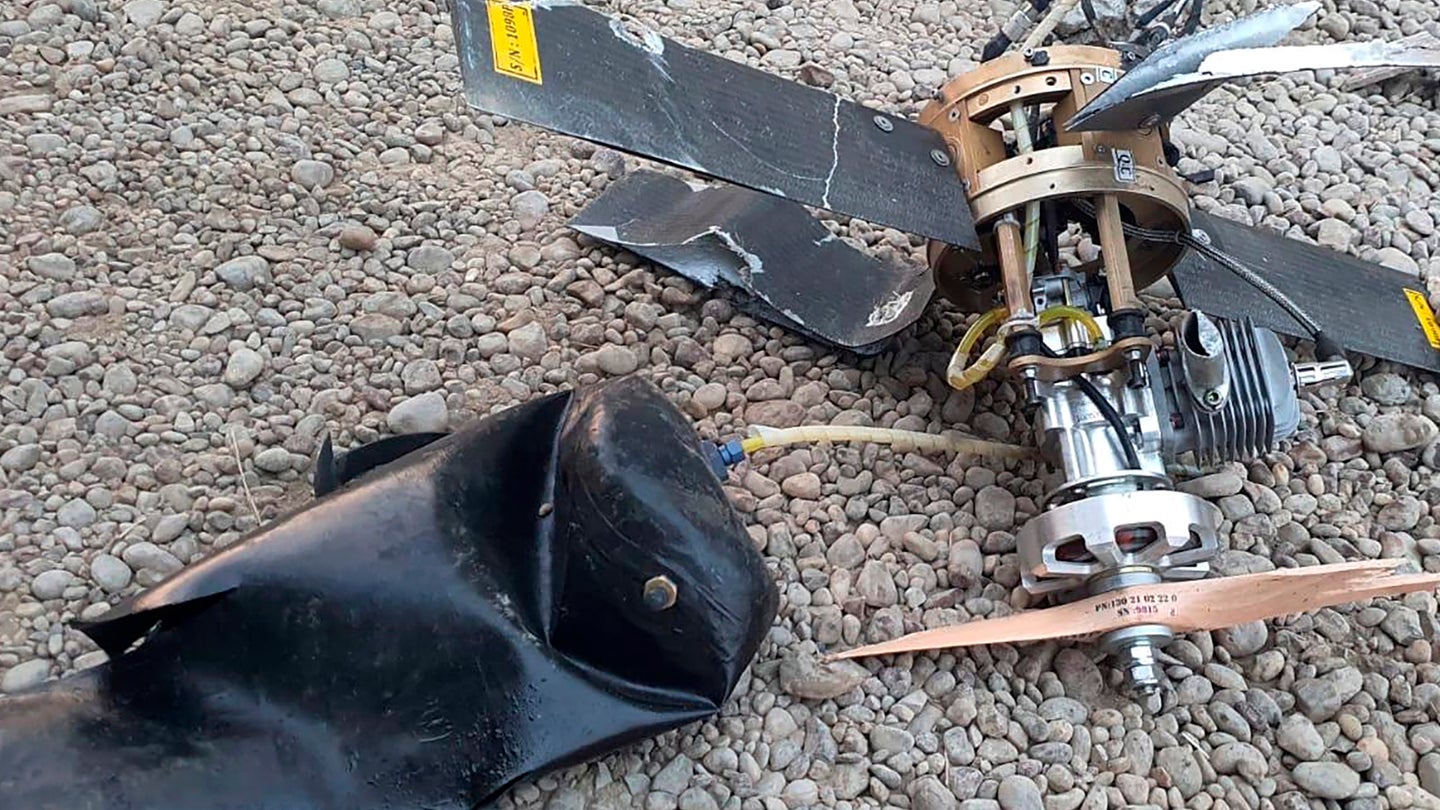 The wreckage of a drone is seen at Baghdad airport, Iraq, Monday, Jan. 3, 2022. Two armed drones were shot down at the Baghdad airport on Monday, a U.S.-led coalition official said, an attack that coincides with the anniversary of the 2020 U.S. killing of a top Iranian general. (International Coalition via AP).
SHARE

American troops in Iraq have already come under attack by drones three times so far this year. While all of these attacks have failed, these incidents show that drones pose an increasing threat to American service members and the danger shows no signs of abating any time soon.

On Jan. 6, a drone was shot down near Ain al-Asad Air Base in western Iraq, a coalition official said. Two other drones were downed near the base on Jan. 4. And two drones were shot down near Baghdad International Airport on Jan. 3, the second anniversary of the U.S. airstrike that killed Iranian Maj. Gen. Qasem Soleimani, then-head of the Iranian Revolutionary Guard Corps-Quds Force.

The drones shot down near Baghdad International Airport reportedly had the words “Soleimani’s revenge” and “revenge operations for our leaders,” written on them, according to the Associated Press.

While it is not clear who is behind the recent drone attacks, Pentagon spokesman John Kirby told reporters recently that “these kinds of attacks are very much in keeping with the kinds of attacks we’ve seen from Iran-backed militias in Iraq and in Syria.

The U.S. military launched airstrikes in February and June 2021 that targeted Iranian-backed groups including Kata’ib Hezbollah and Kata’ib Sayyid al-Shuhada. More recently, the top U.S. general in Iraq and Syria blamed Iranian-backed militia groups for a recent indirect fire attack on a Syrian Democratic Forces base, prompting the U.S.-led coalition to return fire with artillery.

“The coalition reserves the right to defend itself and partner forces against any threat, and will continue to do everything within its power to protect those forces, Army Maj. Gen. John W. Brennan, Jr. said in a Jan. 5 statement.

U.S. troops in Syria have also been attacked by drones in October and again in December. While U.S. special operators tested the SMASH Fire Control System against drones in 2020, U.S. Special Operations Command ultimately decided not to field the advanced fire control system.

Drones have become an increasingly dangerous threat against U.S. troops in recent years. During the battle for Mosul, ISIS used small, store-bought drones to drop mortar rounds on Iraqi troops. Since then, both U.S. and British fighter aircraft have shot down drones over Syria; drones have been used in assassination attempts in Iraq and Venezuela; and Iran launched a successful drone swarm attack against a Saudi oil processing facility in 2019.

Russia has used drones as artillery spotters to wipe out Ukrainian troops who believed they were far enough behind the front lines that they were safe. Azerbaijan also effectively used drones to target and destroy Armenian tanks and other armored vehicles during the 2020 war over the Nagorno-Karabakh region.

While the U.S. military has fielded various technologies to jam or shoot down drones, including a laser aboard the amphibious assault ship USS Portland, American forces remain vulnerable to drone attacks.

Financial Times reporter Katrina Manson recently revealed that U.S. troops were unable to shoot down a drone that flew over an Iraqi base in 2019. Shortly afterward, the base was attacked by rockets, killing an American linguist. U.S. military officials determined the drone could have been used to help target where the rockets would land.

Another drone was seen hovering over the base after the attack, likely conducting a battle damage assessment.

Marine Gen. Kenneth McKenzie Jr., head of U.S. Central Command, has described the proliferation of drone technology along with the military’s lack of reliable ways to counter them as the greatest threat to U.S. troops since insurgents began using improvised explosive devices in Iraq.

“These systems are inexpensive, easy to modify and weaponize, and easy to proliferate,” McKenzie said in February. “They provide adversaries the operational ability to surveil and target U.S. and partner facilities while affording plausible deniability and a disproportionate return on the investment, all in our adversaries’ favor.”