"In order to avoid adding to the attention and pressure this trainee is facing ... we will not address specific details." 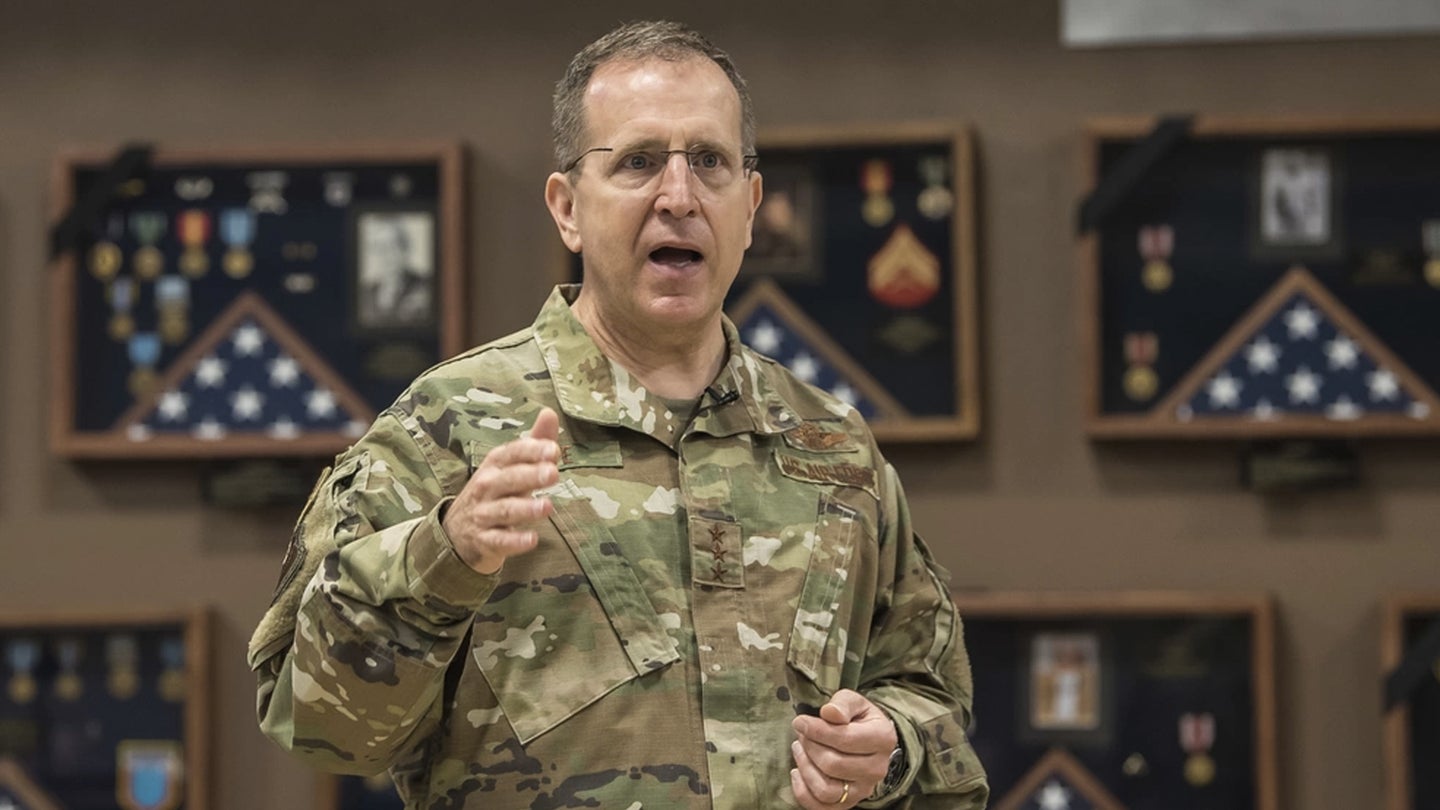 “[M]ost of what the author asserted about this trainee’s experience is either factually incorrect or missing important context which would completely change the perception,” said Lt. Gen. James “Jim” Slife in a Facebook post on Thursday.

Slife was responding to a story that was widely shared on the unofficial Air Force subreddit, Twitter, and even the Instagram account of Rep. Dan Crenshaw (R-Tex.). Written by an anonymous source claiming to be an Air Force combat controller, the story detailed how a female special tactics officer quit the challenging selection process and training pipeline multiple times, only to be reinstated by the leadership of AFSOC and the 24th Special Operations Wing.

The Air Force special warfare selection process and training pipeline is among the most difficult in the world. For example, the two-year combat controller training pipeline historically washes out 70 to 80% of its candidates. Air Force combat controllers and pararescue jumpers are trained to the same technical and physical standards as other special operators such as Army Green Berets and Navy SEALs. However, combat controllers and PJs also receive extensive training in the form of air traffic control and combat medicine, respectively, so they can control a crowded airspace, call in airstrikes, and evacuate wounded friendly troops from deep behind enemy lines.

Very few women have attempted the Air Force special warfare pipeline since the positions were opened to them in 2015. In April 2021, Sandboxx reported that a female airman had passed selection and was in the process of becoming a combat controller, while three other women were also somewhere in the pipeline. When asked by Task & Purpose, AFSOC spokesperson Capt. Savannah Stephens declined to specify how many women are currently in the special warfare training pipeline in an effort “to not create unfair pressure,” she said.

That pressure may have turned up even more now that the story written by the alleged combat controller has been released. According to the story, the airman first quit in 2018 during Special Tactics Officer Phase II, which the author described as a “challenging, week-long selection process to get into the” special tactics community. The airman quit during a pool session, but was still given the chance to finish, the author said.

The author shared the name of the airman, but Task & Purpose is referring to her only by her rank of captain until more aspects about the story can be confirmed.

“It is against societal norms for the [special tactics] community to keep a quitter through the entirety of Phase II,” the author wrote. “[H]owever, since [the captain] was one of the first females to go through Phase II, the hype of having a female present radiated through the community.”

The way it was posted to social media, the story cuts out after the 2018 STO Phase II training and picks up again in January 2020, when the captain began the two to three year STO training pipeline at Hurlburt Field, Florida. This was where the captain “quit during various points of her training,” including once during a pool session in front of multiple other students, but was kept in the course anyway, the author said. The captain was then “allowed to attend a special offering of a more relaxed version of the Pre-Dive course.”

Later, the captain “self-eliminated” again during a solo land navigation event. When that happens, pipeline students usually return to their previous duty assignment, reclassify to another job or leave the military, the author explained. Instead, the captain “met with numerous senior leaders” from the 24th Special Operations Wing and AFSOC.

“The SOW Commander (at the time), Col. Matthew Allen, and vice commander, Col. Allison Black, talked to [the captain] about staying in the training pipeline despite her effort to self-eliminate/quit,” the author wrote. The colonels even offered the captain “a highly selective spot at a Tier One Special Mission Unit,” despite that unit typically requiring an entirely separate selection process, the author said.

Things got even more complicated in the spring of 2021, when the captain wrote an after-action report that was sent straight to Lt. Gen. Slife. The AAR “launched an investigation into the treatment of women in the AFSOC community,” the author wrote. “Operators, students, instructors and leaders from across the community were questioned about their interactions with [the captain] and the future of women in the organization.”

Later that spring and summer, the captain went to work directly for Lt. Gen. Slife, where she “worked to audit courses and designed new combat control standards,” the author said. While there, the captain also filed an equal opportunity complaint “which painted a false narrative that instructors from the 352nd Special Warfare Training Squadron coerced her into quitting the pipeline,” the author wrote, despite the captain being “known to tell other ST trainees that she quit of her own free will and that she disliked the ST community as a whole.”

Finally, in December, special tactics airmen were informed that the captain’s training status would be “actively re-instated on 3 January 2022, despite her choice to quit and her negative viewpoint of ST,” the author wrote. She would pick up the pipeline where she left off, as per the wishes of Slife and Col. Jason Daniels, the current 24 Special Operations Wing commander, the author said.

Internet commenters said the account was a damning portrait of standards slipping for the sake of political correctness.

“To be clear, there are lots of females that contribute enormously to Special Operations missions,” wrote Rep. Crenshaw, a Navy SEAL veteran, in his Instagram post. “But they get to that point by following strict standards which ensure they can be relied upon in combat. Subverting those standards will cost lives.”

Slife pushed back on the account, however, saying it was incorrect or missing context. But neither he nor his command offered any specific examples of parts of the story that were inaccurate.

“For privacy and operational security, we will not further discuss specific details surrounding any individual candidates’ selection and training progression to not create unfair pressure,” Stephens said. “All candidates must meet the standard requirements and are assessed equally on their ability to lead in physically and mentally challenging environments.”

“We do not have information on a EO complaint, if filed, these details would be protected under the privacy act,” she said.

One thing Slife did write extensively about was the difference between standards and norms.

“The anonymous email’s author is concerned about training standards,” the general said. “We can unequivocally say the standards—which are tied to mission accomplishment—have not changed.”

While the standards remain the same, the norms have not, Slife said.

“How we bring trainees through the training pipeline today is different than the way we brought them through the pipeline 15 years ago because our understanding of the best way to get trainees to meet standards and be ready to join the operational force has evolved,” he explained. “It will continue to do so.”

Slife then called the author’s story an example of cyber-bullying.

“Singling out a fellow service member for public abuse is bullying and harassment, which are unacceptable deviations from both our standards, our norms and values as airmen,” he said.

The female captain is not the first woman to face criticism for attempting a special operations pipeline. For example, Capts. Kristen Griest and Shaye Haver, the two first women to graduate Army Ranger School, were offered the chance to start the training over again along with five male candidates after failing the first phase twice. When they finally graduated in 2015, they were accused of passing the course under lowered standards.

“They basically had too [sic] pass them from my understanding,” wrote one Facebook user, according to ABC News. “Obama had already made plans to speak at their graduation before they even graduated.”

In response, the U.S. Army Fort Benning Facebook page clarified that both male and female Ranger candidates are allowed to recycle, and the female students were given the same opportunities as male students.

“I’m definitely glad I took” the chance to recycle, Griest told Military.com. “I didn’t hesitate to take any chance to continue the course.”

Until AFSOC reveals more details about its female special warfare candidate, it’s unclear how much of the account is true. What is clear though, is that there is a perception the military will lower training standards in order to graduate its first female special operators. That perception has been around as long as women have been in the military but has intensified since 2015 as ground combat jobs previously closed to women were opened up to them.

Despite not being officially allowed in combat units until recently, women have fought capably alongside their male peers for years.

“I’ve stood in combat next to men who had no right being there and had no business being there, and I’ve stood next to women in combat who were fighting just as hard as any other man out there,” Medal of Honor recipient former Marine Sgt. Dakota Meyer told Task & Purpose in 2019. “As long as the standard is met, I don’t see that there’s any argument against women serving in combat.”

It’s the standards which keep coming up as the flashpoint for debates about women serving not just in special operations, but across the military. Capt. Griest herself weighed in on the debate in regards to the new Army Combat Fitness Test last February, criticizing the Army’s plan to separate soldiers’ test scores by gender.

“Once the Army determines the right standard to which soldiers should train, the final version of the ACFT should hold men and women in combat arms to it equally and should maintain branch-based minimum standards,” Griest wrote. “Failing to do so will further marginalize women in these units rather than protect them, and will hurt the Army rather than prepare it.”

As shown by the recent account of the Air Force special warfare candidate, any perception that the standards have been lowered ignites a firestorm. And that leaves the Air Force in a bind over whether to reveal more details on how much of the account is actually true.