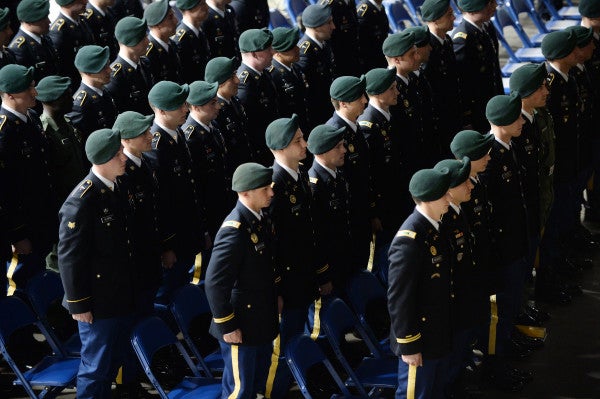 For the first time ever, a woman is nearing graduation to join the ranks of Army Special Forces.

According to the New York Times' Thomas Gibbons-Neff, a female National Guard soldier is “in the final stage of training” before graduating to join the Green Berets as an engineer sergeant.

U.S. Army Special Operations Command did not immediately respond to request for comment from Task & Purpose, but told the New York Times they could not release information about the soldier because of security concerns.

Military officials told the New York Times that the soldier is almost guaranteed to graduate, though nothing is official and some soldiers have been forced to withdraw near the end of training due to injuries.

One other woman is also currently in the qualification course known as Q Course, per the New York Times.

According to the Army, the training course to become a Green Beret lasts approximately 53 weeks, and tests soldiers on marksmanship, counterinsurgency, urban operations, live fire maneuvers, and other skills. During one 13-week phase, soldiers are tested over interagency operations, and “Special Forces common tasks,” and take part in Survival, Evasion, Resistance and Escape (SERE) exercises.

During one phase of training, the soldiers are organized into squads and “inserted into a fictional country, known as Pineland, which is made up of several counties spanning North Carolina.

“Pineland is rife with political turmoil, and candidates must navigate the region and complete a specified mission,” according to the Army's Special Forces website. They are also tested over 25 weeks on the language they were assigned to — such as Arabic, Thai, Russian, Korean, and more.

The Green Berets welcoming the first female soldier would be one of the biggest achievements for women in the U.S. armed forces since the Defense Department opened up all combat roles to women in 2016.

In 1981, Capt. Kathleen Wilder became the first woman to be qualified for the Special Forces after she was initially not allowed to graduate. As the New York Times reported at the time, Wilder was told she failed a field exercise just before graduation. She filed a sex discrimination complaint, and it was determined that she “had been wrongly denied graduation.”

In 2017, the Army's elite 75th Ranger Regiment welcomed its first female member. Since then, more than 40 other women have followed suit, completing one of the toughest leadership courses in the U.S. military.