"It is a big deal to be the first enlisted females in the National Guard graduating Ranger School ... It's groundbreaking" 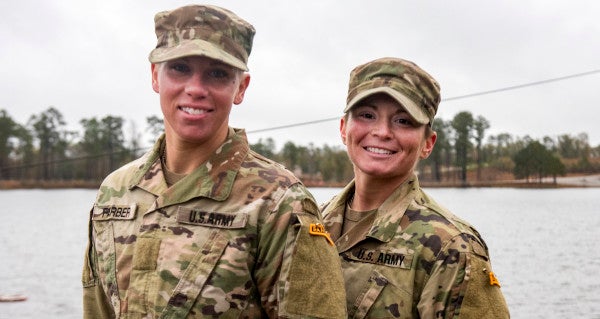 In yet another first, two female National Guard soldiers have graduated from the U.S. Army Ranger School.

Staff Sgt. Jessica Smiley and Sgt. Danielle Farber completed the grueling leadership course in the Army on Dec. 13, according to an Army release. They join a growing group of women who have earned their Ranger Tab since the Pentagon fully opened the course to them in 2015.

“My mindset going into this was to leave 100 percent on the table and never have regret or look back and say, 'I should have pushed harder or I should have done something different,'” Smiley said in the release. “My mindset today is that I did just that. I gave 100 percent. I did everything that I could, and now here I am.”

Farber, a Pennsylvania National Guard 166th Regional Training Institute Medical Battalion Training Site instructor, has had this day in her sights since 2016, when she was rejected for the Pennsylvania Ranger/Sapper state assessment program, per the release. In 2018 she went out for it again, this time succeeding, and left for Ranger school a year later.

Smiley, a South Carolina National Guard military police NCO assigned to Army Training and Doctrine Command, called her graduation day the “beginning of the new chapter in my career, not only for myself but for future soldiers.”

In 2015, the first women to ever complete the course, Capt. Kristen Griest and 1st Lt. Shay Haver, received their Ranger Tabs. Then, in 2018, the first enlisted female soldier, Staff Sgt. Amanda Kelley, received hers. This year, Air Force 1st Lt. Chelsey Hibsch joined their ranks as the first female airman to receive the tab.

Army Command Sgt. Maj. Russ Vickery, the South Carolina National Guard command sergeant major, stressed in the release that physical size of a soldier “is not the limitation,” and that it's all about the “heart and soul” a soldier brings to the challenge.

“It is a big deal to be the first enlisted females in the National Guard graduating Ranger School,” he said. “It's groundbreaking.”