It’s official: A woman is joining the ranks of Army Special Forces for the first time in history

A female National Guard soldier has successfully graduated from Army Special Forces training and is joining the elite Green Berets for the first time in U.S. military history 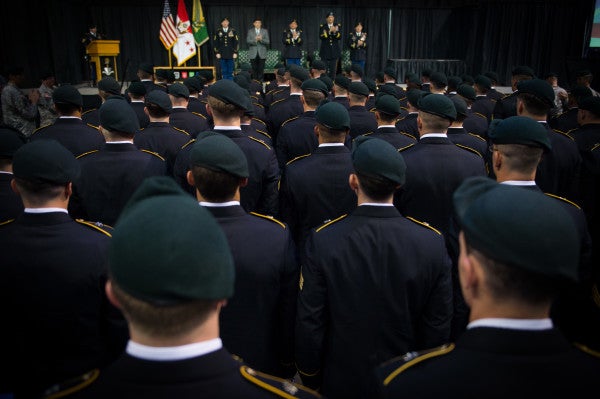 A woman has successfully finished Army Special Forces training and is joining the elite Green Berets for the first time in U.S. military history.

“From here, you will go forward and join the storied formation of the Green Berets where you will do what you are trained to do: challenge assumptions, break down barriers, smash through stereotypes, innovate, and achieve the impossible,” Lt. Gen. Fran Beaudette, commanding general for U.S. Army Special Operations Command, said in a press release on Thursday.

“Thankfully after today, our Green Beret men and women will forever stand in the hearts of free people everywhere.”

The New York Times first reported that the woman, an enlisted National Guard soldier, was nearing the finish line of the Special Forces qualification course known as Q Course. The training is broken up into six phases which focus on things like small unit tactics, language and cultural training, unconventional warfare, Special Forces tactics, and more.

She was in the final stage of training in February, and completed it in June. According to Military.com, she still had the “final counseling phase” left to finish before graduation.

The accomplishment is a huge one for not just the Army, but the U.S. armed forces as a whole. While former Secretary of Defense Leon Panetta started the process of allowing women into combat roles in 2013, it wasn't until 2015 that all jobs were made available to women.

“There will be no exceptions,” former Secretary of Defense Ash Carter said in 2015 when announcing the shift. “They'll be allowed to drive tanks, fire mortars and lead infantry soldiers into combat. They'll be able to serve as Army Rangers and Green Berets, Navy SEALs, Marine Corps infantry, Air Force parajumpers and everything else that was previously open only to men.”

Joe Kent — a retired Army Special Forces chief warrant officer whose wife, Navy Senior Chief Petty Office Shannon Kent, was killed in 2019 in Syria — wrote in Military Times that there is currently a “silent sisterhood” of female soldiers fighting and dying alongside Special Forces, though they've been “limited by their job titles.”

“If a woman is good enough to be deployed to combat for service on the frontlines alongside special operators, she deserves a shot at earning a permanent spot on the team,” Kent said.

Thursday's milestone comes around 40 years after the first woman qualified for the Special Forces — though she wasn't able to graduate.

In 1981, Capt. Kathleen Wilder, 29 at the time, was told “just before graduation” that she failed a field exercise and was no longer a candidate. After filing a sex discrimination complaint, a one-star general who investigated found that she had “been wrongly denied graduation,” per the New York Times.

“It isn't important that I wear the hat,” Wilder told the Times. “I'm not at all hung up on a hat like a lot of the men are … What matters is that I'm officially qualified.”