Why The Defense Department Needs To Cancel The F-35 Program

The F-35 Lightning II, otherwise known as the Joint Strike Fighter, has a lot of critics and a lot of... 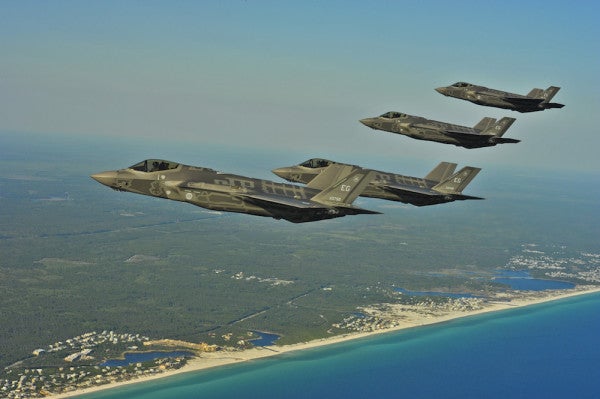 The F-35 Lightning II, otherwise known as the Joint Strike Fighter, has a lot of critics and a lot of supporters. To cut through the debate currently being waged on the aircraft it is important to point out four facts about the situation the Department of Defense finds itself in: The F-35 is behind schedule and over-budget; it  isn't delivering the capabilities the military needs; the world is vastly different from the one in which the F-35 was envisioned; and fourth and most importantly, the DoD has cancelled, or terminated early, massive weapons programs in the past for similar reasons.

Focusing on the final fact is most important for this debate. The F-22, the Army's Comanche helicopter, and the Navy's Seawolf submarine are all case studies of programs that the military invested in, but ultimately cancelled despite heavy industry opposition and sometimes great technical results.

Though there are been many critiques of the troubled F-35, few leave little hope for anything being done because the program has long been dubbed “too big to cancel.” To date, the cost of building the aircraft has been projected at $400 billion spread across 11 countries and 46 states, with a lifetime cost of up to $1.5 trillion (See Business Insider’s great infographic breaking down these costs by states and countries).

Congress has approved over $83 billion in spending for the F-35 with the lifetime cost of the airframe being estimated at $1.62 trillion. However, with an acquisition-focused secretary of defense and Sen. John McCain as the new head of the Senate Armed Services committee, now is the perfect time to draw a line in the sand against programs that consistently fail to meet deadlines on budget and reform acquisition strategy.

The immediate comparison that can be drawn to the F-35 is the F-22. The premature ending of this program was forced on the Air Force by the DoD in 2009 when then-Secretary of Defense Robert Gates said, “We must break the old habit of adding layer upon layer of cost, complexity, and delay to systems that are so expensive and so elaborate that only a small number can be built…” The disagreement between Air Force leadership and Gates was so severe that some say it blazed the trail that eventually led to the firing of both the Air Force chief of staff and secretary.

The cancellation of the program came at the height of the fighting in Iraq, when more money was needed for the fight today instead of a potential fight in the future. In his memoirs, “Duty: Memoirs of a Secretary at War,” Gates seems exasperated by an Air Force wanting to spend money on amazing new technology that had no bearing on the current fight. There are similar parallels to today when the Air Force has a drone shortage, is trying to cancel an exceedingly successful weapons platform, and is trying to field a new platform that cannot meet the needs of the current fight. In an era of declining defense budgets, it is more important than ever to spend every dollar on programs that work and are relevant than to invest in advanced stealth technology which, in the form of the F-22, has seen very little combat since becoming operational.

If the F-22 is a case study on why we should cancel the F-35, the Comanche helicopter shows how it can practically be done through Congress. The Comanche was the Army's $6.9 billion program to develop a stealth helicopter until 2004 when the 22-year-old program was abruptly canceled by the Army itself. Just after seemingly getting the program back on track, the Army decided the program, which was forecast to consume 40% of the Army aviation budget, was no longer needed in the current fight and shifted the money other Army aviation programs.

This shift is the key lesson to be drawn from the Comanche. Congress continually provides funding for programs the services do not request. This would likely also be true if the DoD tried to cancel the F-35. According to Lockheed Martin, the program employs 125,000 people in 46 states, meaning there are many senators and representatives lined up to support the programs. However, like the Army did with the Comanche, the DoD could work with Congress to reinvest the money saved from the F-35 into other programs in the same states.

Service life and avionics upgrades to the F-16 could be expanded and accelerated. Money would be available to move forward with Super Hornet improvements. Instead of divesting the entire aircraft inventory for a single problem plagued replacement, the service could reinvest in proven airframes to ensure their superiority. This approach can keep the congressional heat off the DoD by showing the direct link between how every F-35 dollar saved will be spent on another program in a way that will garner just as much if not more taxpayer support.

A similar tactic could be used with the F-35’s international partners. Canada, one of the original international partners in the program, has already dropped out due to costs. Others are on the fence or buying other aircraft to fill the gap caused by delays in the F-35 program. Incorporating the needs of allies into the program cancellation will be necessary to ensure their willingness to cooperate on future programs. These needs may necessitate continued F-35 expenditures in the short term for nations like the United Kingdom, which has a carrier already built and waiting for F-35s to arrive. Those nations still wanting the aircraft may actually get them faster if the U.S. stops taking deliveries of jets.

Though cancelling the F-35 can support today's aircraft, the constant worry is about tomorrow’s fight. During an interview with 60 Minutes, Chief of Staff of the U.S. Air Force Gen. Mark Welsh pointed out that “air superiority is not a given.” He made clear that if put against newer aircraft from Russia and China, our current legacy fighter aircraft would not survive the conflict. The U.S. will still need to find a way to counter this threat and the cancellation of the Navy's Seawolf submarine shows how strategically ending an acquisition program can result in a better follow-on program. The Seawolf was designed in the mid-1980s to counter the large Soviet submarine threat and replace the aging Los Angeles-class attack submarines. Despite promises, and eventual delivery, of amazing performance, the disappearance of a planned adversary and 25% cost overruns led President George W. Bush to limit the program to only three of twelve proposed submarines in 1992.

Like with the F-35, this left the Navy with the need to replace an aging fleet of submarines, but no active program to solve the problem. Here is where the Navy learned its lesson. Though amazing pieces of technology, the Seawolf program was too expensive and was trying for too many technological advances. The key to weapons of the future is their ability to fulfill the mission and survive in a fiscally constrained environment. In developing the Virginia-class submarine, the Navy eliminated requirements that “were unrealistic and would not be worth the cost needed to achieve them.” The Virginia-class ended up costing $2.2 billion less per submarine and each delivery occurred under budget and ahead of schedule. Perhaps trying to make a single aircraft capable of stealth air-to-air engagements, close air support, carrier landings, and vertical takeoffs should be considered “unrealistic and would not be worth the cost needed to achieve.”

With the GAO estimate that the operating and support cost for the F-35 fleet will be $8.8 billion more per year than the combined cost of the various aircraft fleets it is supposed to replace, it would likely be more cost effective to create multiple aircraft for each requirement. For fights in a contested area, a new program should be developed relying on existing technologies. Lockheed Martin built both the F-22 and the F-35; certainly it can incorporate the lessons learned from both aircraft, with no new technical requirements from the DoD, and rapidly design an aircraft that can serve as a basic, low-observable attack aircraft. The Marine Corps wants its own close support aircraft, so the lessons learned from the F-35 should be incorporated into an aircraft with vertical/short takeoffs as its primary goal and isn’t constrained by the need for stealth.

The DoD budget has decreased by over 15% in the last five years. Any acquisition program that does not place life-cycle cost savings as one of its most important goals does not represent a smart strategy for the future. Instead of focusing on the newest technology, the DoD, and the Air Force in particular, needs to focus on the right technology.