The Department of Defense is preparing to test-fire a next-generation hypervelocity projectile (HVP) — a supersonic shell that can hit... 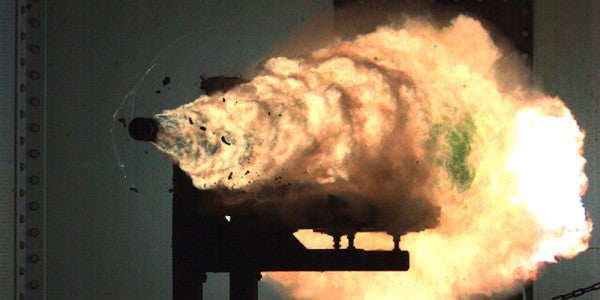 The Department of Defense is preparing to test-fire a next-generation hypervelocity projectile (HVP) — a supersonic shell that can hit targets up to 100 nautical miles away at speeds approaching Mach 6 — in the next year, defense officials announced on Jan. 25, a development that could significantly augment that Pentagon’s existing missile defense systems.

The Navy’s Office of Naval Research started developing the HVP more than a decade ago as ammunition for its vaunted electromagnetic railgun system, and the Pentagon’s secretive Strategic Capabilities Office announced in 2016 that it had also engaged Army and Air Force to quickly develop a new Hypervelocity Gun Weapon System for the lethal new projectile. The platform’s applications are mainly defensive, protecting critical bases, ports, and warships from incoming missiles.

Speaking at the Center for Strategic and International Studies in Washington, HVP program manager Vincent Sabio declined to provide details on the new and improved projectile, beyond saying that the shell is engineered to defeat several different threats — with capabilities beyond the existing shells produced by defense contractors BAE.

“There may be different modes that it operates in,” Sabio said of the projectile. “We may tell it shortly after it comes out of the gun which type of a threat it is going after, and it will configure itself for that type of threat in terms of the dynamics — how does it maneuver, how does it close on the threat.”

Sabio argued that the new HVP could soon offer a lost-cost alternative to the standard Patriot Advanced Capability-3 (PAC-3) interceptors that fill mobile THAAD batteries around the world. At an estimated $3 million a shot, the DoD can only field so many Patriots at a time, Sabio said, resulting in sparse U.S. missile defense arsenals — and, in turn, allowing U.S. adversaries to literally “count interceptors” due to the easily identifiable profile of THAAD batteries.

“They know where our sites are, and they can simply play what we call the ‘plus-one game,’” Sabio said at CSIS. “They know if you have x number of interceptors, the absolute most they need to throw at you is x threats. And once you have fired your x interceptors, they pretty much own you.”

Patriot missiles also cost more, Sabio said; by contrast, the Navy’s PEO Integrated Warfare Systems office put the cost of an HVP around $85,000. That’s more than previous 2016 estimates of between $35,000 and $50,000 but significant savings over the cost of a single PAC-3.

With Patriots, “Our finger pauses over the fire button just because we know every time we push it we’re pushing a fair amount of money out of that launcher,” Sabio said. But with HVPs, “You can shoot a lot of those things and not feel badly about it.”

Beyond cost, the new HVP will offer a major tactical boost for forces downrange. While the DoD’s existing land- and sea-based interceptor vehicles perform fine against ballistic missiles, Sabio said, they don’t offer an optimal chance of success against incoming cruise missiles or hypersonic weapons — the latter of which have become a major focus for the China and Russian militaries and, in turn, necessitated a similar technological response from the Pentagon.

“We need to be able to address (all) types of threats: subsonic, supersonic; sea-skimming, land-hugging; coming in from above and dropping down on top of us,” said Sabio. “There are many different trajectories that we need to be able to deal with that we… cannot deal with effectively today.”

And rather than rely on the massively-complicated electromagnetic railgun to accelerate projectiles up to Mach 6, the next-generation HVP projectiles could end up firing from the Army’s 155 mm howitzers or the 5-inch deck guns aboard Navy destroyers and cruisers. Theoretically, wherever the Pentagon can send a giant gun, SCO’s beloved super-bullet can go, as well.