During the recent Republican debate, presidential hopeful Mike Huckabee chose the venerable B-52 Stratofortress to exemplify how the military was... 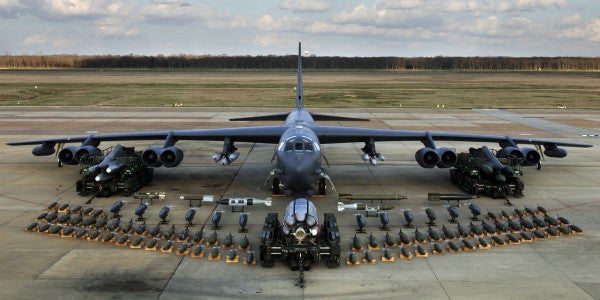 During the recent Republican debate, presidential hopeful Mike Huckabee chose the venerable B-52 Stratofortress to exemplify how the military was being hobbled by declining defense spending. But as some commentators have explained, his example was a poor choice. The B-52 served well over the past decade, sporting a higher mission-capable rate in 2012 than newer bombers like the B-1B Lancer and the B-2 Spirit. Boeing estimates the B-52 fleet’s lifespan to last until the 2040s, but the Air Force hopes to begin replacing them in the next few years with a new aircraft developed from the Long Range Strike Bomber program, as well as another bomber project projected for 2037. When the B-52 finally retires, it will be around 90 years old; a testament to the aircraft’s capable design.

Huckabee may be surprised to hear that the B-52 isn’t the only seemingly geriatric weapon system still active; here are some of the oldest weapons still in service.

Nicknamed the “Ma Deuce,” or simply “The Fifty,” the M2 Heavy Barrel has been in service since 1933. Designed by legendary firearms inventor John Browning and produced by Belgian manufacturer FN Herstal, the M2 saw extensive use in World War II in just about every configuration imaginable. The M2’s round granted the gun a myriad of roles with aircraft, ships, and infantry crews. M2s have seen service in every American combat operation since and also serve in numerous other national militaries. In 1968, the M2’s replacement, the M85, was introduced. It was mounted on vehicles like the M60 Patton tank and LVPT-7 amphibious assault vehicle — an infantry-support version was also developed. But the new machine gun suffered from so many reliability issues that the M2 supplanted the weapon intended to replace it. The M2 continues to serve on countless different vehicles in the U.S. inventory, and has been combined with new technology like the Common Remotely Operated Weapon Station. With another potential M2 replacement recently canceled, “Ma Deuce” seems primed for another few decades of services.

This iconic tandem-rotor helicopter made its combat debut in 1966 during the Vietnam War and was given the iconic role of lifting artillery pieces into the numerous firebases littered around South Vietnam. A gunship variant called the ACH-47A also served in limited numbers. The Chinook’s advantages became readily apparent during Operation Enduring Freedom, as it could operate at the high altitudes of mountainous Afghanistan more readily than other helicopters in the U.S. inventory. The two main variants of the CH-47 in service are the CH-47F, flown by the conventional Army aviators, and the MH-47G, a special operations version with advanced avionics and in-flight refueling capability that’s flown by the elite pilots of the 160th Special Operations Aviation Regiment.

The Army eventually wants to replace the CH-47 with an Opsrey-esque, tilt-rotor aircraft developed under its Future Vertical Lift program, but that initiative will focus first on developing a replacement for the UH-60 Black Hawk family of helicopters. In the meantime, the Army is planning upgrades to the Chinook that will extend its service life to an unprecedented 99 years.

At over 65 years old, this 84 mm recoilless launcher still maintains an imposing presence on the battlefield. Developed for the Swedish military in 1948, the Carl Gustaf first entered into U.S. service when the 75th Ranger Regiment needed a replacement for its M67 recoilless rifles in the late 1980s. Designated the M3 Multi-Role Anti-Armor Anti-Personnel Weapon System and nicknamed the “Goose,” the Carl Gustaf quickly became popular with other U.S. Special Operations Command units. The Goose proved an effective weapon against fortified bunkers, caves, and compounds in Afghanistan; in response, the Army began equipping regular units with the weapon.

The Carl Gustaf has endured for so long due to its versatility; the weapon fires a range of ammo types such as anti-tank, high explosive, and illumination rounds. Manufacturer Saab Defense and Security USA has introduced a new version, the M4, with computer optics and other improvements, which the Department of Defense has agreed to evaluate over the next two years.

This airlift workhorse holds the record for longest continuous production run of a military aircraft. The C-130 Hercules family of aircraft have served the Air Force and other services since 1954, performing numerous different roles. The vaunted AC-130 operates as a special operations gunship, and the MC-130 performs insertion/extraction and resupply of special operations units. Other roles include electronic and psychological warfare, midair refueling, search and rescue, and many more. The latest production model, the C-130J Super Hercules, features a new all-digital avionics suite, new engines, and improved six-bladed propellers made out of composite materials. The Hercules will soldier on in many roles until at least the 2030s when the Air Force will begin to roll out the results ofthe C-X Next Generation Airlifter program.

The M240 7.62×51 mm medium machine gun is a mainstay of infantry units in the Army and Marine Corps, providing the ability to sustain automatic fire at extended ranges. While the M240 first entered U.S. military service in 1977, the design has been around a lot longer. The M240 is essentially a modified version of the Fabrique Nationale MAG machine gun, which entered production in 1958. In addition to the M240B and M240G infantry models, the M240 is also mounted on vehicles as a crew-served weapon, a coaxial machine gun on armored vehicles, and a door gun on helicopters.

Perhaps the only major drawback to the M240 is its weight at around 27 pounds unloaded. The weapon it replaced, the M60, weighed in at 23 pounds. The Army has worked to cut the M240’s weight with the M240L variant, which features titanium components and a collapsible buttstock that cuts the weight by four pounds. The M240 will likely stick around for a few more decades; new prototypes like the General Dynamics .338 light weight medium machine gun have been unveiled, but no known plans to replace the M240 exist as of yet.

While force modernization will always be a contentious issue, especially in the face of today’s budgetary realities, some old weapon systems remain as effective as they ever were. It’s difficult to understand Huckabee’s claim that the military is being hobbled by weapons that continue to excel decades after they were introduced.