A lot of dire warnings about future threats to the United States center around peer or near-peer adversaries. China and... 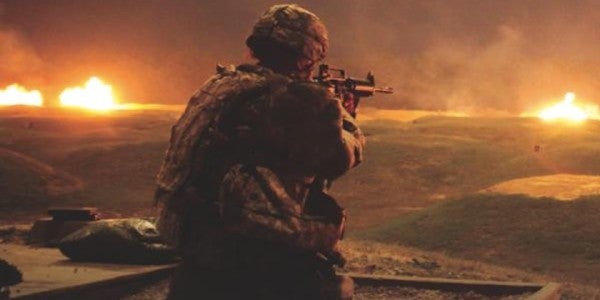 A lot of dire warnings about future threats to the United States center around peer or near-peer adversaries. China and Russia are often cited as boogeymen, especially among those advocating for a larger military. In the next echelon down, there are the less-capable, but fanatical: Iran and North Korea, made even more threatening by their potential nuclear arsenals.

Because of the allegedly extreme nature of these potential threats, we see our political and military leaders trying to execute a strategic pivot to Asia. This pivot usually includes a major increase in the U.S. military’s need for naval and air forces. Those increases typically emphasize technology, such as the F-35, new aircraft carriers with electromagnetic catapults, lasers, and anything with the word “cyber” in the name.

Maj. Gen. Robert Scales’ new book, “Scales on War: The Future Of America's Military At Risk,”takes on the issue of future threats from a very different perspective.

As a lifelong artilleryman, you might expect him to be a big war, heavy firepower advocate. While firepower has an important place, Scales advocates for centering the military around the infantryman. This isn’t the product of Scales having some sentimental attachment to the G.I. In his opinion, the past is prologue, and the fundamentals of warfare will remain the same. The center of gravity of the U.S. military is dead American troops. Recent history has shown that the U.S. does not tolerate heavy casualties. In combat, the group most at risk is the infantryman, so why not start with the grunt and work backward?

While Americans tend to venerate the decisive warfare waged by Gen. George Patton, Scales argues that Patton’s methods were the apex of the European era of warfare, marked by large-unit maneuver. We’ve entered the American era, marked by ambiguity, and best fought with what he terms “the McChrystal method.” It is small unit engagements, ambiguous situations, and complex issues with the local populace. The present presages the future, and that will continue to resemble what was once called the Three Block War.

Scales contends that the wars we are most likely to fight will be won or lost in close combat. China has no rational reason to fight the U.S. Russia can be deterred with a few brigades on its border. Scales contends that our future opponents will attempt to replicate the only tactic which has succeeded against the U.S. in recent history — gradually bleeding us dry at the tactical level of war. Therefore, Americans need to dominate at the tactical level to avoid that fate. Throughout the book, Scales is at his best when he points out simple truths that others ignore.

So what will enable Americans to prevail at close range? Scales speaks in terms of the mental, moral, and physical.

Scales talks about technology, but he concentrates on getting current or near-term technology to small units to affect close-combat engagements. Better rifles, a better designed personnel carrier, individual cellular comms, video feeds from every soldier, and the like.

He wants to further proliferate unmanned systems, so that no squad will ever fall victim to an ambush again. In particular, he makes a powerful analogy between the use of drones today and the adoption of automatic weapons during and after World War I. Most nations at the time saw them as large-unit assets, vastly underestimating the necessity of the new invention as an element of conflict as it now existed. Scales correctly argues that unmanned systems, particularly in their observation role, are as much a game-changer as machine guns were a century ago.

Scales pivots to much more novel ideas, using technology to enhance the human factor. For example, he proposes using MRI-type technology in helmets to measure when an individual soldier is about to reach his emotional limit in battle, allowing a leader to know when his unit is in danger of breaking. He sees communication devices proliferated to the level of the individual soldier not merely as a communication tool, but as a means of reinforcing each soldier’s resolve by increasing his situational awareness, but just as importantly, by reducing his feelings of isolation.

While his thoughts on unmanned systems are interesting, they aren’t unique. However, Scales’ ideas on using technology to enhance the mental and moral strength of troops are interesting, and go beyond the usual techno-babble of the military futurist genre.

Scales calls for realistic immersive simulations for infantry, similar to what exists for pilots today. He wants soldiers to have the same training opportunity. He wants the same type of intensive and realistic training that pilots receive at Top Gun or Red Flag to be the norm for infantry units and their leaders. This includes using realistic simulations to weed out those who make bad decisions in simulations, before they make them in combat.

This goes to one of the main thrusts of his work: making individual grunts and small-unit leaders into highly professional, proficient warriors. Technologically advanced weapons and gear are tools, but Scales emphasizes improving the craftsman. He calls for dramatically increasing the training and time devoted to building infantrymen. He wants to take the average infantryman to the level of a SOCOM Tier I operator.

This would require dramatically rethinking how the United States manages the force. For example, Scales proposes only taking second-term troops into the infantry to ensure they possess experience and psychological maturity. He wants a rigorous selection process to get in, and stay in, the infantry.

These ideas, and others like them in the book are worth further study. On their face, they are extremely appealing, but Scales doesn’t delve deep enough, into what military leaders call the second- and third-order effects. For example, he states that a computer programmer sitting at a desk in the Pentagon should not make the same amount of money as an infantryman. He further proposes that an infantryman would rate a retirement as soon as he becomes ineffective in close combat.

In just a few sentences, he thus proposes completely reconstructing the pay and retirement systems of the military. That might be a worthwhile idea, but a broader work would address how he’d address the gaping wound such a policy would leave in the military’s cyberwarfare capability. Making both pay and retirement contingent on occupational fields would drastically change the personnel budget and even military culture. That could be a very good thing, but Scales proposes ripping apart the military and putting it back together. The tradeoffs of such a proposal deserve more analysis than Scales provides.

It’s military leadership that Scales perhaps demands the most from. Scales wants our personnel system to help breed and nurture genius. Deep promotions, demanding graduate-level education for promising officers, and ensuring promotion boards select for intellectual prowess are some of Scales’ prescriptions for making sure military leaders can better employ the assets they have. He wants the military to be led by geniuses, not just those left standing after bureaucratic Fight Club.

These are improvements to the system that many officers and military reformers, including myself, have wanted the military to explore for some time. Again, though, he offers aggressive proposals without much discussion of the downsides or tradeoffs that necessary to implement them. Those changes wouldn’t just affect the infantry or combat arms. They would ripple throughout the military manpower system and require a top-to-bottom revamping of how the military manages its officers.

Throughout the book, Scales’ recommendations are common sense, well-reasoned, and easy to understand. One would be hard-pressed to offer counterarguments to any of them at first glance. Of course we need better trained infantry. Of course they need equipment better suited to the opponents the U.S. is most likely to face. Of course we need to nurture future military geniuses.

Scales’ prescriptions are largely right on the money as far as solving problems that exist on the ground for the infantry. But they do raise the question of how the military would pay for the medicine. His technological prescriptions are simple to assess in terms of cost, but his plans for the military’s training and personnel systems would require huge changes that the book doesn’t fully address. While leaving more detailed solutions out might be appropriate for an op-ed piece, in a book-length work, the reader is left asking what will happen to the rest of the military after we’ve fixed the infantry.

The problems with implementing Scales’ plans are not insurmountable, but in a zero-sum money and personnel environment, how to actually implement his solutions is nearly as much of a challenge as coming up with them in the first place.

Scales’ most useful prescription is his method. He starts small, with the individual soldier, then works his way out, vice working solely from the strategic level in. If the tip of the spear, the ground forces in contact with the enemy, are not trained and equipped to deliver overwhelming force, then all the “strategery” in the world is useless. It’s a perspective often lost in the discussions of the “force of the future.”

“Scales on War” is worth the time for that alone.

“Scales on War: The Future of America's Military at Risk,” 248 pages, is published by the Naval Institute Press.