An Infantryman’s Defense Of The A-10

I admit it, as a former infantryman, I’m a partial to the A-10 Thunderbolt II. I don’t mind that it’s... 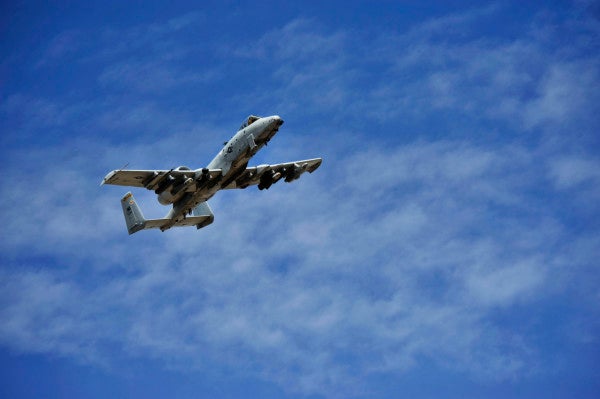 The Warthog was, is, and will be for the foreseeable future the premier close-ground support plane. And all the things that I mentioned above — its simplicity and weight — are what make it so effective at its job. The titanium armor encasing the plane makes it impervious to high-explosive and armor-piercing projectiles up to 23 mm. It can even take a few hits from 57 mm rounds. Parts of the cockpit interior is covered with a nylon spall to protect the pilot from fragmentation. In other words, this is a plane meant to fly low and slow, mix it up in close quarters with ground targets that can return fire, and get its hands a little bit dirty. The A-10 is notorious for being able to take damage and keep flying. It’s battle tested and soldier approved.

Those are the reasons for a grunt to like the A-10. But what an infantryman wants doesn’t always align with the needs of the Air Force. Since at least 2013, the Air Force has been considering phasing out the Warthog. Rebecca Grant, director of the Washington Security Forum, told National Defense Magazine in 2013 that the A-10 “has obviously done a tremendous job in Iraq and Afghanistan and lots of other places, but the Air Force has been looking to retire them for quite some time. Retiring the A-10 is not a new idea.”

Related: How the war on ISIS saved the A-10 from retirement »

Taking “if it ain’t broke, don’t fix it” as almost a personal creed, I’ve always found the push for the Air Force to retire the Warthog a bit mystifying. The cynical side of me is convinced that it’s a matter of forced obsolescence; that the kind of ground-support mission the A-10 makes possible just doesn’t interest the Air Force all that much. It’s not cool or cutting edge enough. And the manner in which the Air Force went forward with its plans to scrap the A-10 didn’t make me any less skeptical.

There was talk of replacing the Warthog with MQ-9 Reaper drones, F-16s, F-15s, even the B-1 bomber. Anyone with a passing familiarity with any of these aircraft understands that they could never seriously be considered as replacements for the A-10. In fact, Sen. John McCain responded to the B-1 suggestion when it was put forth during a Senate Armed Services Committee hearing with his patented brand of acid incredulity, “That’s a remarkable statement. That doesn’t comport with any experience I’ve ever had, nor anyone I know has ever had. You’re throwing in the B-1 bomber as a close-air support weapon to replace the A-10. This is the reason why there is … such incredible skepticism here in the Congress. You will not pursue the elimination of the finest close-air support weapon system in the world with answers like that.”

And for a while, that incredulity won the day. The retirement of the A-10 was postponed until 2022 and a suitable replacement for the A-10 would have to be found. I was personally overjoyed, at least until it was announced that the Warthog’s replacement would be the F-35, oh, and by the way, the very last A-10s will be phased out by 2022. That’s not when the retirement process begins. These two things come together to create a sort of perfect storm of disappointment. Of course the F-35 will replace the A-10. The F-35, the Joint Strike Boondoggle, the most expensive weapon in human history, the sub-contractor’s fantasy, the single be all end all solution to all of America’s air capability needs: The most famous plane that doesn’t actually work. This is the replacement for the tried and true A-10?

Maybe I’m being a little harsh on the F-35. In theory, it will eventually be able to provide close air support, albeit at a much higher cost to taxpayers and at a much further remove from actual ground combat (not necessarily a bad thing). And I get it, that’s the point, the Air Force wants something that stands less of a chance of getting shot out of the sky by MANPADS and can fly a greater number of sorties. But as an F-35 test pilot claimed in an interview, “The A-10 is always going to be better at CAS than an F-35.” Obviously so.

The A-10 was designed for one specific purpose. The F-35 was designed to do a lot of things really well. It’s easier to design a hedgehog than a fox, to adapt the old saying. But as Tyler Rogoway wrote for Foxtrot Alpha, “Maybe for international customers, the jack of all trades, master of none F-35 is a good deal, but for the USAF, who already has a 5th generation fighter that was built to kick down the enemy's air defenses, building another has been an expensive jobs program, a handout to industry and an unneeded luxury.”

In other words, use any of the other expensive platforms available to knock out enemy air defense before sending in the Warthogs.

Regardless, the A-10 is going to be scrapped much sooner than any of its defenders would like and I maintain a grunt’s natural skepticism at the over-reliance on complex, untested platforms that promise to solve all of our problems.

Can I mention again how badass the Warthog is?