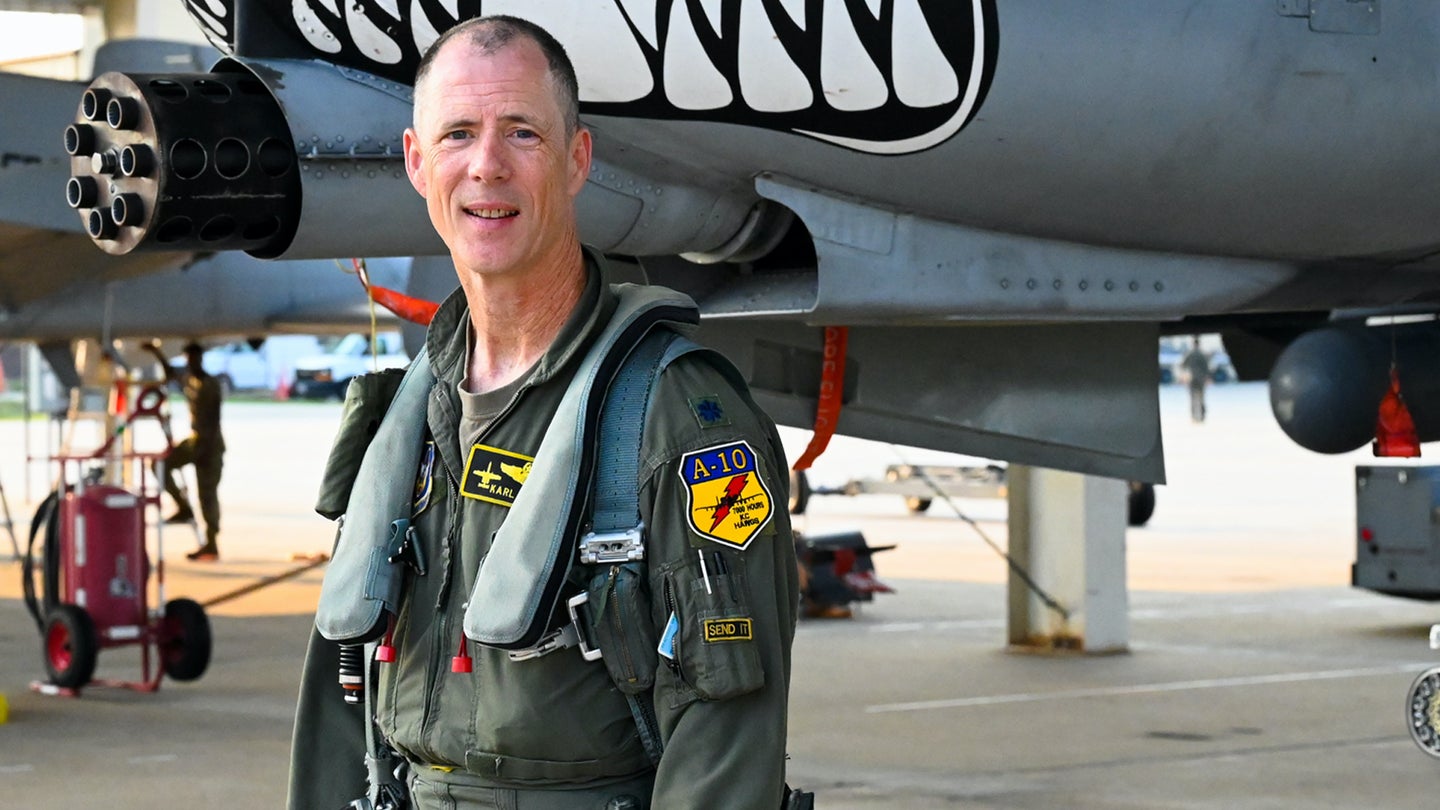 When Lt. Col. John “Karl” Marks took off from Whiteman Air Force Base, Missouri earlier this month, it wasn’t just another training sortie: it was a record-breaking flight that would firmly establish him as the most experienced A-10 attack plane pilot in history.

During the sortie, the 57-year-old Marks reached 7,000 hours of flight time in the A-10C Thunderbolt II across his 32-year flying career, more than any other A-10 pilot. For perspective, 7,000 hours is like spending a little over 9.5 months straight in the cockpit. The Air Force’s top pilot rating, command pilot, is earned after 3,000 total hours and 15 years as a rated pilot, which Marks has fulfilled more than twice over. You’d think someone might get sick of all that time behind the stick, but not Marks.

“I love flying the A-10,” he said in a recent Air Force press release. “Even after 32 years, it hasn’t gotten old. The technology has changed over time and our adversaries’ threats have also changed. You can’t sit still. You have to adapt and improve.”

Not only does he have a high quantity of flight time in his logbooks, but Marks also has high-quality time as well. His action in combat during the Gulf War in 1991 is one of the reasons why the A-10, also called the Warthog, is the most beloved close air support platform in the U.S. arsenal. On February 25th, 1991, the second day of the ground war, he and his wingman Capt. Eric “Fish” Salomonson set a record after destroying 23 Iraqi tanks in one day over the course of three missions.

“We got a bunch of backslaps when we got back, which was great, because we didn’t even expect any of that,” Marks told reporters when he and Salomonson were interviewed about their kill count in 1991. It was also a blast for the crew chiefs who maintain the jets, each of whom had a tally board for how many kills their jets have scored.

“They were all pretty happy with that,” Marks said.

At the time, Marks was a lowly lieutenant with only about 750 hours in the A-10, about a tenth the total he has now. But the Gulf War was far from the end of Marks’ 1,150 hours of combat time. In 2014, he used “every skill [he] ever learned as an A-10 pilot” to help a coalition unit get out of “an intense troops-in-contact situation where they were nearly surrounded by Taliban” fighters in Afghanistan’s Kunar Valley, he said. In 2018, he and Brad “Roadie” Jones also killed an entire force of elite Taliban ‘Red Unit’ fighters at night. With a record like that, Marks’ colleagues had a hard time describing just how much of a baller Marks is at flying ‘Hogs.

“7,000 hours. 3,610 sorties. 358 combat sorties in the A-10 … just incredible,” said Lt. Col. Ryan Hodges, the commander of the 303rd Fighter Squadron, when he presented Marks with a plaque commemorating his 7000-hour milestone. “No words can describe the caliber of leader and fighter pilot we have in our squadron.”

“Let’s just say I’m glad he is on our side,” said Col. Michael Leonas, commander of the 442nd Operations Group.

Despite his achievements, Marks doesn’t seem to have the arrogant swagger that fighter pilots sport in movies like “Top Gun.” When preparing for his milestone flight, Marks insisted that he fly with the youngest guy in the squadron, Lt. Dylan Mackey. Marks has been flying A-10’s longer than Mackey’s been alive, but Mackey’s father, Brig. Gen. “Jimmy Mac” Mackey, is a retired A-10 pilot who Marks flew with often throughout his career.

“It was pretty special to fly my 7,000th hour with his son Dylan today,” Marks said. “Dylan’s parents were both able to attend today and it was great to see them again.”

Marks’ flight with Mackey might also symbolize his role as a mentor within the 442nd Fighter Wing community.

“He is an outstanding attack pilot; he loves to fly, and his knowledge is an invaluable resource for the squadron,” said Brig. Gen. Mike Schultz, the wing commander. “If you stick around on a Friday afternoon, you may even hear a war story or two.”

Mackey agreed with that sentiment.

“He is one of the best fighter pilots in the Combat Air Force and to be able to say I flew with the longest flying A-10 pilot in the world is something I’ll remember forever,” he said. “Karl has so many tricks up his sleeve that I’m just trying to hang on and absorb everything I can. You are always guaranteed to learn something new flying with him.”

The respect is mutual.

“The quality and caliber of fighter pilots in today’s force keeps me young, keeps me humble, and motivates me daily,” Marks said.

Best of all, Marks, who first started flying during the Cold War (where he got his call sign “Karl,” though now he’s called “Cuda” when he’s airborne), doesn’t plan on stopping any time soon.

“I have at least three more years of flying until my current mandatory retirement age. I am hoping to extend that further to age 62 if the Air Force lets me,” he said. “It’s been a wild ride and I still have some flying yet to do.”