Sarcasm, Scotch, And Veteran Stereotypes Led This Former Marine To Produce His Own TV Pilot

Nearly two years ago, on a Friday evening in September 2013, I trudged home from work, clambered up the four... 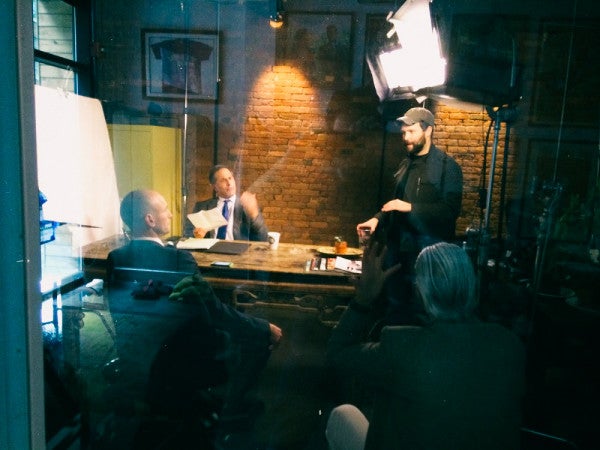 Nearly two years ago, on a Friday evening in September 2013, I trudged home from work, clambered up the four floors to my apartment, and cantankerously flipped open my laptop. By the following Monday, I had three empty bottles of scotch and the first draft of a comedy pilot with the ever so pun-tastic title of “Vetted.” It was a frustration-fueled introduction to the funny, weird, aggravating, and occasionally shocking side of being a veteran. After a lot of further frustration, hard work, and help, the finished, filmed pilot premiered this past March at the Tribeca Cinemas in New York to a full house. Since then, I’ve been working on getting my show to the next step any way I can, from pitching it to networks to trying to get a second episode funded through Kickstarter.

While the humor and liquor are ingredients in most things I do, all that frustration bears some further explaining.

In August 2012, two months after I went on terminal leave, I started working in a large, mind-numbing office at a major company. Initially a few of my new coworkers tried to coax stories of harrowing combat and near-death out of me, but after learning I had none to tell, not counting leave in Thailand, they lost interest in my previous job. Not only that, they found my time in the military an uncomfortable subject of conversation. After a month or so, the only time my service would ever come up was when our resident smarmy guy would point me out to a new female employee he was hitting on. His introduction of me was always something along the lines of, “This is Paul. He was in the Army, went to Iraq and blew people up.”

The thing is, I served in the Marines, not the Army. I deployed to Afghanistan, not Iraq. And I've never blown anyone up in my life. My name is, in fact, Paul, though. So there's that.

After the first few times, I stopped correcting him. I was a veteranand that was all there was to it. I'd been somewhere sandy and foreign, done some difficult things, was undoubtedly ever so brave and tough. Most of the people in that office had never even met a veteran outside their grandparents’ generation, let alone worked with one. Without any firsthand experience with people like me, and with most depictions of vets in media falling somewhere in the “pitiable yet heroic” to “terrifyingly damaged” range, it’s no wonder they wanted to keep some distance between themselves and my service. The last time people were able to see the everyday and funny, yet unique, side of veterans was when “Major Dad” was on the air — excluding the well-meaning and surprisingly well-written failure that was “Enlisted,” — so what else were they supposed to think? I was to be pointed out as an admirable curiosity by everyone who could claim to know me, and of course, so everyone could be ready in case I had one of those violent freak-outs you always hear about veterans having on the news.

With my status as a veteran a topic outside the comfort zone of my coworkers, it became harder and harder to talk to anyone about anything. That and my generally sarcastic and acerbic nature, led to my having less and less interaction with the people around me Monday through Friday and, occasionally, Saturdays. Most of my friends outside of work had no problem being regaled with, and often laughing at, my tales of misadventure in the Marines. But nearly all of them were vets themselves or had known me from the days before I joined the service. So the majority of the week was a slog through endless hours of work with people who, however nice they were, really didn't have much to say to me. They couldn’t really joke around or relax with someone they couldn’t picture doing either of those things. So I started to get moody, bitter, and snappy. You know, what a lot of people expect of a veteran.

I needed an outlet, a way to let off a whole lot of steam. Not to mention I was long overdue, in my estimate, to get my writing career started in earnest. I wanted people to see the relatable, wacky, sarcastic side, of being a veteran. So, I hit upon the idea to write a pilot. After all, I am an all-around funny guy with screenwriting experience and a love of television. So, lo and behold, after that September weekend spent on my balcony with a MacBook and a highball class, I had written something sarcastic and slightly absurd, just like everything else I write, but it was also an honest glimpse into my life and the lives of my friends, with characters based on real veterans in the real world, not Michael Bay-esque super badasses or generic PTSD sob stories.

A lot's happened between that September weekend and where “Vetted” is now, and a lot more empty bottles of scotch have wound up in my recycling bin. With the help of my father and his business partner, both Emmy-winning producers working in advertising, I pitched the script. After getting lots of positive feedback and little else, we decided to film it. With the help of friends and family, an amazing cast and crew, and a sizeable contribution to our budget by a third, silent partner executive producer, — full disclosure, it was my mom — we did just that. The response from our aforementioned premiere was universally positive. Some who saw it then are now helping us with the long, frustrating process of trying to sell “Vetted” to a network, and others have put out positive reviews or pledged their support.

Having let the slow wheels of the entertainment industry grind on for the spring, I decided to try and fund a second episode. After all, it may be a long time — if ever, if I may be depressingly realistic for a second — before “Vetted” gets picked up, and I have a lot more I want to write about us veterans and how funny we can be. So, we have a Kickstarter for a second episode, now with almost half of our $25,000 goal reached and a few weeks to go. I've stepped up the show's social media presence, such as it is, and have begun to learn what this Twitter is that all the kids are using. I've divided the pilot into segments to release online every two weeks for the duration of our funding period. Three have already gone up on our YouTube channel, with the fourth and final segment to debut Aug. 12. It's no three-season contract with a major network, but I'm happy that people are watching my funny, sarcastic glimpse into the lighter side of life after active duty. The opportunity to put even just one more episode out would hopefully give me the chance to show even more people how funny veterans and their stories can be.

The road to getting a show on television is often a long and difficult one, and “Vetted,” having only gone up on a screen for the first time five short months ago, probably has a long way to go for that slim shot at making it big. But maybe someday we’ll get the chance to continue what I started: Showing the funny side, and even the darker side with a coating of comedy, of being a veteran.