An Unexploded WWII Bomb Forced 54,000 Germans From Their Homes On Christmas Morning

More than 54,000 residents of Augsburg, Germany, had to evacuate their homes on Christmas morning, after a massive aerial bomb... 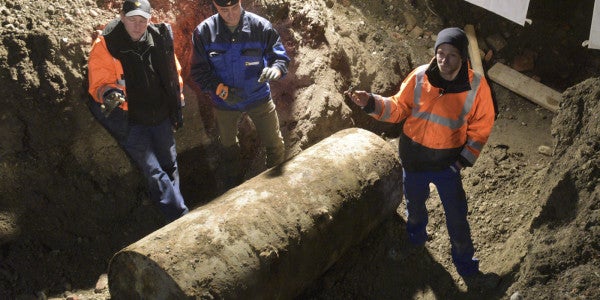 More than 54,000 residents of Augsburg, Germany, had to evacuate their homes on Christmas morning, after a massive aerial bomb from World War II was discovered earlier in the week during construction. It was Germany’s biggest evacuation since World War II, according to German broadcaster Deutsche Welle.

54,000 people in Augsburg, Germany, ordered to leave home on Christmas morning as officials prepare to defuse a 1.8-ton bomb from WWII pic.twitter.com/HHqbAzyPWv

“Today I ask everyone concerned to leave the area, if possible by themselves,” said Augsburg mayor Kurt Gribi on the city's Twitter account Sunday morning.

It took authorities most of the day to defuse the bomb, which weighed nearly 4,000 pounds. Bomb experts had to clean off 70 years of muck in order to disable its three detonators, according to the Associated Press. At 1.8 tons, it was thought to be a “so-called blockbuster of the type dropped by British forces, with the aim of blowing surrounding buildings apart so that accompanying incendiary bombs could start fires more easily.”

Many school and public buildings were opened as shelters for those with nowhere else to go.

“The atmosphere in the city is spooky. No man on the streets, no face behind the windowpanes,” a city spokesperson wrote on a dedicated website, according to UPI.

Police intentionally defused the bomb on Christmas day since there was less traffic and people in the blast zone could more likely leave to stay with family and friends. By 7 p.m. local time, residents were given the all clear to return to their homes.

It is not uncommon for unexploded bombs to be found in cities around Germany, but they have led to casualties if not defused.

In December 2011, approximately 45,000 residents of Koblenz, a town in western Germany, had to evacuate so two unexploded bombs found in a riverbed could be defused.