Soon, Riflemen Won’t Need To Aim — This Tech Will Do It For Them

If you’ve ever experienced the frustration and embarrassment of missing what should have been a guaranteed kill shot, rejoice: the... 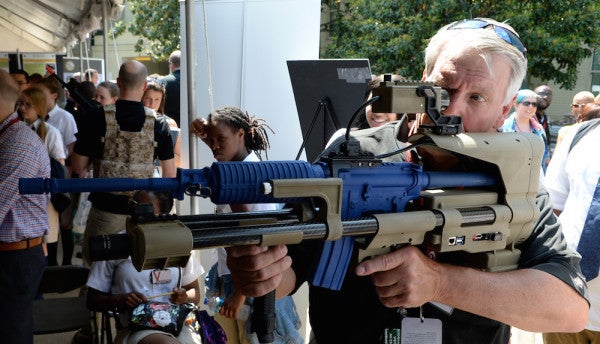 If you’ve ever experienced the frustration and embarrassment of missing what should have been a guaranteed kill shot, rejoice: the U.S. Army may soon take aiming out of the equation altogether.

During Pentagon Lab Day on May 18, the Department of Defense, showed off an engineering model for a new rifle system, through a series of sensors and motors, automatically centered a standard-issue M4 on a target, effectively eliminating the hard work of zeroing in on an enemy.

Yes, you read that right: this rifle aims itself.

“When you want to hit a target, you have to take into account the weapon, the ammo, the environments, and the shooter,” Terence Rice, a researcher with the Armament Research Development and Engineering Center (ARDEC) at Picatinny Arsenal, New Jersey, told reporter . “Given the fact that we're using sensors, computers and hardware … we can engage targets faster now.”

In the demonstration video, Rice showed off how a tactical computer mounted outside of a weapon could keep a lock on the target, even in the most turbulent situations. According to the press release, the platform “moved back and forth as if on hydraulics.” All the shooter had to do is pull the trigger.

Rice hopes the new technology will make soldiers into excellent marksmen without requiring them to actually have good aim.

“We're trying to attack the problem of aim error,” Rice said. “What this concept does is reduce aim error and engage targets quicker.”

While the advanced targeting system is currently in the prototype stage, the Army is interested in applying this concept to crew-served systems, like tanks, ships, and aircraft. But Rice believes individual use will follow soon after.

“There is a foundational technology with software that's similar, no matter what system,” Rice said. “It doesn't make any difference what caliber weapon either. It could be 5.56, 7.62, or .50-cal.”

While the technology is fascinating, it also poses a complicated question for combat troops: will marksmanship training even be necessary in the future? And could the technology eliminate the need for snipers altogether? Legendary Marine Corps Gunnery Sgt. Carlos Hathcock II, who established a Scout Sniper School at Quantico, Virginia, after returning home from the Vietnam War, probably wouldn’t approve.

But not everyone can be a Hathcock, and if Rice gets his way, you’ll be lethal as hell no matter what rifle you use — or how much you suck as a marksman.