Worried about China’s air force? Here’s everything you need to know

“They don’t have to be as good as the world’s best stealth aircraft, they just have to have one that keeps the U.S. at bay.” 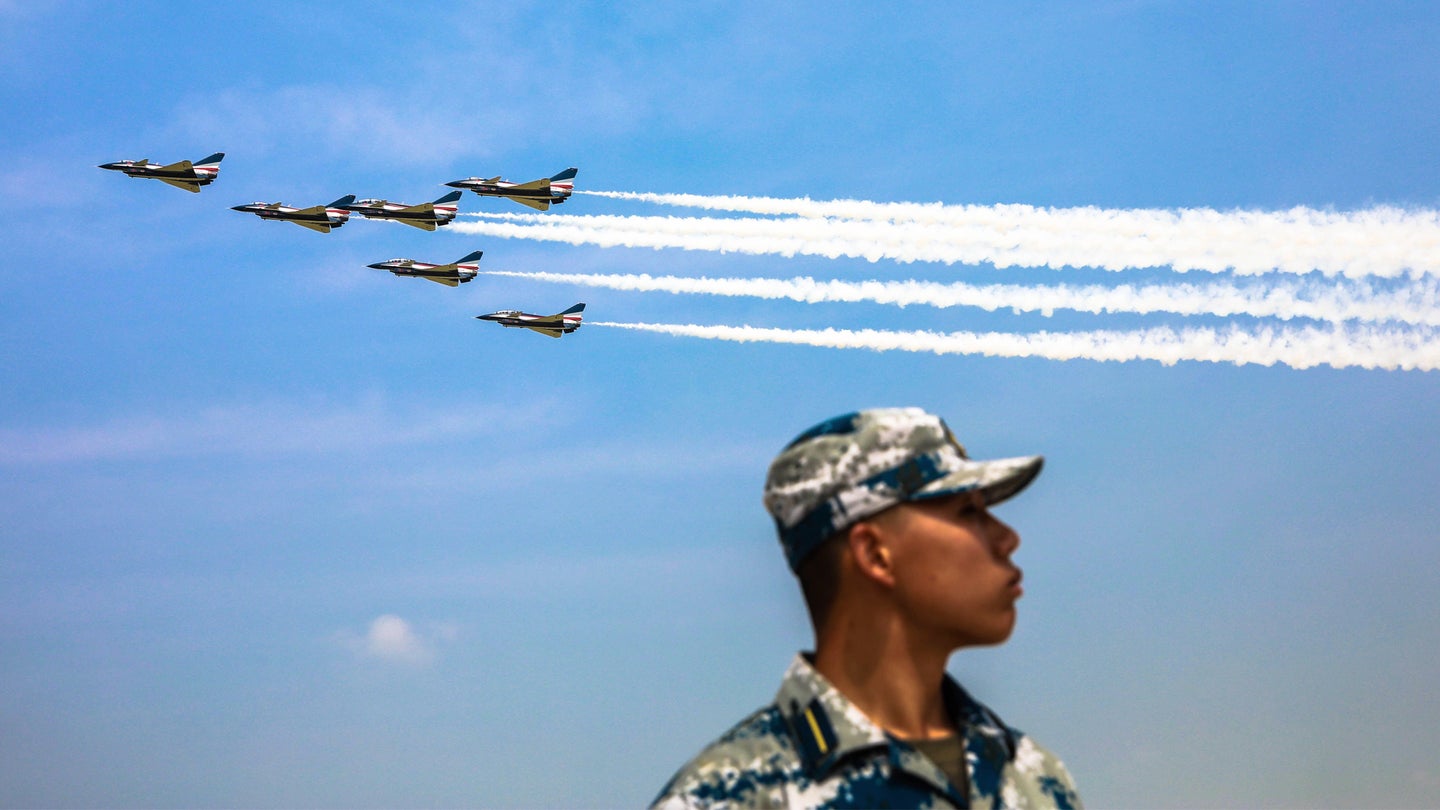 Ask anyone in the U.S. military above the rank of colonel what keeps them awake at night and they will likely say “China,” the rising superpower across the Pacific. But what exactly are senior leaders afraid of, particularly in regards to the Chinese People’s Liberation Army Air Force (PLAAF)?

For years, U.S. Air Force leaders have sounded the alarm about China’s increasing power and America’s shrinking technological edge. But what are the specific forms of power and technology that have U.S. officials so worried? Considering the language barrier, cultural differences and the lack of transparent governance or a free press, it is difficult for average Americans to know what threats service members may face in a possible conflict in the western Pacific.

But not to worry, the Air Force prepared several easy-to-read briefings and videos to bring you up to speed. Though some of the videos date to late 2021 or early 2022, their general observations still hold up.

“[W]e must accelerate learning across the Air Force to stay ahead of the pace,” said Air Force Chief of Staff Gen. Charles ‘CQ’ Brown Jr. in a memo published on Thursday, alongside a series of “toolkits” put together by the Air Force’s China Aerospace Studies Institute (CASI).

Complete with briefs on China’s air force, rocket force, cyber capabilities, naval aviation and space forces, the “toolkits” are meant to break down what air and space capabilities China could bring to bear in a conflict. There is also a separate list of videos, briefings and podcast episodes on subjects like China’s history with Taiwan and why that relationship is so important today. As G.I. Joe once said, “knowing is half the battle,” and Gen. Brown seeks to make that half as easy as possible.

“This toolkit is intended to assist you, our Air Force leaders, in educating the entire force on this challenge,” the general wrote.

Below is a reader’s digest version of a few of the materials about China and the PLAAF, with plenty of links to CASI so that you can learn more from the institute’s scholarship.

A key goal of the PLAAF and its parent organization, the People’s Liberation Army, seems to be deterring U.S. intervention. As Brendan Mulvaney, the director of CASI, put it in one video, the PLA wants to be a world-class military by 2049, but for now it is currently focused on being “good enough.”

“They don’t have to be as good as the world’s best stealth aircraft, they just have to have one that keeps the U.S. at bay or gives American planners pause,” Mulvaney explained. “They’re building air-to-air missiles that outfly those of the United States so they don’t need to go toe-to-toe with U.S. airpower. They adapted ballistic missiles to shoot at naval forces so the PLA Navy doesn’t need to engage directly in surface warfare.”

Still, the Chinese Communist Party has global ambitions and is building the “tools and platforms” to achieve it, Mulvaney said. A good example of that is a series of lines of control — imaginary lines running north to south across the Pacific.

The first line of control is the coastline of mainland China, the director said in a video about the PLAAF. Within this line, the PLAAF aims to have “total air control and air situational awareness,” Mulvaney said, meaning it knows exactly what is flying over that strip of ocean and can destroy anything it does not like. The PLAAF plans to control that zone with a network of air defenses and air bases.

The next line of control is an area that runs from China’s coast to an imaginary line that stretches from the southern tip of Japan, runs south close to Malaysia, then hooks west to encircle the South China Sea. This line is known as the first island chain, and the PLAAF hopes to exercise some control over the region based on the range of China’s ground-based air defenses, Mulvaney explained.

The PLAAF may have near-total control over some areas like the Bohai Sea, near northwest China, or around some parts of Taiwan, but not much outside the range of its ground-based air defenses, some of which can reach 250 kilometers. The PLAAF could project airpower in the form of fighter patrols beyond those ranges, but without a robust aerial refueling tanker fleet, that patrol system would not be sustainable, Mulvaney said.

The PLAAF has limited goals in the third line of control, which runs out to the second island chain: an imaginary line that includes Guam, which hosts a major U.S. military presence in the form of Andersen Air Base. In that zone, PLAAF wants to be able to carry out “limited strikes,” and “limited deterrence,” which likely implies being able to reach out with long-range bombers and hit targets like Andersen with a nuclear weapon.

A “commander’s toolkit” on the PLAAF prepared by CASI puts things more bluntly, stating that “The PLAAF’s primary mission is a Taiwan invasion.” However, the PLAAF and its sister services are also expected to prevent the U.S. Air Force from approaching Chin–and, by extension, Taiwan–by striking U.S. air bases, the U.S. Air Force refueling tanker fleet, and its airborne warning and control systems (AWACs). The next section breaks down why it’s the not-so-sexy aircraft–the tankers, airborne early warning and control aircraft, and electronic warfare aircraft–which really allow an air force to project power far from home. That is why China is so keen on shooting down America’s and developing their own.

Like the U.S. Air Force, the PLAAF uses fighters, bombers, transports and other specialty aircraft to achieve its missions. The PLAAF also has a mix of old and new aircraft. The PLAAF has non-stealth fourth-generation fighters such as the J-11, which specializes in taking down other aircraft, and the J-10 and J-16, which are multirole fighters that can strike targets on the ground and dogfight in the air. The PLAAF flies at least 200 stealthy, fifth-generation J-20 fighter, according to Defense News, compared to the U.S. fifth-generation fleet of about 180 F-22 Raptors and about 450 F-35s.

Like in the U.S. Air Force, the PLAAF has been updating its older fighters with better sensors and weapons over the years, and some of the more effective weapons are the PL-10 and PL-15 air-to-air missiles, which outrange the American AIM-9X and AIM-120 AAMRAM missiles. There’s also the PL-17, an even-longer range radar-guided air-to-air missile that CASI says is “intended to shoot down tankers and AWACs to limit the USAF’s ability to project power.”

Tankers are crucial to air operations in places like the vast Pacific Ocean, where places to land and refuel are few and far between. Fighter jets are relatively short-ranged without tankers, which are largely helpless against enemy fighters. The PLAAF has about 30 tankers as of early 2022, while the U.S. Air Force has about 396 aging KC-135 Stratotankers and hopes to buy 179 KC-46 Pegasus tankers within the next few years. But China’s tanker count is expected to grow in the future, CASI warned.

Keeping aircraft fueled is just one element of sustaining long-range air operations. Another important element is seeing what is around the corner. The U.S. military has a fleet of E-3 Sentry, E-2 Hawkeye, and, in the next few years, E-7 Wedgetail jets for detecting enemy aircraft and coordinating friendly forces. CASI explained that the PLAAF historically has used ground based radar “for both early warning and directing aircraft to targets,” but is now investing in airborne warning and control platforms such as the KJ-500.

The long-range capabilities of refueling, early warning and control could help coordinate long-range PLAAF strikes over places like Guam, particularly as China looks to upgrade its bomber fleet. The PLAAF operates H-6 bombers that can fire long-range cruise missiles and carry nuclear weapons. Though the H-6’s “limited range hampers its ability to carry out credible deterrence operations,” it could help PLAAF develop modern nuclear bomber techniques that could make PLAAF a genuine long-range nuclear threat in the future, CASI wrote.

Not all dangerous weapons explode, and the PLAAF fields GX-11 standoff jammer aircraft that can disrupt enemy communications and radar from a distance. The service is also procuring J-16D escort jammers: electronic attack jets similar to the Navy’s EA-18G Growler jets.

But an air force is more than just dropping bombs and firing missiles: it is also about helping the rest of the military get around. The U.S. Air Force has a fleet of C-17 and C-5 transport jets for heavy lifting and C-130s for smaller jobs, and the PLAAF is working on a similar capability by building up its fleet of Y-20s, which looks similar to the C-17.

Right now the PLAAF can move just two light airborne brigades or one light mechanized airborne brigade “if it uses its entire inventory of transportation aircraft, leaving limited extra capacity for emergency transport of materiel or other tasks,” CASI wrote. By comparison, the U.S. Air Force moved 124,000 Afghan evacuees in just a few weeks during Operation Allies Refuge in 2021 and still had plenty of transport aircraft to spare. While that may sound like a stark difference, remember that for now the PLAAF is not aiming to be a world-beating colossus, but instead to be “good enough” to deter U.S. intervention in the western Pacific.

“Given this relative weakness, the PLAAF is seeking to expand this fleet to provide it with more options for rapid logistics support for aviation units or to provide other cargo transportation services without putting the lift it needs for a Taiwan invasion scenario at risk,” CASI wrote.

This brief guide leaves out a lot, like the PLAAF’s growing fleet of unmanned or autonomous aircraft; the airfields the PLA is building on artificial islands in the South China Sea; and a large number of other aircraft and capabilities that would make any American or allied airmen worried. But hopefully this will provide a first taste and an entry to other conversations about Chinese airpower.

While the PLAAF may not have the U.S. Air Force’s depth or breadth now, the Chinese Communist Party probably aims to grow towards it in the future. Until then, it still has plenty of punch.

“The PLAAF is now an extremely robust Air Force that can conduct sustained precision strike missions beyond the first island chain while also defending [Chinese] territorial airspace against even a robust adversary like the United States,” Mulvaney said.

However, becoming a global superpower requires making a few friends, and Mulvaney said this is an area where China falls short. Allies and partners “are our backbone across the Indo-Pacific,” he said. If the U.S. can sustain partnerships with countries like Japan, South Korea and the Philippines, it could help the U.S. Air Force multiply its strengths in comparison to the PLAAF.

“More importantly, they represent something the U.S. has many of, and China has none of,” Mulvaney said. “Allies.”