Watch an Australian C-17 weave between skyscrapers in ‘insane’ video

"If the crew's timing is off or if they are slow to react, the jet would collide with a building." 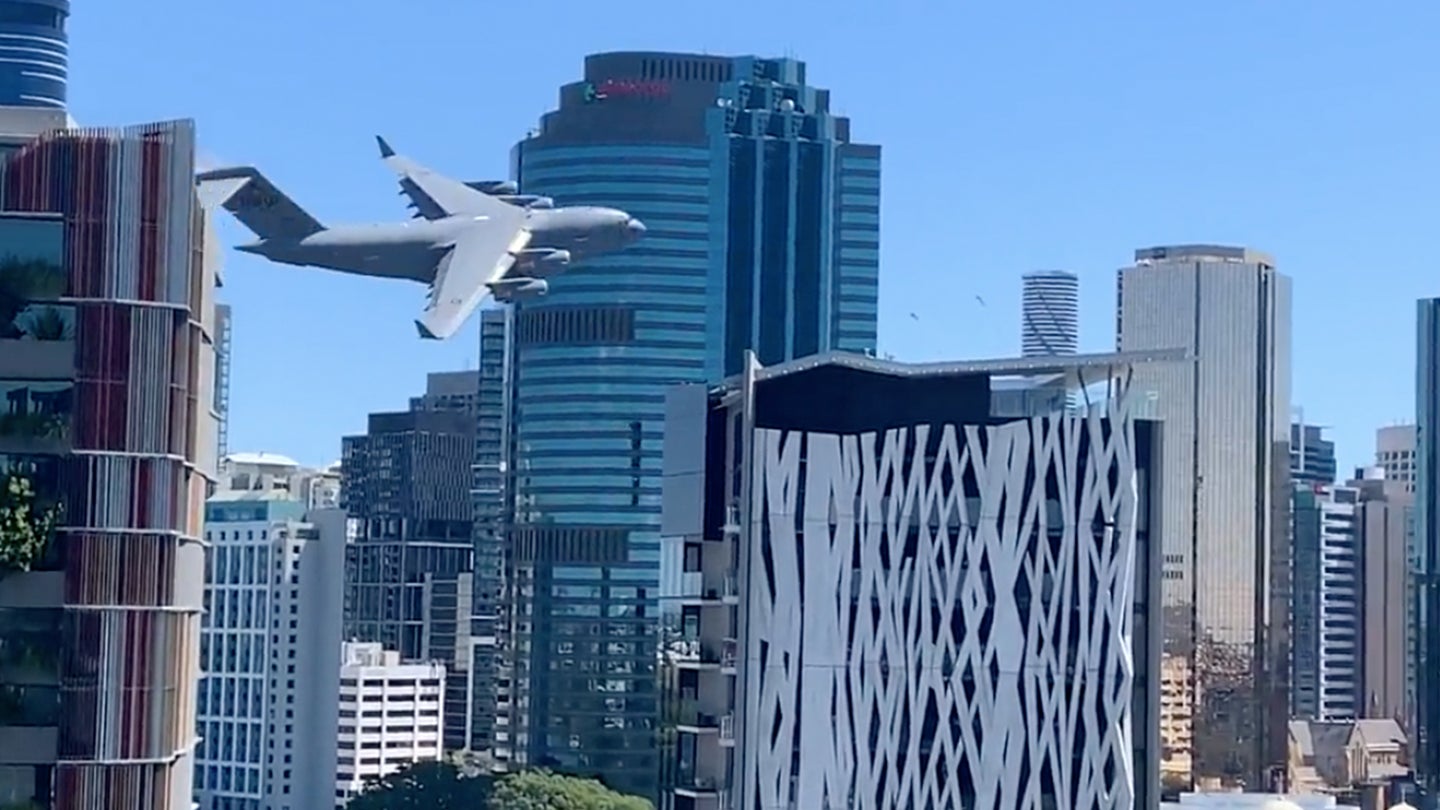 An RAAF C-17 Globemaster III rehearses a flyby through the skyline of Brisbane Australia on Sept. 23, 2021 in preparation for a demonstration in the Sunsuper Riverfire festival. (Screenshot via Reddit / CommanderDinosaur).
SHARE

Big, slow and bulky, the C-17 Globemaster III cargo jet may not be the first aircraft that comes to mind for pulling off insane aerial stunts, but that didn’t stop a crew of Royal Australian Air Force aviators from doing it anyway.

In a video posted to the unofficial U.S. Air Force subreddit on Thursday, you can watch as an RAAF C-17 zooms between skyscrapers in Brisbane, Australia, while some enthusiastic onlookers drop some very colorful commentary behind the camera. The fly-by, which happens regularly as part of the annual Sunsuper Riverfire festival, was a practice run ahead of the formal event scheduled to take place on Saturday, according to a RAAF press release.

The C-17 flyby has taken place at each festival since 2017, according to The Aviationist, and every year a round of videos of the wild stunt make their way onto the interwebs, where they amaze and impress viewers near and far.

But as cool as the stunt looks, it is also incredibly dangerous, one U.S. Air Force C-17 pilot told Task & Purpose.

“If the crew’s timing is off or if they are slow to react, the jet would collide with a building. Very risky,” said the pilot, who spoke anonymously as he was not authorized to speak with the press.

For that reason, U.S. C-17 pilots must fly 1,000 feet above structures in populated areas, he explained. There is a special approval process for doing flyovers for sporting events, but even then, they cannot fly below the tops of buildings.

“Those Brisbane videos are insane,” the pilot said. “We could never do something like that in the USAF. If we did, we would lose our wings immediately — never fly again.”

American C-17 pilots do practice low-level flights in canyons at 300 feet above ground level, but canyons are not filled with people the way skyscrapers are. Still, the pilot could not help but acknowledge that the Australian stunt, as insane as it is, is also a little “badass” too.

The C-17 is not the only aircraft to have flown over Riverfire. According to the RAAF, Australian Army helicopters will also fly along the Brisbane river in preparation for Saturday’s show. In the past, the festival has also featured RAAF F/A-18 Hornet and EA-18G Growler fighter jets and the Roulettes Acrobatics team, The Aviationist reported.

It appears the Aussies are no strangers to potentially risky — albeit impressive — aerial stunts. Several times in front of audiences, RAAF F-111 Aardvark attack planes performed a “dump-and-burn,” a maneuver where fuel is dumped out of the back of the aircraft and ignited by its afterburner, causing a spectacular plume of flame.

Still, just because they don’t fly below buildings doesn’t mean American pilots don’t take risks. For example, in August, one U.S. C-17 crew flying refugees out of Afghanistan had to take off on a runway full of people trying to get onboard, with an unknown number of refugees (which turned out to be a record-breaking 823) crammed in the back and surrounded by a mountain range. Affectionately known as the “Moose” the C-17 and its crews continued to evacuate people out of Afghanistan until the end of America’s involvement there on August 31, despite the risk of enemy fire and the growing wear and tear on the aircraft.

“When I look back on why I chose the C-17 in pilot training, it’s this defining moment that comes once in a generation that makes the long stretches of being tired, of being stretched to the limits worth it,” one pilot told Task & Purpose at the time.

In a way, the Australian stunt is a nice coda to a summer of the C-17 being in the spotlight. Even when it’s not flying missions, the Moose, as Thursday’s video shows, puts on a pretty damn good show.