Behold the glory of the helmet gun

The VA still wouldn't find your TBI to be service connected. 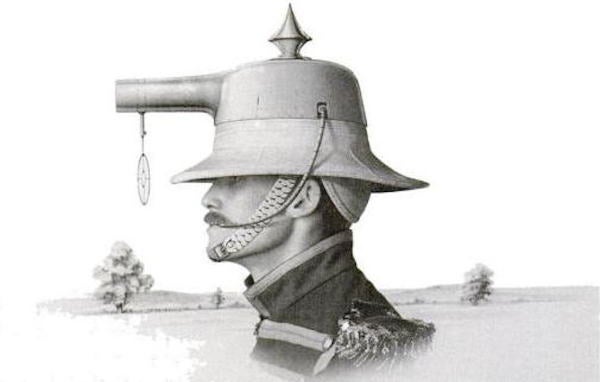 The result, patented in 1916, was the so-called “gun helmet,” the very first integrated weapon helmet system that included a firearm “adapted to be mounted on and fired from the head of the marksman” by blowing through a tube, as Pratt wrote at the time.

“The weapon described has many advantages,” Pratt wrote in his patent application. “The gun is automatically aimed unconsciously and incidentally to the turning of the head of the marksman in the direction of the target. In self-protection, one immediately, instinctively turns the head in the direction of attack to see the enemy, or, in hunting, toward any sound made by nearby game. Thus the gun is automatically directed toward the mark in the course of the first instinctive movement.”

Pratt even claimed that his helmet solved the obvious issues of recoil, so far that “the strong spring back of the breech-bolt forces the same so quickly forward again following the recoil, that the two movements naturalize one another so promptly that no discomfort to the wearer results from the recoil.”

Here’s a look at the inner workings of this ridiculous thing Pratt’s patent:

Unfortunately, no records exist to indicate whether this weapon system ever actually saw combat when the U.S. eventually entered WWI; indeed, it represents a major departure from the standard-issue steel ‘Brodie helmet’ fielded as the M1917 at the time.

But while the gun helmet may seem ridiculous, it was actually a concept decades ahead of its time. The modern U.S. military has experimented with slaving sensors and weapons systems to an aviator’s head movements since the development of Integrated Helmet and Display Sighting System (IHADSS) for the AH-64 Apache helicopter in the 1980s.

Here’s to you, Pratt: Your gun helmet may have never caught on, but it’s certainly cool as all hell.

Related: 6 freaky weapons that came out of the Civil War