The USS Dwight D. Eisenhower returned home to Norfolk Sunday following a seven-month deployment that included breaking the Navy’s record for most days at sea 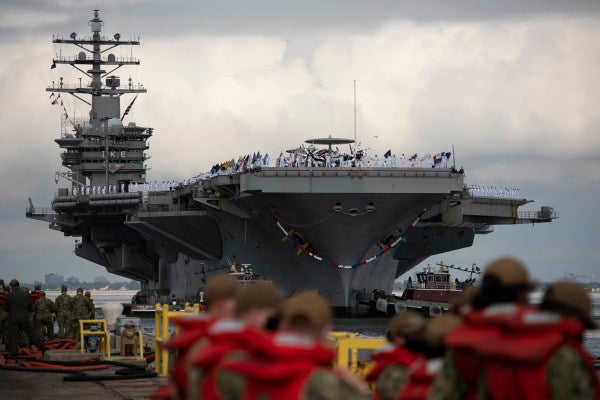 The USS Dwight D. Eisenhower returned home to Norfolk Sunday following a seven-month deployment that included breaking the Navy’s record for most days at sea.

The novel coronavirus (COVID-19) made stops in foreign countries too risky, officials said, so the aircraft carrier had to keep moving.

The Eisenhower’s strike group includes about 6,000 total sailors. There are five ships in addition to the carrier. The guided-missile cruiser San Jacinto sailed into Naval Station Norfolk Sunday as well. Cruiser Vella Gulf and guided-missile destroyers Truxtun and and James E. Williams are expected Monday. The Stout, another destroyer, remains deployed.

The strike group had left in late January for a final certification exercise and went straight from there to its deployment, instead of coming home first as is customary. That was part of a Defense Department strategy known as “dynamic force deployment,” which is meant to keep adversaries on their toes, The Virginian-Pilot reported at the time.

Since then, sailors have operated in the 5th and 6th fleets — the Middle East and Europe, respectively. Each ship sailed more than 60,000 nautical miles, the Navy said in a news release. They partnered with the USS Harry S. Truman and French carrier Charles de Gaulle for dual carrier operations.

A few months ago, the USS Eisenhower got Naval History and Heritage Command to recognize its crew with a new title, “Iron Shellbacks.” That was for their crossing of the equator line in May following over 100 days at sea without port stops.

The ship, along with the San Jacinto, eventually broke the Navy’s record of 160 consecutive days at sea. The Ike ended up at 206.

Eisenhower’s Capt. Kyle Higgins said at the time the milestone was “not one that I think we really wanted but one that the circumstances of the world thrust upon us. And we embraced it with style.”

Crew members also had to improvise to make more than 500 serious equipment and systems repairs that would normally happen at the depot level or with technical help coming on board.

During their deployment, the Vella Gulf, James E. Williams, Stout and Truxtun participated in Operation Sentinel, the Navy said, “providing freedom of navigation and the free flow of commerce in and out of the heavily transited Strait of Hormuz and Strait of Bab el Mandeb.”

“The professionalism of my aircrew and the sailors sweating through seven months of no port visit operations was simply eye-watering,” Capt. Trevor Estes, commander of the air wing, said in a statement. “I truly hope that every member of this team has the opportunity they deserve to relax and enjoy time with family and friends post deployment.”