The largest largest maritime military exercise in the world may have been scaled back this year due to the novel coronavirus (COVID-19), but that doesn't mean the U.S. Navy and its naval allies are skipping all of its critical war games 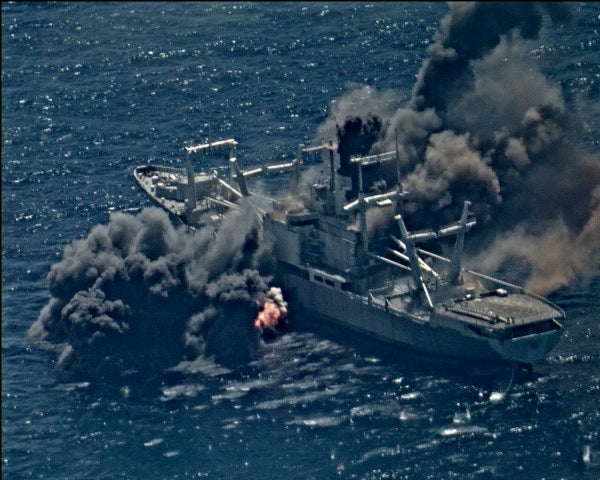 The largest maritime military exercise in the world may have been scaled back this year due to the novel coronavirus (COVID-19), but that doesn't mean the U.S. Navy and its naval allies are skipping all of its critical war games.

As part of the annual U.S.-led Rim of the Pacific exercise, the Navy sank the USS Durham, a decommissioned Charleston-class amphibious cargo ship.

Commissioned in May 1969 and named for Durham, North Carolina, the vessel served during the Gulf War before being pulled out of service in Feb. 1994.

According to our sharp-eyed friends at The War Zone, footage of the sinking showed a trio of anti-ship cruise missiles — likely RGM-84 Harpoons — skimming above the surface of the ocean before slamming into the port side of the Durham.

“Simulation is a critical part of our training but there is nothing better than to conduct live-fire training,” Royal Australian Navy Capt. Phillipa Hay, commander of RIMPAC 2020 Task Force One, said in a statement.

“Sinking exercises are an important way to test our weapons and weapons systems in the most realistic way possible. It demonstrates as a joint force we are capable of high-end warfare.”

Ten nations, 22 surface ships, one submarine, and approximately 5,300 personnel participated in RIMPAC between Aug. 17 to 31 in the waters surrounding Hawaii.

This year's RIMAPC is the 27th in a series of international maritime military exercises that, initiated in 1971, are “designed to foster and sustain cooperative relationships, critical to ensuring the safety of sea lanes and security in support of a free and open Indo-Pacific region,” according to the U.S. Navy's 3rd Fleet.

“The exercise is a unique training platform designed to enhance interoperability and strategic maritime partnerships,” it added.

The focus on “a free and open Indo-Pacific region” is a not-so-veiled message to China, which has increasingly sought to assert its sovereignty in the South China Sea in recent years.

Indeed, while China had previously joined RIMPAC starting in 2014, the country was disinvited in 2018 over its ongoing Indo-Pacific military buildup, according to Nikkei's Asia Review.

“Not only has Beijing clearly been excluded again this year, but RIMPAC 2020 itself seems to be a stage for the Pacific navies to simulate their China scenarios,” the Asia Review reports.

“In spite of COVID-19, the world has not stopped,” 3rd Fleet commander Vice Adm. Scott Conn said in a press conference earlier this month. “Nor have the demands for the free flow of commerce across the world's oceans. Our collective prosperity depends on this and we need to continue to safeguarding it.”