"There’s a reason why zero, exactly zero, airlines on the planet operate the 707." 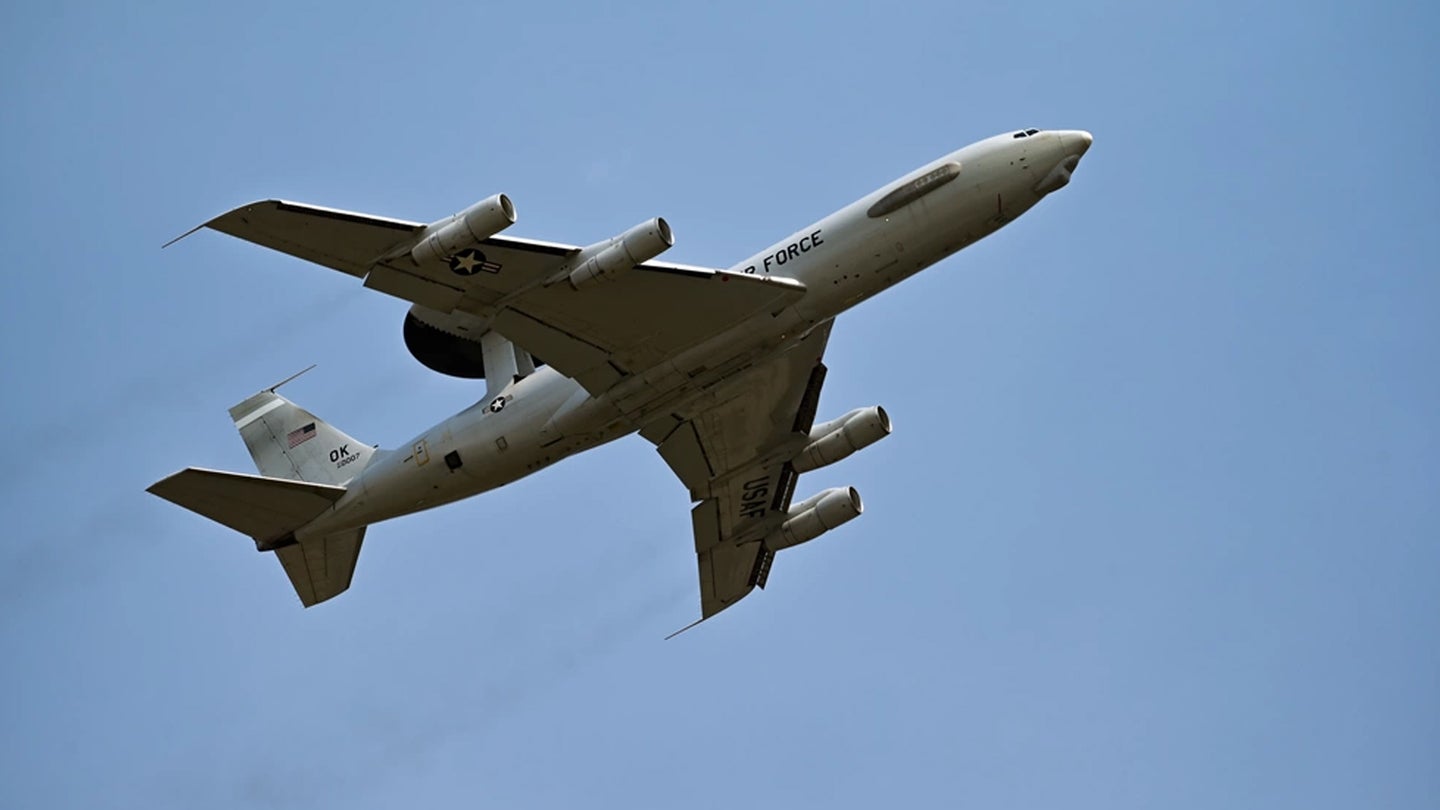 One of the U.S. Air Force’s most important aircraft is so old and difficult to maintain that civilian airliners no longer fly it, the head of Air Combat Command told reporters last week. The Boeing 707, the jet which serves as the base of the Air Force E-3 Airborne Warning and Control System (AWACS), last flew civilian passengers for a U.S. airliner in 1983, and flew its last civilian flight in general when one flown by Iran’s Saha Airlines crashed in 2019.

But despite its age, the 707 continues to provide the U.S. military with essential battle tracking information. Using the 30-foot-wide radar dome mounted to the top of its fuselage, the E-3 AWACS can track friendly and enemy aircraft and ships, and serve as an information hub for commanders operating on the ground as they work with aircraft overhead. In other words, if you’re a grunt on the ground and you need air support, there’s a good chance an AWACS will act like a police dispatcher and take your call before sending an A-10 Warthog loaded with kick-butt your way. But the aging E-3 needs a lot of tender loving care to stay airborne these days.

“There’s a reason why zero, exactly zero, airlines on the planet operate the 707,” Gen. Mark Kelly, the head of Air Combat Command, said on Wednesday at the Air Force Association’s Air, Space and Cyber Conference.

It’s because of the engines, Kelly explained. Specifically the “challenges of sustaining a 707 with TF33 engines.”

TF33 engines, like the 707 itself, are very old. The engine and the aircraft were first flown in 1959 and 1957, respectively, though the aircraft did not fly as an Air Force AWACS platform until 1975. The 707 was once “synonymous with the new jet age” and ushered in “the era of mass air-travel,” according to the BBC. But that time has gone, and now it takes a small miracle just to keep them aloft, Kelly said.

“It just really really takes miracle workers from airmen first class in the flightline to backshops in depot at Tinker [Air Force Base] to keep these airplanes in the air,” the general said.

Despite maintainers’ best efforts, the aircraft met none of its aircraft availability goals since 2011, according to a 2020 Government Accountability Office report. Part of the problem is that the aircraft is so old that manufacturers no longer make replacement parts for it, the GAO found.

“According to program officials, it is common for contractors not to want to restart production of parts for small quantities,” the report said. “Further, the program officials noted that the E-3 engine suffers from “cold” supply chains; specifically, no commercial vendors have made some parts for several years.”

Kelly echoed that problem at the conference last week.

“You realize ‘my parts supply, my supply chain, goes from wherever that pacing theater is, whether it’s Europe, Asia, the Pacific, back to either Tinker or the Davis-Monthan [Air Force Base] boneyard,’” the general said. “You’re doing that in contrast to a globe of 6,800 [Boeing] 737s” that have spare parts stored all over the world … You can send an airman to Frankfurt airport or any airport to get the piece you need.”

Of course, the E-3 is not the only over-the-hill aircraft in the U.S. Air Force. Another notable example is the B-52 Stratofortress bomber, the youngest of which still in service was built in 1962, according to Air Force Magazine. The Air Force plans on flying the B-52 into the 2050s, and it even just signed a $2.6 billion contract with Rolls-Royce to kit its 76-ship fleet out with brand new engines. The E-3 won’t be getting the same kind of love, but its replacement could be on the way.

Though the Boeing 737 made its first flight in 1967, new models of it continue to be built today, so the parts supply is much more robust and widespread than the 707. In the U.S. military, versions of the 737 are already used as transport aircraft by the Air Force and as a logistics aircraft in the Navy. But it could also replace the aging E-3 AWACS. In fact, the E-7A Wedgetail, a 737-based airborne early warning and control system, has already been flown by the Royal Australian Air Force for nearly 10 years, and the U.S. may buy a few for its own use.

“The air domain awareness we get out of a capability like the E-7 frankly makes our fifth generation [fighters] more lethal and keeps our fourth generation more relevant longer,” Kelly said last week.

He’s not the only Air Force commander singing the E-7’s praises. Earlier this year, Gen. Kenneth Wilsbach, the head of Pacific Air Forces, advocated for rapidly procuring the Wedgetail to help the U.S. stay dominant in the region, according to The War Zone. Besides being younger and better-supplied with spare parts, the E-7 is also smaller, more fuel-efficient and carries more advanced radar than that of the E-3.

“[I’m] very focused on the E-7 capability,” Kelly said on Wednesday, and his boss, Air Force Chief of Staff Gen. Charles “CQ” Brown, seems to be listening. Brown said his service is doing an “internal analysis” of the E-7 and that he is in touch with officials with the Australian and British Air Forces about the aircraft, according to Breaking Defense.

However, even if the U.S. Air Force does acquire a few Wedgetails, it may be just a gap-filling measure as the branch transitions to space-based moving target tracking systems.

In May, Gen. John “Jay” Raymond, the head of the Space Force, revealed a plan to develop radar satellites that can track moving ground targets and allow for much greater range than air-based systems, Breaking Defense reported at the time. Though the system proposed by Raymond at the time would be limited to tracking targets on the ground, Brown said last week that it could also track moving air targets, Braking Defense said.

The space-based system still has some working-out to do, and it’s not clear when we might hear about an official plan to buy E-7s. But it does seem like the E-3s days on the flightline — at least on Air Force bases — are numbered.