“We were sitting there in the cockpit, writing Tom Clancy novels in our heads about what would happen if we had to go down." 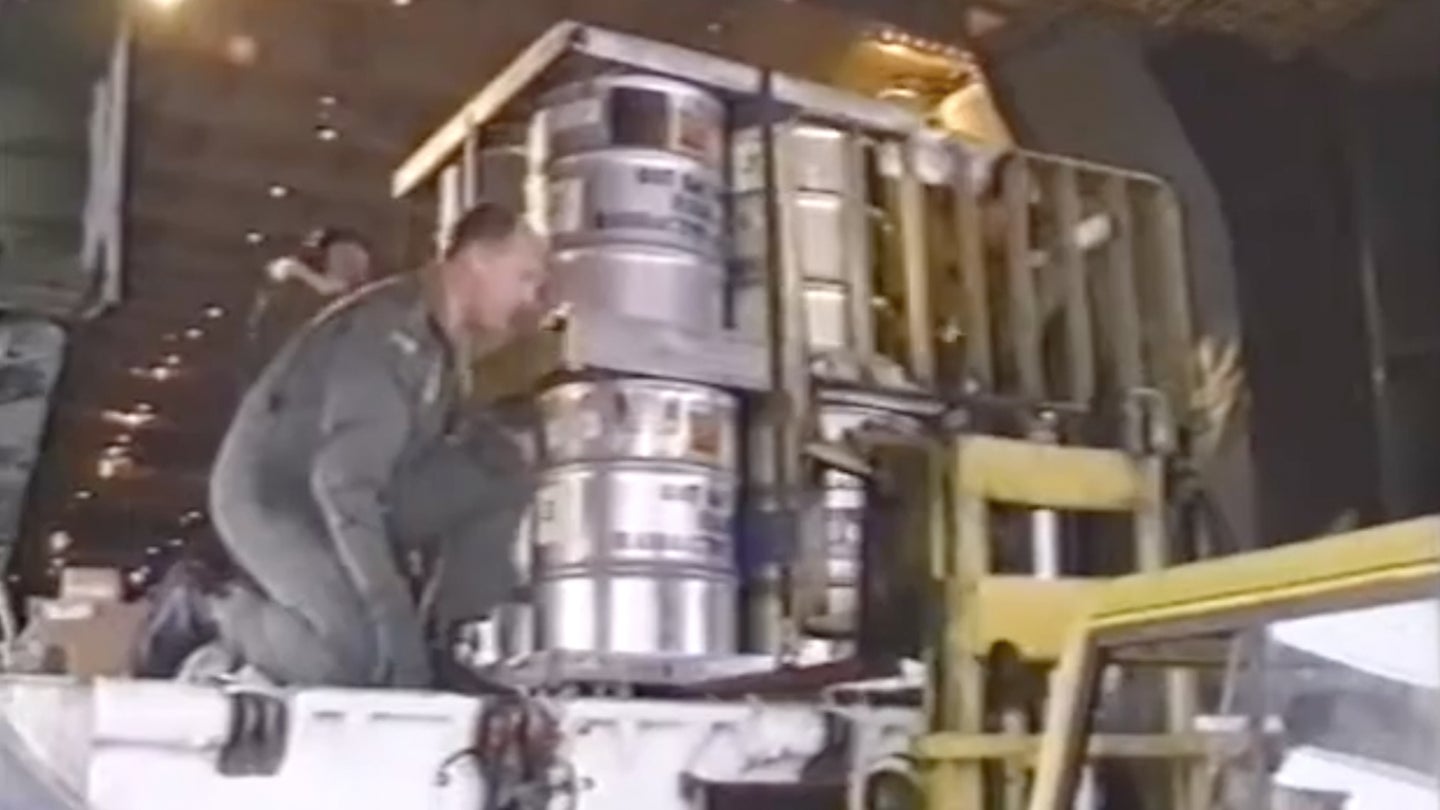 It sounds like the trailer for a James Bond movie: an unguarded stockpile of weapons-grade uranium; a white-knuckle convoy on black ice; enormous military jets; and custom trucks described as “a veritable funhouse of violent tricks,” according to former Defense Secretary Ash Carter.

But the people who planned and carried out Project Sapphire — the secret U.S. operation to move 20 nuclear bombs’ worth of highly-enriched uranium out of Kazakhstan in late 1994 — were not tuxedo-wearing spies sipping martinis. Instead, they were a few dozen diplomats, technicians, U.S. Air Force aviators and Kazakh partners who achieved through diplomacy what even Agent 007 would probably have a difficult time doing through force and parkour.

“Above all, what made this unique and sensitive operation possible was the fundamental trust between the governments of Kazakhstan and the United States,” wrote security researcher Togzhan Kassenova in a recent article about Project Sapphire for War on The Rocks. “With only a couple of years’ worth of diplomatic relations, the two countries dealt with serious political, technical, security, and logistical challenges.”

The mission also stands out now, when the U.S. and its allies are trying to work together to get weapons into Ukraine, a former satellite state of the Soviet Union, as it fights against a Russian invasion. The situation was the exact opposite in the early 1990s, shortly after the collapse of the Soviet Union, when American diplomats were told by their Kazakh partners that they had a dangerous amount of highly-enriched uranium sitting practically unguarded at an old Soviet facility.

Located in eastern Kazakhstan, the Ulba Metallurgical Plant was once “the flagship of the Soviet nuclear industry,” and supplied nearly half the fuel pellets used in Soviet nuclear reactors, Kassenova wrote. But by 1993, the plant’s main customer, the Soviet Union, had collapsed, and the newly-independent Kazakhstan wanted to join the international Non-Proliferation Treaty, which would mean handing over its weapons-grade uranium. But it would have to get rid of that stash fast before word got out and other countries, terrorist groups or even criminal organizations tried to nab the poorly-guarded stockpile.

“Against this complex backdrop, the Kazakh government came up with a plan to offer its highly enriched uranium to a safe buyer — the United States,” Kassenova wrote.

Secrecy was paramount, so the plant director, Vitalii Mette, met discreetly with U.S. embassy official Andy Weber in an office owned by a hunting equipment company in late 1993, but did not share exactly how enriched the uranium was. Months later, Mette’s messenger handed Weber a note saying “U235, 90 percent, 600 kilos.”

If you’re wondering what enriched uranium means, have no fear. In its raw form, uranium ore is 99.3% U-238, a type of uranium that is not fissile, meaning it cannot start or sustain a nuclear reaction, according to Smithsonian Magazine. However, 0.7% of the ore consists of U-235, which is fissile and can start and sustain a nuclear reaction. The thing is, that concentration of U-235 is too low for humans to start a reaction with. Power plants require a concentration of 3-4% U-235, while nuclear bombs require a much higher concentration: 90% U-235.

“Uranium enrichment, then, is the process by which a sample of uranium has its proportion of U-235 increased,” through centrifugation, gaseous diffusion or emerging techniques involving lasers, the Smithsonian wrote.

Enriching samples of U-238 with U-235 is an expensive, difficult process that not many nations are capable of. So when nearly half a ton’s worth was left virtually unguarded in eastern Kazakhstan, it meant “alarm bells rang full-force in Washington,” Kassenova wrote.

In October 1994 the U.S. sent a 31-person team made up largely of civilian contractors to pick up the heavy metal. They flew aboard Air Force C-5 Galaxy transport jets, the largest aircraft in the U.S. military and one of the largest planes in the world. The flight commander, Lt. Col. Mike Foster, of the 9th Airlift Squadron at Dover Air Force Base, Delaware, had plenty of questions for how it would go down.

“If there were ice, Foster wondered, would the runway be long enough?” wrote Air Force Magazine in a 1995 article about the mission. “Would there be adequate deicing equipment at the field? How would they get permission to fly through the airspace of other countries?”

Keep in mind that this sort of thing had never been done before: the U.S. had never removed large quantities of weapons-grade material “produced by its former archenemy, the Soviet Union, from a newly independent country,” wrote Kassenova.

That was part of the reason why the team of just 31 people needed three enormous C-5s. The team brought enough stuff and people to be fully self-sufficient, including an Air Force Security Police detachment, heaters, generators, MREs, a collapsible facility “the size of a three-car garage” for processing the enriched uranium, ovens to bake it in, and 1,400 containers to hold the uranium, according to Air Force Magazine. The flight took off from Dover on October 8, with Foster in the lead. Half-a-world later, he found that the 8,000-foot runway in Kazakhstan was “like a bucking bronco,” but it did the job.

After unloading the equipment and passengers, the C-5s flew for home the next day, leaving the contractors to do their job. It was complicated work: the uranium was still in a corrosive ‘wet’ form, according to Air Force Magazine. To move it, the contractors would have to remove the uranium from the containers it was found in, then bake and dry it to remove the water and oils there. Next, the metal would be placed in special metal containers about the size of a spray-paint can before being stacked in canisters about the size of a 55-gallon drum before being loaded onto a plane bound for home. Luckily, human skin can block uranium’s radioactive particles, making it not as dangerous as other radioactive elements according to the Centers for Disease Control and Prevention. Still, the technicians handling the substance wore gloves and respirators, and as long as the substance was in Kazakhstan, there was a chance it could be stolen by dangerous groups.

Over the course of the next four weeks, the team worked 12-hour days six days a week to process the uranium. They were good at their jobs, but not so good at discretion.

Operational security “was a grave concern,” wrote one military after-action report. Despite being experts in uranium, Department of Energy “failed to grasp the gravity of their situation,” and passed along classified information both in unsecured personal calls home and in earshot of strangers in the hotel lobby. On top of that, one of the civilians “was a borderline diabetic,” while another “suffered from chronic low blood sugar” that only grew worse with “the less than judicious application of alcohol,” which led to him nearly choking on his own vomit, the report read.

“Fortunately, during this one known incident, he did not suffocate,” the report continued.

Despite these challenges, the team emerged victorious, and after four weeks the 600 kilograms of uranium was ready to head west. The stuff was driven to the airport in the dead of night amid sleet, ice and rain.

“I just couldn’t imagine having to report to Washington that [one of the trucks with highly enriched uranium] slid right off into the Irtysh river,” Weber, the U.S. embassy official, later said. “Thankfully, in that part of the world, people know how to drive. Even on black ice.”

The truck drivers pulled through, but the slick icy conditions on the roads also posed a challenge for the C-5s waiting on the runway. Luckily, the workers at Ust-Kamenogorsk airport whipped up a truck-mounted jet engine to literally blow off the ice and snow.

Loaded with half the uranium, the first plane took off without a problem. The next day, the rest of the uranium, the team and the equipment followed. All the flights flew nonstop to Dover, requiring three air-to-air refuelings and setting the record for the longest C-5 flights in history at the time, according to the after-action report.

“We were sitting there in the cockpit, writing Tom Clancy novels in our heads about what would happen if we had to go down,” Foster said.

When the jets landed at Dover, the uranium was loaded onto special trucks for the final drive to the Department of Energy’s Oak Ridge, Tennessee nuclear storage facility. In a 2000 book, secretaries of defense William Perry and Ash Carter described those trucks as “a veritable funhouse of violent tricks that immobilize, stun, or kill anyone who tries to hijack them or tamper with them,” Kassenova wrote.

As dangerous as the trucks were, they were much less dangerous than the prospect of 600 kilograms of weapons-grade uranium on the black market. And that was exactly what Project Sapphire stopped from happening. The mission put the material “forever out of the reach of . . . black marketeers, terrorists, or a new nuclear regime,” Perry said, according to Air Force Magazine.

“They have done a great deal to make the world safer from nuclear danger,” he added.