"I had some great memories, but most of them involved getting off the aircraft and sprinting away from you.” 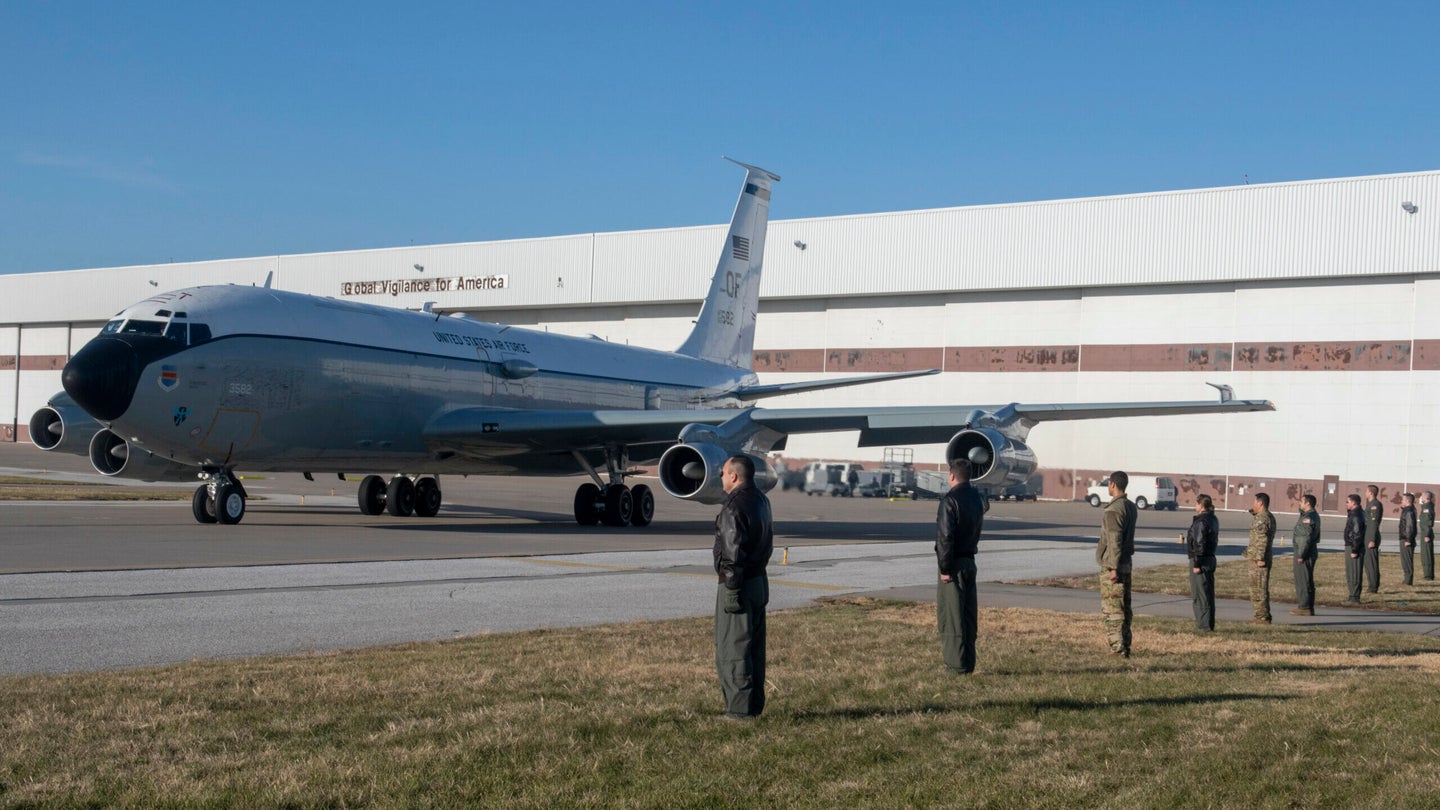 Few tears were shed this when a 56-year-old Air Force jet took its final flight out to the desert boneyard at Davis-Monthan Air Force Base, Arizona in November 2020. In fact, several airmen who once flew WC-135 tail number 582 bid the old plane — nicknamed ‘Lucifer’s Chariot’ — good riddance and hoped it never left the ground again.

“I hope they chop you up into small bits that aren’t used for anything,” said Will Markham, a pilot who flew 582 from 2015 to 2019, a period which he described as “four terrible and terrifying years that aged me well beyond where I should be.”

A former navigator on 582 quoted the TV show The Office to express what the plane meant to him.

Markham, Umholtz, and other members of the 45th Reconnaissance Squadron shared their hard-won memories of the plane at a retirement ceremony last week at Offutt Air Force Base, Nebraska.

“582, you’re a real nasty lady,” said Markham. “I had some great memories, but most of them involved getting off the aircraft and sprinting away from you.”

The gallows humor belies a deeply troubling situation: Offutt crews were forced to operate flying deathtraps for decades, and they only averted disaster thanks to sheer luck and the skills of the airmen. Worse still, it required outside pressure from the media and Congress for the Air Force to finally replace 582 and three other decrepit aircraft at the base.

A Constant Phoenix aircraft, 582 was one of two ‘nuke sniffers’ in the world, both of which were at Offutt. The aircraft were used to detect radioactive particulates in the air in support of the Limited Nuclear Test Ban Treaty of 1963, which prohibits any nation from above-ground nuclear weapons testing.

In 2017, 582 was on its way to perform that mission when one of its engines caught fire at 31,000 feet over the Indian Ocean; the jet’s 20 crew members recalled hearing a loud boom from the right wing, The Omaha World-Herald reported.

The pilots dumped fuel and headed for a civilian airport in Indonesia, the aircraft shaking violently the whole time as one of its two hydraulic systems failed. Flames were still trailing from the engine when they landed.

“Getting parts delivered and doing fixes here at home in Offutt is hard enough,” said Col. John Litecky, 55th Operations Group commander, at the retirement ceremony. “You can just imagine the logistical chain that was required to fix an engine halfway across the world.”

Worse still, the crew was stranded there without passports, so they had to sleep on the plane as they waited two weeks for a repair team to fly over. They took to calling the jet “Hotel 582” because, like the Eagles song “Hotel California,” you can check out any time but you can never leave.

“I’m pretty sure I’m no longer invited back to that country,” said Markham. ”Which is fine by me.”

Indonesia was far from the only near-death experience crews had aboard 582. Markham also recalled losing all their generators during a flight over the Black Sea. The generators never came back online, so they had to hand-fly — meaning no autopilot —through thunderstorms across Europe back to RAF Mildenhall in England.

“That was an unpleasant experience,” he said. “That wonderful wonderful aircraft definitely should have been retired 20 years ago. But who am I to say, I’m just the pilot.”

Maj. Tami Moses, a master navigator, described 582 as a cranky old bird and said it was fitting for the plane’s retirement ceremony to occur on Friday the 13th.

“There are some planes on the ramp that you go out and just talk nice to, tell them how amazing they are and they just fly wonderfully,” Moses said. “Then there’s 582. 582’s pretty angry. and if you’re angry with her, she will sometimes pull together and fly. Well, sometimes.”

Still, the plane had some upsides. Moses said it forced everyone on board to bring their A game, and each flight became a challenge to “find new ways to fly an unsafe flight safely back to base.”

Capt. Douglas Tupper, chaplain for the 55th Wing, said the plane had a way of bringing airmen closer to the almighty.

“Perhaps You wanted to remind us just how precious our lives are,” Tupper said in a prayer at the retirement ceremony, where he dubbed the bird ‘Lucifer’s Chariot.’

“Many of us wish nothing more than to weld 582 permanently to the ground,” he added.

Despite the challenges, at least one person enjoyed flying 582 because of its old-fashioned flight controls. Capt. Kyle Redfern told the Omaha World-Herald it was like driving a classic car with a stick shift and no power steering or brakes.

“Without a doubt, the WCs are my favorite to fly,” he said. “It takes a lot more attention, but it’s more of a pure flying experience.”

Still, Redfern acknowledged that the plane was a headache for maintainers and aircrews. It was probably even worse for their families: in 2018 the Omaha World-Herald published an investigation documenting hundreds of aborted missions and dozens of declared emergencies caused by Offutt’s aging jets.

The problems included a pressurization failure that made the cabin feel like the summit of Mount Everest; a broken cockpit windshield over the ocean, hundreds of miles from land; fuel gushing out from under a navigator’s console; and an intense, blowtorch-like galley fire.

“I’m trying to impress upon you my deep concern about what’s been going on,” Reg Urschler, a retired brigadier general who once commanded the 55th Wing, told the World-Herald in 2018, “and how bloody lucky this organization has been that it hasn’t had a tragedy.”

In fact, it was only after the investigation came out that members of Nebraska’s legislative delegation convinced Congress to replace four of the 55th Wing’s most dilapidated planes, including 582.

But the planes replacing them, three renovated KC-135R tankers that once belonged to the National Guard, are no spring chickens either. In fact, they’re nearly as old as 582, the Omaha-World reported.

Still, it’s better than nothing. Lt. Col. Andrew Maus, commander of the 45th Reconnaissance Squadron, said the new whips should give the squadron greater mission capability. And with less risk to crews, we hope.