“That plane means more to me than anything.” 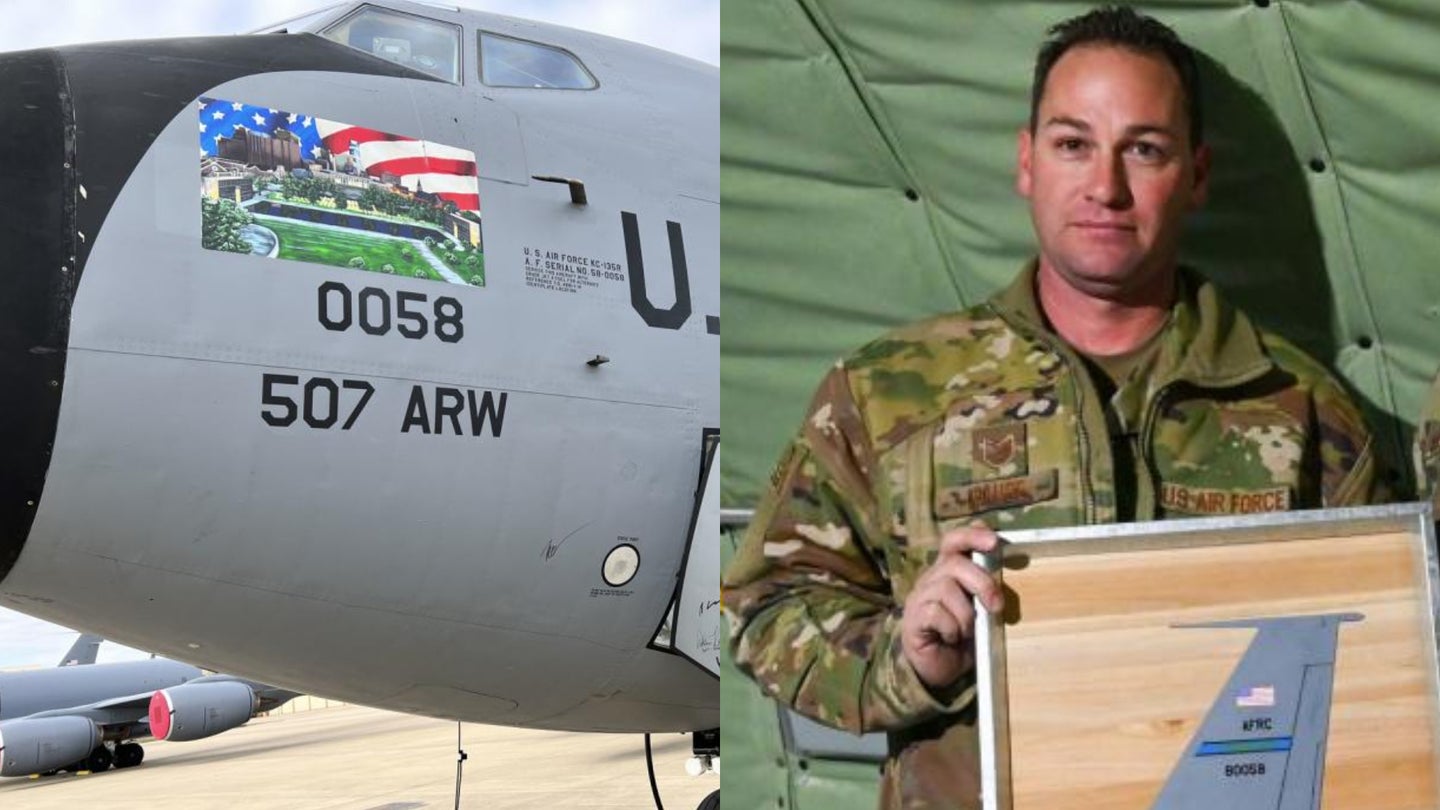 In the 2003 movie Master and Commander: The Far Side of the World, a sailor aboard the Royal Navy ship H.M.S. Surprise says about the captain that “there is enough of his blood in the woodwork for the ship to almost be a relation.”

U.S. Air Force Tech Sgt. Travis Krause no doubt feels the same way about tail number 58-0058, a 65-year-old KC-135 Stratotanker that he spent the past 12 years pouring his blood, sweat, and tears into so that the aged aircraft could keep flying.

“When I first heard this plane was getting retired, I thought ‘It’s time for me to retire, too,’” Krause said in a recent press release from the public affairs shop at Tinker Air Force Base, Oklahoma, where the airman is assigned. “That plane means more to me than anything, and she was the number one reason I stayed at Tinker for as long as I have.”

As the crew chief for 0058, Krause was responsible for keeping the jet in working order, but he also designed the nose art for it: a mural of the Oklahoma City National Memorial honoring the victims and survivors of the 1995 Oklahoma City bombing. Air Force aircraft usually do not receive the names, badges and battle flags that Navy ships enjoy, but that does not stop airmen from becoming deeply attached to their aircraft.

To an untrained eye, tail number 0058 looks like just another grey-painted military jet. But Krause sees a plane with “so much soul,” the press release said.

Tail number 0058 was officially retired on Dec. 16 after flying to the aircraft boneyard at Davis-Monthan Air Force Base, Arizona, where the dry desert air and high altitude will keep the jet preserved in case Uncle Sam calls on it or one of its spare parts in the future.

There is a chance 0058 may fly again someday. In the past, the Air Force has brought back ancient aircraft like the 60-year-old B-52 bomber ‘Wise Guy.’ When restoration crews began the long process to bring Wise Guy back to life, they found its old crew was just as attached to the jet as Krause is to 0058.

“This is 60-034, a Cold Warrior that stood sentinel over America from the darkest days of the Cold War to the global fight against terror,” a crew member had written on an interior panel of the aircraft. “Take good care of her… Until we need her again.”

Not all airmen fall in love with their jets. In fact, some crews learn to despise their aircraft. That was the case for WC-135 tail number 582, a 56-year-old jet nicknamed ‘Lucifer’s Chariot’ because of its tendency to nearly kill its aircrew with dramatic mid-flight mechanical failures.

“I hope they chop you up into small bits that aren’t used for anything,” Will Markham, a pilot who flew 582 from 2015 to 2019, said at the plane’s retirement ceremony in 2020. Markham described that period as “four terrible and terrifying years that aged me well beyond where I should be.”

“582, you’re a real nasty lady,” he added. “I had some great memories, but most of them involved getting off the aircraft and sprinting away from you.”

But for every despised jet, there are no doubt plenty of beloved ones.

“Separating us is like separating a cowboy from his horse,” another KC-135 crew chief, Master Sgt. Henry ‘Hank’ Dougherty said in 1963 about his aircraft, tail number 0016, when 0016 was transferred from his base at Tinker to Fairchild Air Force Base, Washington, according to a Tinker press release.

What do crew chiefs do when their old steeds are taken out to pasture? Rebuild with someone new.

“I picked up the jet’s replacement last month,” Krause said. “So now I just have to keep trucking on and treat it as if it’s my own until it feels like it is, years down the road.”