Here’s how Ukraine could use the Bradley Fighting Vehicles it’s getting from the US, experts say

Bradley Fighting Vehicles proved their worth in urban environments during the Iraq War. 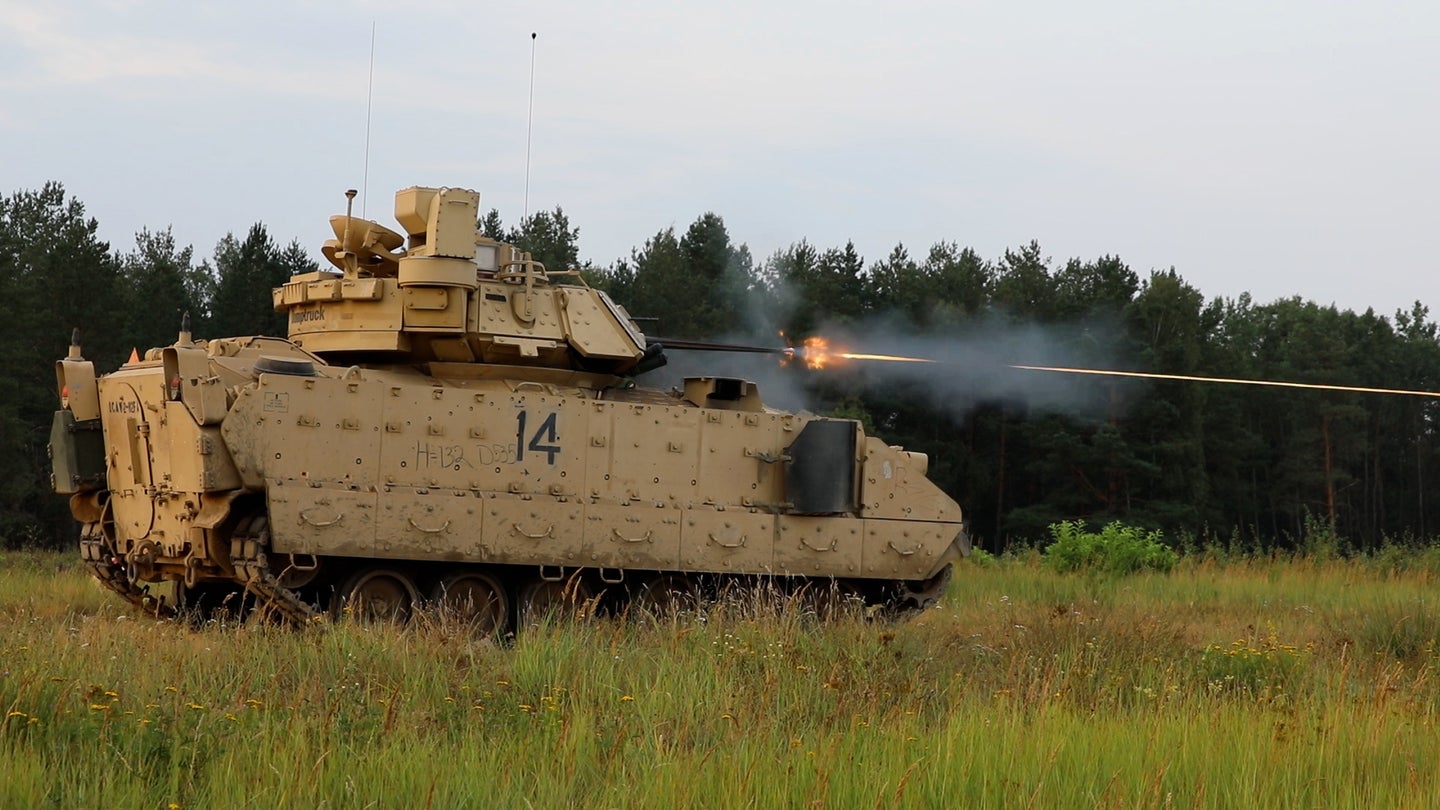 Soldiers firing the 25mm canon on a Bradley Fighting vehicle in order to zero the vehicles weapons systems at a range in Poland. (Staff Sgt. Charles Porter/U.S. Army).
SHARE

The U.S. government is expected to announce on Friday that it is providing Ukraine with Bradley Fighting Vehicles, which would offer Ukrainian troops greater protection and mobility than their Russian and Soviet-era vehicles, experts told Task & Purpose.

Air Force Brig. Gen. Patrick Ryder, a Pentagon spokesman, confirmed on Thursday that the next tranche of U.S. military aid to Ukraine would include Bradley Fighting Vehicles, but he had no further details.

Bradleys have several significant advantages over most of the fighting vehicles the Ukrainians had prior to Russia’s latest invasion, including older versions of Soviet-era BMPs and BTRs, said retired Marine Col. J.D. Williams, a defense policy researcher with the RAND Corporation.

Because they are tracked vehicles, Bradleys are much more mobile than wheeled vehicles, especially during Ukraine’s muddy winter and spring months, Williams told Task & Purpose.

Bradley Fighting Vehicles also have more modern combat systems — including optics, firing systems, and communications — than their Soviet-era counterparts, he said. Bradleys are armed with a 25mm gun and TOW anti-tank missiles, and many of the vehicles have upgraded armor that make them more survivable than BMPs and BTRs.

BMP-1s and BMP-2s, for example, are lightly armored and have exterior fuel tanks on the rear doors from which troops exit and enter the vehicle, making them vulnerable to ambushes from the rear, he said.

Both Soviet-era and Russian tanks, for example, have autoloaders at the base of their turrets that hold up to 20 rounds of ammunition — all of which are likely to explode if the tanks are hit, Chiarelli noted. When that happens, the tank turrets are thrown into the air in a horrific explosion known as the “jack-in-the-box-effect.”

The added protection that Bradley Fighting Vehicles provide to their crew and the troops inside would be especially important to the Ukrainians given the size of their forces and how long they have been fighting, Chiarelli told Task & Purpose.

“They provide tremendous overwatch to infantry,” Chiarelli said. “You’re able to move them in a relatively secure vehicle to a position of advantage. I’m sure the Ukrainians will be able to get more [troops] in them because they don’t have quite as much kit as we do — possibly as many as 10 folks in the back of that thing.”

During the Iraq War, Bradley Fighting Vehicles proved their value in urban environments, he said.

If the Ukrainian military launches an offensive against Russian forces, the Bradley Fighting Vehicles would be more useful than Ukraine’s current fleet of BMPs, in part because Bradleys have a better fire control system than their Soviet and Russian counterparts, said Hlib Parfonov, a defense analyst who works with the Jamestown Foundation think tank in Washington, D.C.

The main challenge would be making sure the Ukrainians have enough spare parts to repair and maintain the Bradleys, said Parfonov.

Not only have the Ukrainians already received several other types of fighting vehicles — such as American M113 Gavins, British FV103 Spartans, and French VABs — but the Ukrainians also use captured Russian vehicles, such as BMP-3s.

“Maintenance in UAF [the Armed Forces of Ukraine] is another side of hell,” said Parfonov, adding they have a “zoo” of various kinds of vehicles, making it difficult to find spare parts, Parfonov said.

But retired Army Lt. Gen. Ben Hodges, former commander of U.S. Army Europe, noted that the United States has thousands of Bradley Fighting Vehicles, so finding spare parts for the Ukrainians should not be a major challenge.

“One of the things that I would like to see us, the United States and others do, is help establish maintenance capability inside Ukraine for them to work on all these different vehicles vs. having to bring them back to Poland, or Germany, or Slovakia, or wherever,” Hodges told Task & Purpose.

Hodges proposed that private industry could help the Ukrainians develop their abilities to repair their assortment of military vehicles and other equipment, or the U.S. and its allies should train Ukrainian mechanics so that the work can be done inside Ukraine.

Ultimately, it may be easier to help the Ukrainians repair Bradleys than finding spare parts for their older Soviet and Russian vehicles, Chiarelli said.

Chiarelli also said he expects it would take weeks rather than months to train Ukrainian troops how to operate Bradleys because they have proven to be very adept at learning how to use new technology quickly, such as High Mobility Artillery Rocket Systems, or HIMARS.

The key thing to remember about Bradley Fighting Vehicles is that they work together with dismounted infantry, he said.

“The Ukrainians, from everything that I’ve been able to see from afar, understand the criticality of the armor-infantry team in looking at urban areas,” Chiarelli said. “The Bradley will provide the kind of overwatch for the dismounted infantry — and the dismounted infantry will provide the near-in protection for the Bradleys in urban areas. Neither one of those does very well without the other in urban areas — or anyplace else. It’s the infantry-armor team that is so effective.”