“If the Captain ever sees this log, my Gawd, what will he do.” 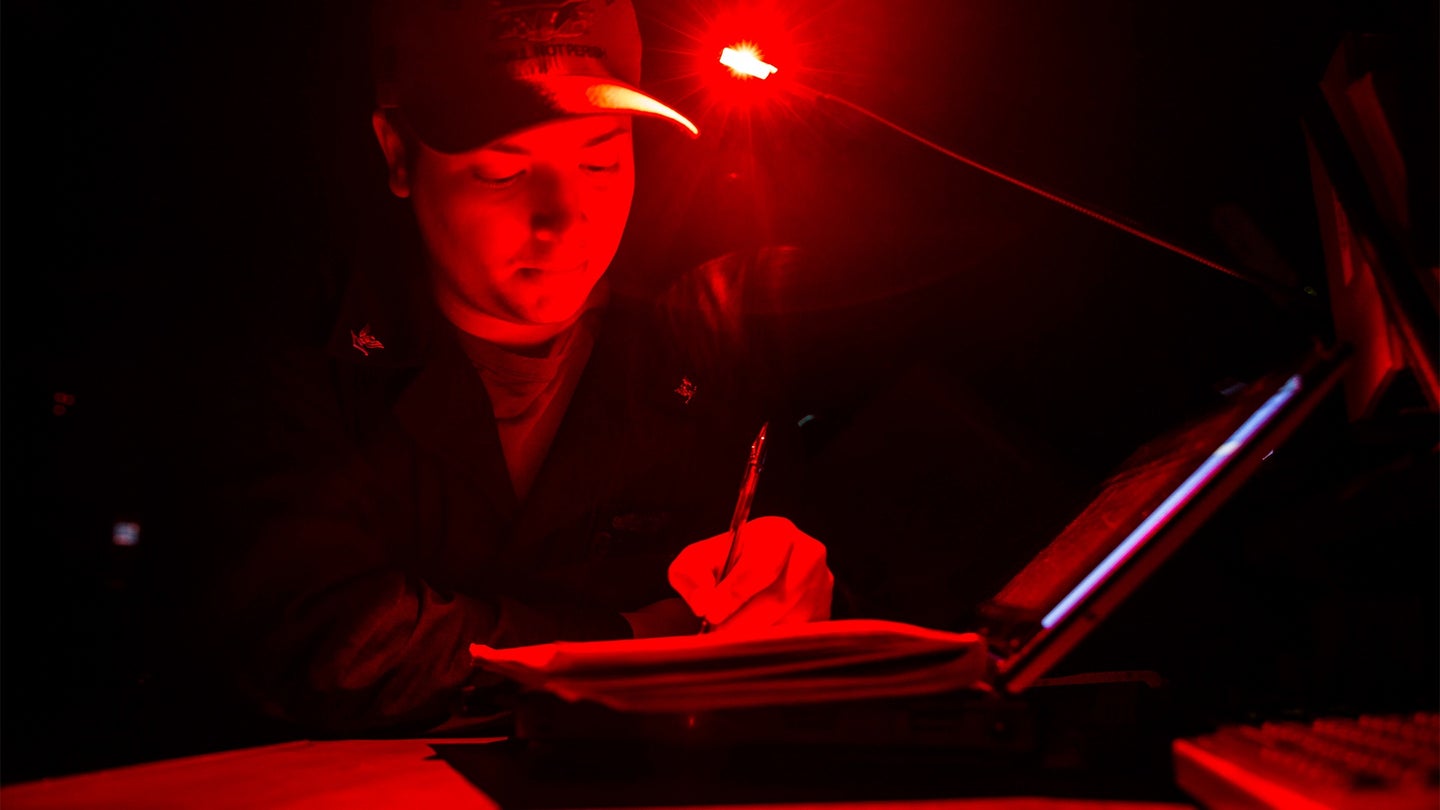 Whether at sea or in port, in peacetime or at war, every moment of a Navy ship’s existence is tracked. The deck log, prepared by the officer of the deck, chronicles where the ship has been, what has happened aboard, and anything of significance that occured during the watch. Being a military document, it generally makes for pretty dry reading. The deck log for the 8 a.m. to noon watch of the battleship USS Missouri for Sept. 2, 1945, for example, noted the end of World War II with, simply, “the ceremony commenced and the Instrument of Surrender was presented to all parties.” There is one exception, though: the very first watch of the new year, from midnight to 4 a.m., when it’s acceptable to record the deck log in rhyming verse.

“Yet in Manila Bay in berth Cast-8, we seem to be anchored in a world without hate; The night filled with sound but yet without strife, on Blackhawk and Pacos and Asheville nearby, are officers with the duty even as I,” wrote Ensign R. E. Fahnestock aboard the cruiser USS Marblehead in the first few hours of 1941. “They’re thinking as we are of dancing and beer, and muttering gloomily, Happy New Year.”

A year later, with America now at war, Lt. j.g. Brogger aboard the destroyer USS Gilmer wrote, “Young Blatz is on the sound gear, and Bowles is on the phones; Sheller’s on a machine gun, but his thoughts are at home.”

And in 2021, Lt. Jg. Jacob Singleterry aboard the destroyer USS Roosevelt wrote, “It’s 2021, past midnight on New Year’s Eve, I still have eight hours until I’m relieved; Now one doesn’t need 20/20 vision to see, this year’s been rougher than a ship swept by the sea; But a ship is made tougher than the waves that test her haul, we will never waver, nor stumble, nor stall; On the deck plates we’ll muster, from the deck plates we’ll call, ‘a sailor stands ready! With honor, over honor, over all.’”

The log, of course, still has to fulfill all Navy requirements, noting every detail of the ship’s disposition. The chance to show a little bit of creativity with a rhyming poem simply offers a small respite from marking the start of the new year with what very well may be a lonely and uneventful watch.

As Capt. Robert McNitt wrote in a 1959 issue of Proceedings, “The poetic license invoked in rhyming the berth and anchor bearings or course and speed, boilers in use, ships present, wind, weather, and tide has often been fearful and wondrous to behold. Yet, as always in folk songs and stories, there is a message expressing the mood of the times and the personality of the author.”

Aboard the battleship USS Idaho in 1927, Ensign Kivette wrote, “To cook our chow and give us heat, steams boiler Number Nine; From ten days leave came Ensign Clark, to finish this damned rhyme.”

Like many traditions, just how exactly this one started is unclear. In the early years of the service, the Navy adopted many traditions from England, but this custom is not practiced by the Royal Navy. Going by the log books themselves, though, it appears to go back more than 100 years. Aboard the USS Idaho, which marked the start of 1926 in San Pedro, California, Ensign E.V. Dockweiler was apparently not impressed with the conditions in the port, writing “We are anchored in Pedro Harbor, tho there isn’t much of a lee, and why they call it a harbor, is something I never could see!” A message from the ship’s captain, however, noted that he was “glad to see that the old Navy custom of writing up the first watch of the year in rhyme is known to the younger members of the Service. The watch stands as written.”

Not every Captain seemed to enjoy this unofficial tradition, though.

In a 1972 issue of Shipmate, an alumni magazine for the Naval Academy, Lt. Jg. Arthur Ageton, who spent New Year’s 1926 aboard the battleship USS Pennsylvania, said “Skipper was a humorless fella who had never heard of this tradition and sent the Log back to me for rewriting in less rhythmical style.”

The rhyming deck logs have become less common over the years. In the 1960s, Navy Times received hundreds of submissions for a yearly contest. In 2016, though, there were fewer than 30 entries. Still, while it may be less common, some officers who spend New Year’s Eve overseeing the operations of a Navy ship still keep up the tradition.

As one officer aboard the USS Lake Champlain wrote of 2021 becoming 2022, “A starry night in the 7th Fleet, another year we sail to meet; 3,000 miles across the mighty Pacific, how could we not miss it?”

Just make sure that the ship’s captain is aware of the tradition too. As Ensign Dockweiler aboard the USS Idaho concluded his deck log entry in 1926, “That’s all the dope this morning, except just between us two; If the Captain ever sees this log, my Gawd, what will he do.”