Complaining is the universal language of military service. 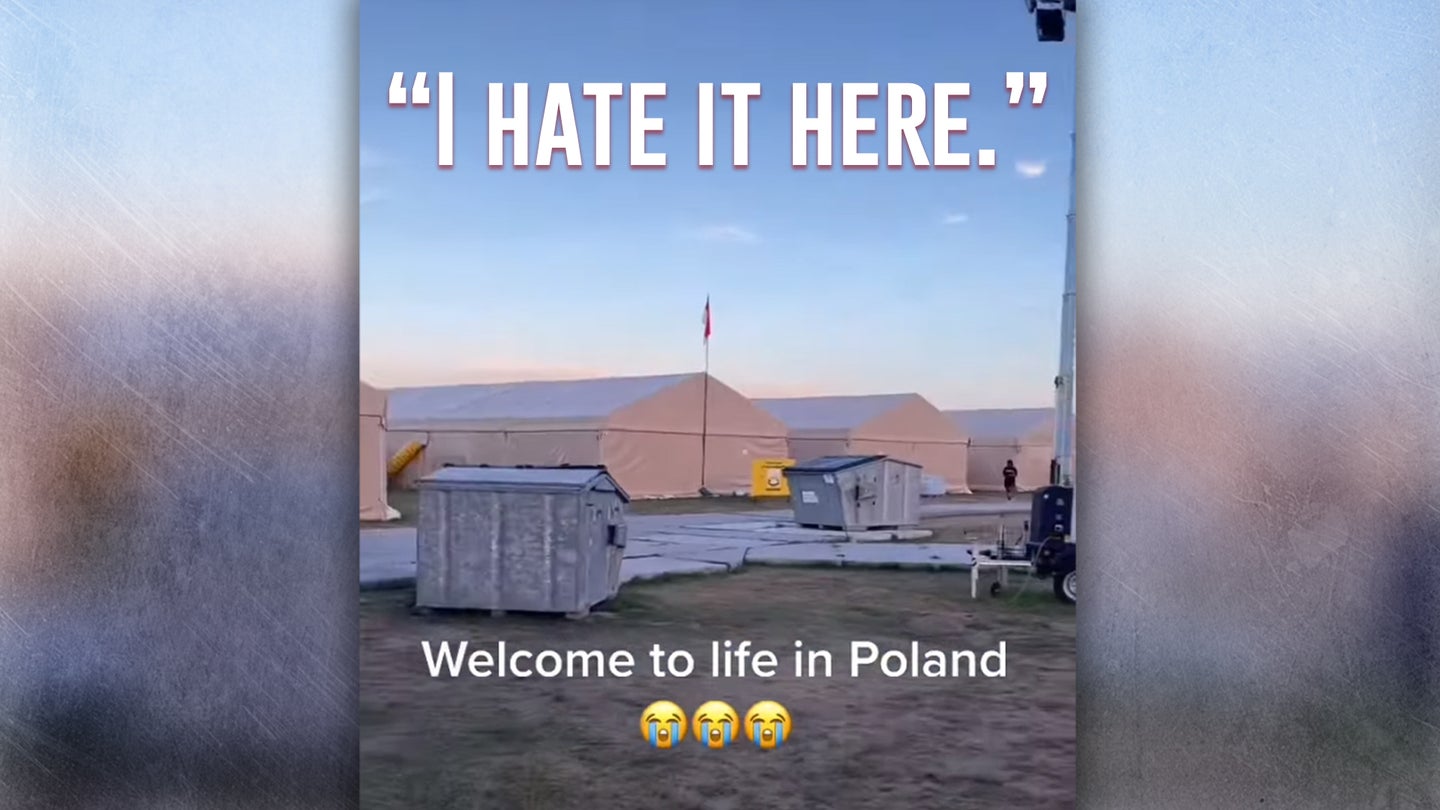 It's time to worry when soldiers stop complaining. (Screenshot via TikTok).
SHARE

Give a soldier an entrenching tool and tell him to dig a foxhole, and he’ll do it, but he’ll bitch about it the entire time. Give a soldier a signing bonus and he’ll take it, spend it, and then immediately start griping about how it wasn’t enough money. Complaining in the military is like breathing, or chow: it is continuous.

Given the opportunity, “the troops” will bitch about anything, even if they have everything — which brings us to a recent video that’s been making the rounds on social media:

The video was posted to TikTok by a soldier deployed to Poland — where the U.S. has moved additional troops in response to the ongoing Russia-Ukraine conflict — and begins with him giving a panoramic view of a large tent with electricity and, presumably, environmental controls like heating and air conditioning. Next, the camera leads the viewer outside, where they can take in a vista of relative nothingness dotted with more tents, as well as functioning restrooms, showers, laundry rooms, and a large dining facility. The video ends with the soldier dramatically stating “I hate it here,” which is probably the most spoken phrase on any deployment in the history of deployments.

However, the conditions of the base look, well, pretty standard. Nice, even. It’s like any large base in the rear, where folks fly in and out of on either end of their tours — a place to get a warm meal and clean up as you scowl jealously at the people who stay there over the course of their deployments rather than shuffling off to far-flung patrol bases with little-to-no amenities.

At least, that’s how this video appears if you’re seeing it with the bloodshot and heavily bagged eyes of a Global War on Terror era veteran. Indeed, when the video was later reshared on Twitter, it was met with a collective eye roll from veterans of the last 20 years who likely looked upon the showers and toilets with running water in the distance and saw not an austere hellscape, but a pretty sweet set of digs for a deployment.

In the deluge of comments that followed, U.S. service members and veterans remarked on their past tours overseas and the truly shit conditions in which they operated, from sleeping on the dirt, living atop each other in cramped tents with 18 of their closest friends, or wearing the same set of clothes for months on end. And there were of course the predictable comments about how deployments were harder back in Afghanistan and Iraq, which is not at all surprising since those were warzones and not bases on allied soil.

While it would be tempting to do a rapid recounting of all the things in this clip that aren’t worth bitching about — namely everything — it seems almost unfair to ridicule a soldier for taking part in that most sacred of military traditions: bitching and moaning. Finding something to gripe about is part and parcel of military service, and it’s often performative as one service member loudly complains for the benefit of others. Rarely does anyone actually expect anything to be done to fix it; rather, it’s just something to do.

A belligerent attitude might as well be at the top of a service member’s issued gear list. It is just part of being in the military, from today’s young soldiers, to their recent forebears from the GWOT era — who have now assumed the role of “back in my day” grumpy old vets and senior leaders. On and on it goes, through the years and wars.

In fact, those who were bothered by this soldier’s video might actually owe him a bit of gratitude, seeing as he gave everyone else something to bitch about, too. And we all know how fun that is.