A Virginia country club made a 9/11-themed menu. It was as awful as you’d imagine 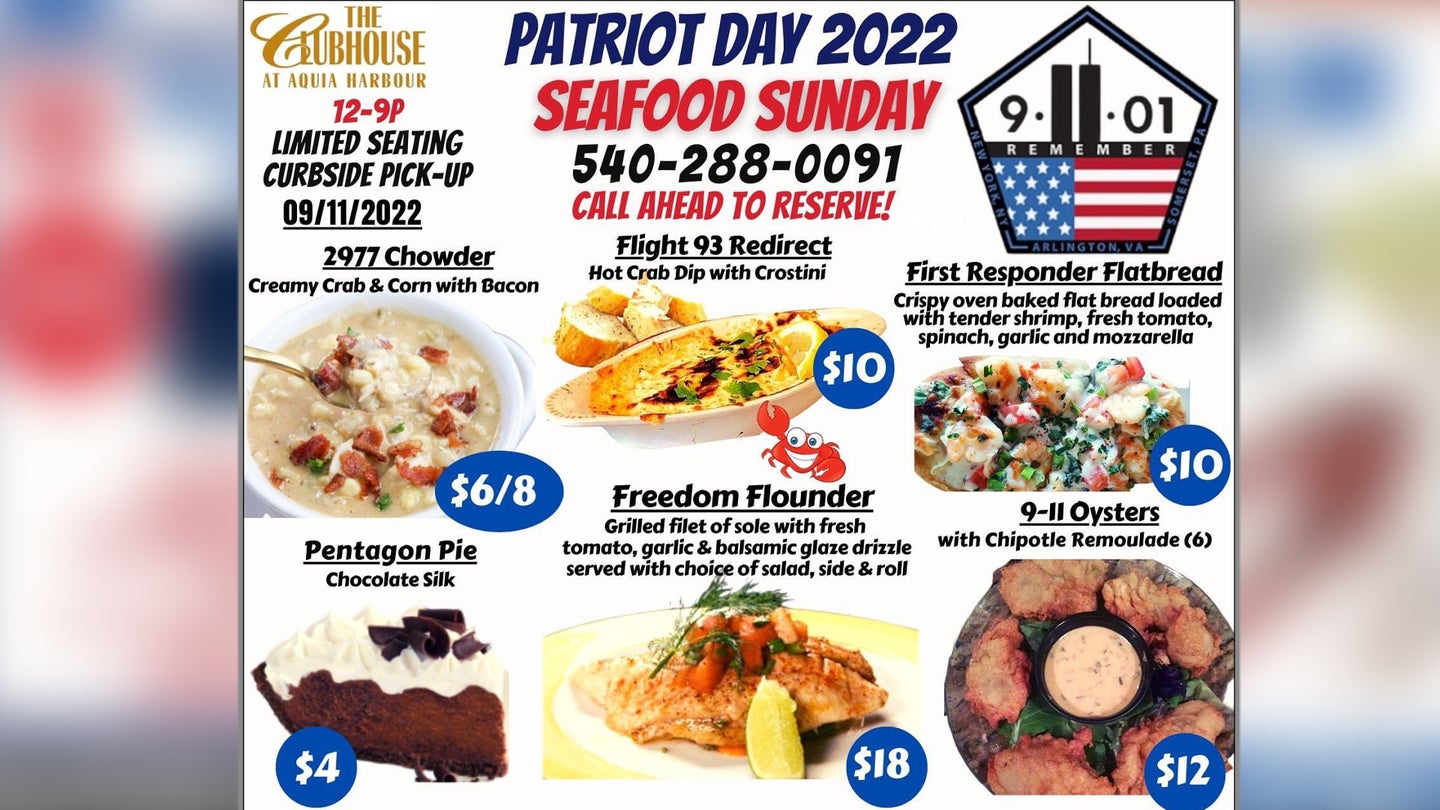 In case you were wondering when 9/11 was going to become a tacky holiday, that day is today. At least, that was the case for one country club in Virginia that decided to unveil a special menu to commemorate the tragic day.

Yes, it was an unprecedented terrorist attack that killed thousands of innocent civilians and led to decades of military deployments as part of the sprawling and nebulous Global War on Terror — that’s still going on in some capacity — but also … crab dip.

The Clubhouse at Aquia Harbor is a country club and golf course in Virginia. And, clearly exercising all manner of rational thought, the business decided to commemorate Sept. 11, 2022 with a 9/11-themed seafood menu.

If this sounds like a headline from The Onion, it is not, although it is basically bringing to life an actual headline from the parody paper that’s almost a decade old.

For an appetizer, you can start with the “Flight 93 Redirect,” the country club’s name for some hot crab dip with crostini — and a tasteless reference to the flight that crashed in Somerset county, Pennsylvania, after passengers and crew attempted to regain control of the aircraft from hijackers, and in so doing, gave their lives and prevented the plane from reaching its intended target in Washington, D.C. Or there’s the “9/11 oysters.” And while nine or 11 oysters with chipotle remoulade does sound appetizing, it might not be in keeping with good taste.

Moving onto the main course, there are the options, from the “First Responder Flatbread” to the “Freedom Flounder.” Finish it off with some “Pentagon Pie” chocolate silk cake and wash it all down with a “Remember-tini” cocktail. Is the “Remember-tini” just cheap vodka mixed with some Rip Its? No, of course not, this is a civilized establishment.

While someone apparently went through the entire process of creating the menu without questioning if it was a good idea, no one will get to sample the bounty of the “Never Forget Sampler,” as Aquia Harbor has pulled the menu, so patrons will presumably have to chow down on some crab dip-themed crab dip instead.

A manager at the establishment apparently posted an apology on Facebook, writing “I apologize for those I offended with the 9/11 seafood Sunday post. My intention was to bring attention to that horrific day 21 years ago.”

Attention was certainly brought, not the positive kind, though.

Of course, 9/11 is more than two decades old. The vast majority of those who were in uniform during the 2000s have since been discharged, and the Global War on Terror is, functionally, over. Sort of. Like every other anniversary, for most it will fade into memory and become just another day. But as fun as it is to stuff yourself stupid with shellfish, maybe don’t try to make a holiday out of 9/11.