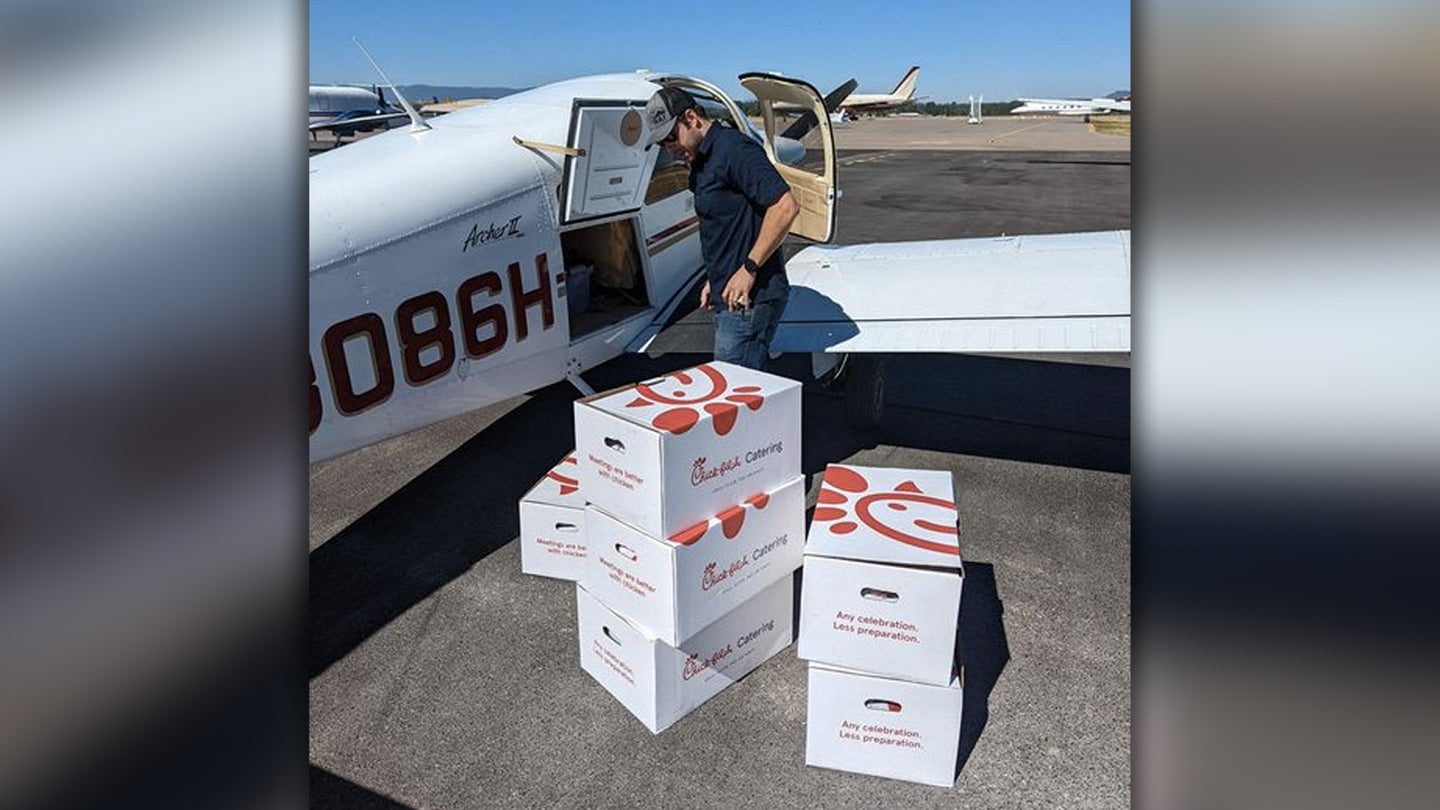 Airmen at Malmstrom Air Force Base, Montana had 300 Chick fil-A sandwiches flown in to show support for the junior enlisted. (Malmstrom 5/6 Alliance).
SHARE

It’s a well-known fact that chickens can’t fly, but anything is possible in the U.S. Air Force, where a few airmen coordinated a plane full of 300 Chick-fil-A chicken sandwiches to fly onto the remote Malmstrom Air Force Base, Montana on Tuesday to show appreciation for the junior enlisted airmen working at the nuclear missile base.

The Chick-fil-A flight took three months of planning, but the 300 sandwiches, which junior enlisted airmen did not have to pay for, were gone in about three minutes, said Tech Sgt. Harrison Burkardt, president of the Malmstrom 5/6 Alliance, which organized the effort. The alliance is a group of airmen at the E-5 and E-6 ranks who act as a liaison to senior leadership, mentor younger airmen, and promote community service and esprit de corps, according to the group’s Facebook page.

Malmstrom has had some tough times recently: local news reported three deaths by suicide at the base in the first few months of 2022. While there are about 60,000 people in the nearby city of Great Falls, that’s the largest city for more than a hundred miles around.

“Malmstrom AFB is a more remote location compared to other installations which means we don’t have some of the amenities you would typically find,” Burkardt said. “During a recent 5/6 monthly meeting, our team of [noncommissioned officers] brainstormed a plan to give back to the airmen and show them leadership truly cares.”

The plan eventually became Airmen’s Appreciation Week, a four-day series of events including a kickball tournament, tickets to a local professional baseball game, and of course, free chicken sandwiches. Many Americans and service members enjoy Chick-fil-A, to the point where some airmen joke that they would sell out their buddies for a sandwich from there. The problem is that the nearest Chick-fil-A to Malmstrom is about a 3.5-hour drive away which is not ideal for transporting fresh warm sandwiches.

The 5/6 Alliance’s true vision was to have the sandwiches air-dropped onto the base via parachute, but eventually, the actionable plan was to fly them from runway to runway.

“I knew a local friend who had an airplane and suggested a flight rather than a whole day on the road,” said Chief Master Sgt. Michael Becker, command chief for the Malmstrom-based 341st Missile Wing.

“Pitching this idea to wing leadership was interesting (in a humorous way),” Burkardt said. “Once the 5/6 team shared the ideas with 341st Missile Wing leadership, they immediately bought in, supported, and offered resources (pilot).”

The pilot is not affiliated with the Air Force in any official capacity, but he sure showed his support by cramming every square inch of his small propeller plane with boxes of sandwiches.

“They literally could not have stuffed another sandwich in the airplane this year,” Becker said.

When the sandwiches arrived, the junior enlisted airmen were ready. Burkardt said they formed a line out the door of the Grizzly Bend club and community center where the 5/6 Alliance distributed the sandwiches 30 minutes before the event started. The sandwiches were gone within minutes, but base leadership also provided beverages and many of the airmen stuck around for an hour afterward to hang out.

“It was awesome to see them stick around an hour after and enjoy their time,” Burkardt said.

The sandwiches were for enlisted airmen ranked E-1 to E-4 only and were “targeted to show gratitude and appreciation toward their contributions to the mission,” he explained. Unfortunately, there were not enough sandwiches for everybody, but the 5/6 Alliance is taking that as a lesson learned for next time, and hopefully, there will be a next time.

“This event was a test run,” Burkardt said. “We hope to gain more support as we make next year a better event.”

The event even got a shout-out on the popular Facebook page Air Force amn/nco/snco. Free food from leadership is often a nice gesture. Back in 2020, when he was still command chief of the 412th Test Wing Chief at Edwards Air Force Base, California, Chief Master Sgt. Ian Eishen won praise for handing out energy drinks when the local commissary ran out, and for smoking turkeys for airmen in the dorms for Christmas.

“You’re a stud, Chief. Taking care of your dudes,” wrote one Reddit user at the time.

Many Americans don’t think of the Minuteman III intercontinental ballistic missiles that the Air Force has kept on alert for almost 60 years, but it’s the enlisted airmen eating chicken sandwiches on Tuesday who keep those missiles running.

“This wing has never taken a knee, never taken a day off, not since October 1962,” Becker said. “That rate of success would not be possible without the young airmen who secure our weapons, maintain the weapons systems, feed the force, run the personnel and pay programs, fix the vehicle fleet, and operate and maintain the facilities and infrastructure.”

The mission still happens even if colonels and chiefs don’t come to work, Becker explained, but if the junior airmen don’t, then “we’re a complete failure.”

Still, many of those young airmen have never been as far north or west as Malmstrom, he said,  and while the wing leadership can’t change the base location, they can try to make the base as fun and comfortable for them as possible.

“We hope that yesterday’s chicken sandwich delivery gave them a little bit of happiness which they so richly deserve,” Becker said.