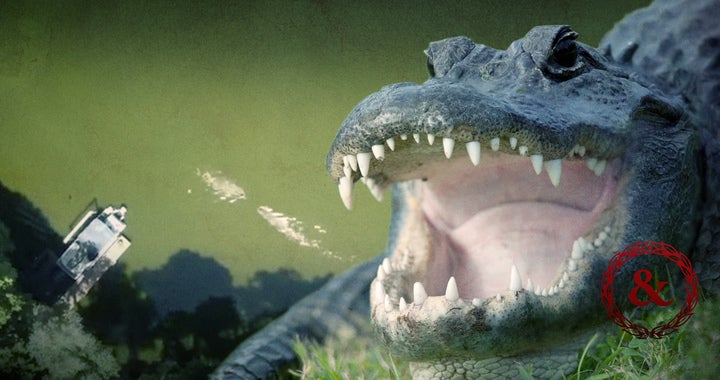 A Florida man and former Air Force pararescueman is out of the hospital after fending off an alligator attack.

On Aug. 3, Defeats was swimming in Lake Thonotosassa, near Tampa, Fla., filming a promotional video for his company. A friend was filming overhead with a drone, which captured the alligator, estimated at 12 feet long in length, closing in on Defeats.

“With the right stroke, all I felt was scales, teeth and then right there I’m like okay. So, what I think I did, what I felt like I did, was that I immediately tried to open its jaws because I knew I was in a gator,” Defeats said, speaking for all of humanity in his desire to not be in an alligator. The effort, he told a local Fox station, required a lot of belief in himself.

Defeats then essentially punched his way out of the alligator attack, sticking his hand in the reptile’s mouth. After struggling for a few seconds, the creature released him, and Defeats managed to swim to a nearby dock, where he was soon driven to the hospital.

There, he underwent six hours of surgery to repair the damage from an alligator biting his head, including a fractured skull, broken jaw and nerve damage. After more than a week of recovery, Defeats was released from the hospital, although his jaw is still wired shut and he’ll need another surgery to place a plate over his brain.

Aside from, you know, being an alligator that has evolved over millions of years to thrive in the wild, attacks on people are still rare. In 2021, only nine biting incidents in Florida were determined to be unprovoked.

Still, maybe when it comes to Florida, alligators and lakes, staying on shore might be best for everyone involved.