How airmen overcame -77 degree weather, frostnip to fix a C-130 in Antarctica

Not exactly the sunny duty assignment of your dreams. 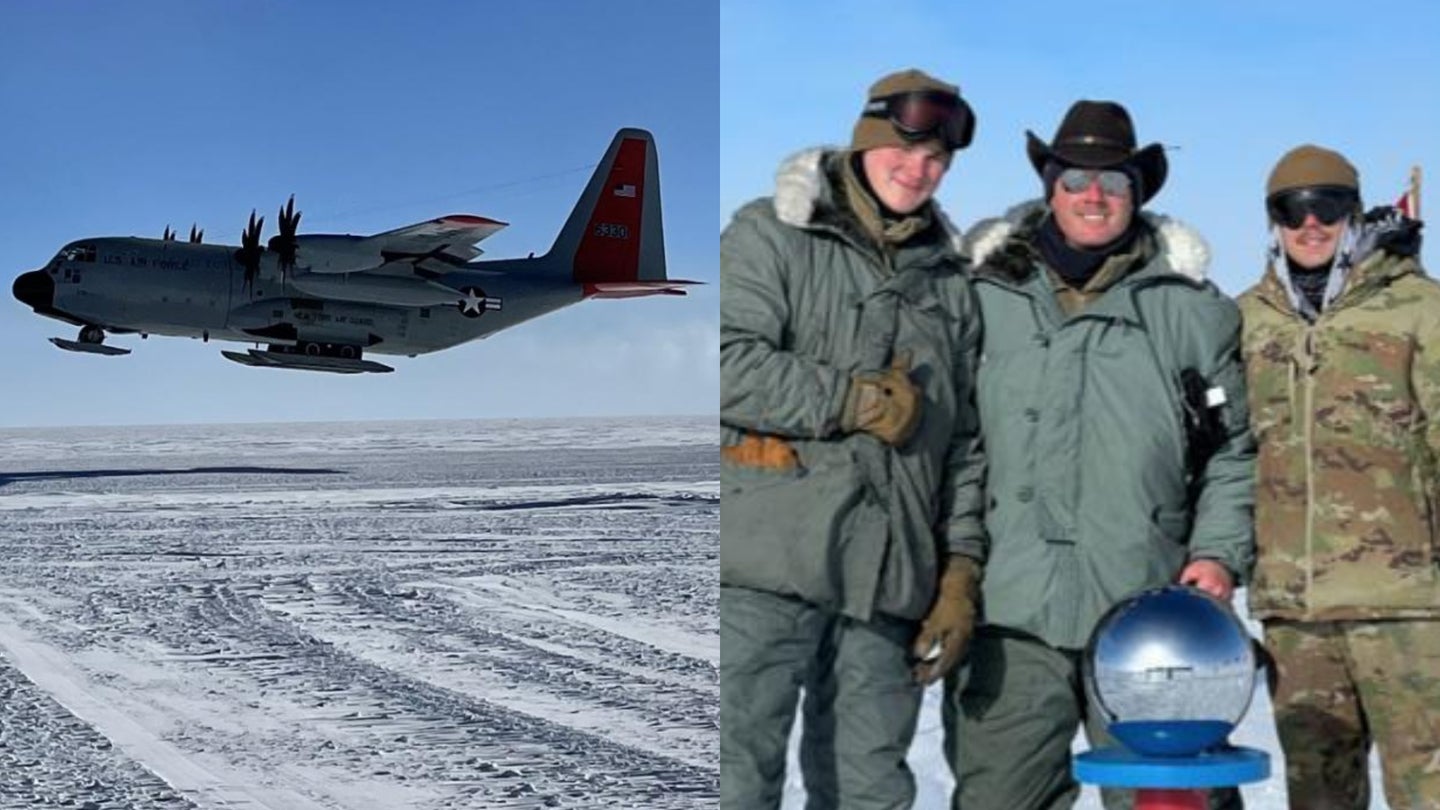 Task & Purpose photo illustration (Left, A LC-130 Skibird takes off from Amundson-Scott South Pole Station after being repaired on the open skiway. Right, The maintenance recovery team (from left) Staff Sgt. Grant Santese, Tech Sgt. Daniel Craig and Staff Sgt. Jonathan Hooker, worked tirelessly for two days in extreme weather at the South Pole to get a LC-130 Skibird airborne after a mechanical malfunction at the end of November, 2022. (109th Airlift Wing).
SHARE

Over Thanksgiving, while most Americans enjoyed a hearty meal in the warmth of their homes, three Air National Guardsmen braved extreme temperatures on the endless ice of the South Pole to fix a plane that helps feed and supply an entire continent.

The plane in question was an LC-130 ‘Skibird,’ the largest ski-equipped aircraft in the world, according to a recent press release written by the public affairs office for the New York Air National Guard’s 109th Airlift Wing, which operates the Skibird and its four sister ships.

Though larger aircraft like the Air Force C-17 transport jet can land at McMurdo Station on the Antarctic coast, the LC-130, one of many variants of the Air Force’s C-130 transport plane, can fly deeper into the continent to drop off scientists and supplies at remote research stations like the Amundsen-Scott South Pole Station, about 850 miles south of McMurdo. These resupply missions are part of Operation Deep Freeze, the U.S. military’s ongoing effort to support the National Science Foundation’s Antarctic research.

Though five aircraft may not sound like a lot, last year they transported 204 passengers and 357,926 pounds of cargo across 40 missions to research stations throughout Antarctica, according to the 109th. Any single aircraft down for repairs could seriously reduce that number.

“We deploy with a finite number of aircraft,” Maj. Jim Roth, the commander of the 109th Maintenance Squadron, said in the press release. “Our members know the importance of returning these planes to fully mission capable status as soon as possible.”

It was on one routine resupply mission to the South Pole Station this November when a cable controlling the elevator on a Skibird’s tail broke. Elevators are a set of flaps that allow the aircraft to point up or down, so they are important for vital tasks like taking off and landing. Without a functioning elevator, the Skibird was stuck at the South Pole, and somebody was going to have to come and fix it.

That task fell to Staff Sgt. Jonathan Hooker, a crew chief from 109th Airlift Wing, Staff Sgt. Grant Santese, an aero-repair craftsman from Pennsylvania’s 193rd Special Operations Wing, and Tech Sgt. Dennis Craig, a hydraulics craftsman from Kentucky’s 123rd Airlift Wing. It is not uncommon for Air Force planes to be stranded in unusual locations while they await repairs or spare parts, but the South Pole must be among the most desolate.

There are no hangars or aircraft shelters at the South Pole, the press release explained. Usually, aircraft land on the skiway (the term for a snow runway), unload cargo and passengers and take off again. That meant the marooned LC-130 was stuck in the open in -40 degree Fahrenheit temperature, which was about -55 degrees with windchill. Such circumstances are not unfamiliar to the 109th, which hosts an intense arctic survival training course in Greenland as a requirement for aviators who want to fly on the Skibird. Still, it was no less challenging for the airmen who flew to the South Pole to fix the broken bird.

“It was a struggle to maintain warmth and we began to have symptoms of frostnip from the extreme cold and cyanosis from the 9,600-foot elevation we were working at,” Craig said in the press release.

Cyanosis is the term for when low oxygen levels in the blood give a blue tint to the skin, lips, gums, and nail beds, according to the Cleveland Clinic. Low blood oxygen levels can lead to serious heart, lung, or blood conditions. Both extreme cold and high altitude, where the air is thin, can contribute to different forms of cyanosis, and the bottom of the world had spades of both, especially when temperatures dipped to -77 Fahrenheit on the second day of the repair effort.

Still, the South Pole Station is not without amenities. There is a 70,000-square-foot building there with a game room, dining hall, gym, and space for 150 people, the press release said. But because of COVID-19 isolation procedures, the visiting airmen had to isolate in a small hut near the station at night, then work on the aircraft while exposed to the freezing cold during the day. But Craig, Santese, and Hooker somehow made it work., fixing not only the elevator issue but also an engine low oil issue. Two days later, a new aircrew arrived and the LC-130 returned to the sky.

“This aircraft rescue was a reminder of the daunting tasks that are down here, working in austere environments,” Chief Master Sgt. Ron Jemmott, the superintendent of aircraft maintenance at McMurdo Station, said in the press release. “It takes a toll on your body but they keep a positive attitude and get the job done”.

Craig, the recovery team leader for the mission, seemed to enjoy the work.

That positive attitude may continue to pay off as the Air Force and the U.S. military writ large hope to fortify the Arctic against Russia and China, who also claim the space as global warming carves new shipping routes out of the melting ice and reveals new areas for fishing and oil drilling. The ski-equipped LC-130s of the 109th Airlift Wing may play a key role in establishing that presence since the U.S. has few icebreakers that can move troops and supplies far north.

Equipment is not the 109th’s only unique trait. Experience plays just as key a role in surviving Arctic and Antarctic conditions, and some experts argue that the U.S. military lacks that experience. Arctic survival training is not quite the same as cold weather training in upstate New York or alpine training in the Rocky Mountains, wrote Army Majors W. Barrett Martin, Michael Tovo, and Devin Kirkwood, all members of the 10th Special Forces Group, in an essay published in October in the Air Force’s Journal of Indo-Pacific Affairs.

Even the most qualified mountain team in a Special Forces unit would not be considered Arctic-capable, the majors said. What makes the Arctic unique is the “near-constant darkness and cold in the winter juxtaposed with near-constant light and impassable terrain in the summer months,” due to the swampy conditions caused by summer thaws, they wrote.

The 109th Airlift Wing seems to have a start on fixing the issue with Barren Land Arctic Survival Training (BLAST), the school which teaches airmen how to survive a frozen wasteland with nothing but the supplies found aboard an LC-130. Sometimes the training ends up becoming a real-world survival scenario.

“The day before we were supposed to leave we got hit with a massive blizzard, the plane was unable to pick us up. I mean, you couldn’t see your hand in front of your face it was so bad,” said Captain Nick Margaglio, a LC-130 pilot, in a February press release. “It went from training to real world and we had to sit and wait it out. We sat in there for 24 hours and just listened to the deafening wind.”

The Air Force also has the so-called ‘Cool School,’ a camp located well inside the Arctic Circle at the northernmost point of Alaska, where students contend with 50-mile-per-hour winds, negative 60-degree temperatures, and constant near-darkness as they learn how to build snow caves and igloos, signal for rescue, and learned from local Indigenous people how to find food and stay healthy.

Hopefully, those skills will prepare airmen so that if they have to repair aircraft under fire in sub-zero temperatures, they will know how to survive and succeed.

“It has been extra cold this year on the ice,” said Craig, “but the 109th has a way of bringing everyone together and encouraging individuals to overcome adversity and hardships and get the mission done.”