"You couldn’t see your hand in front of your face it was so bad." 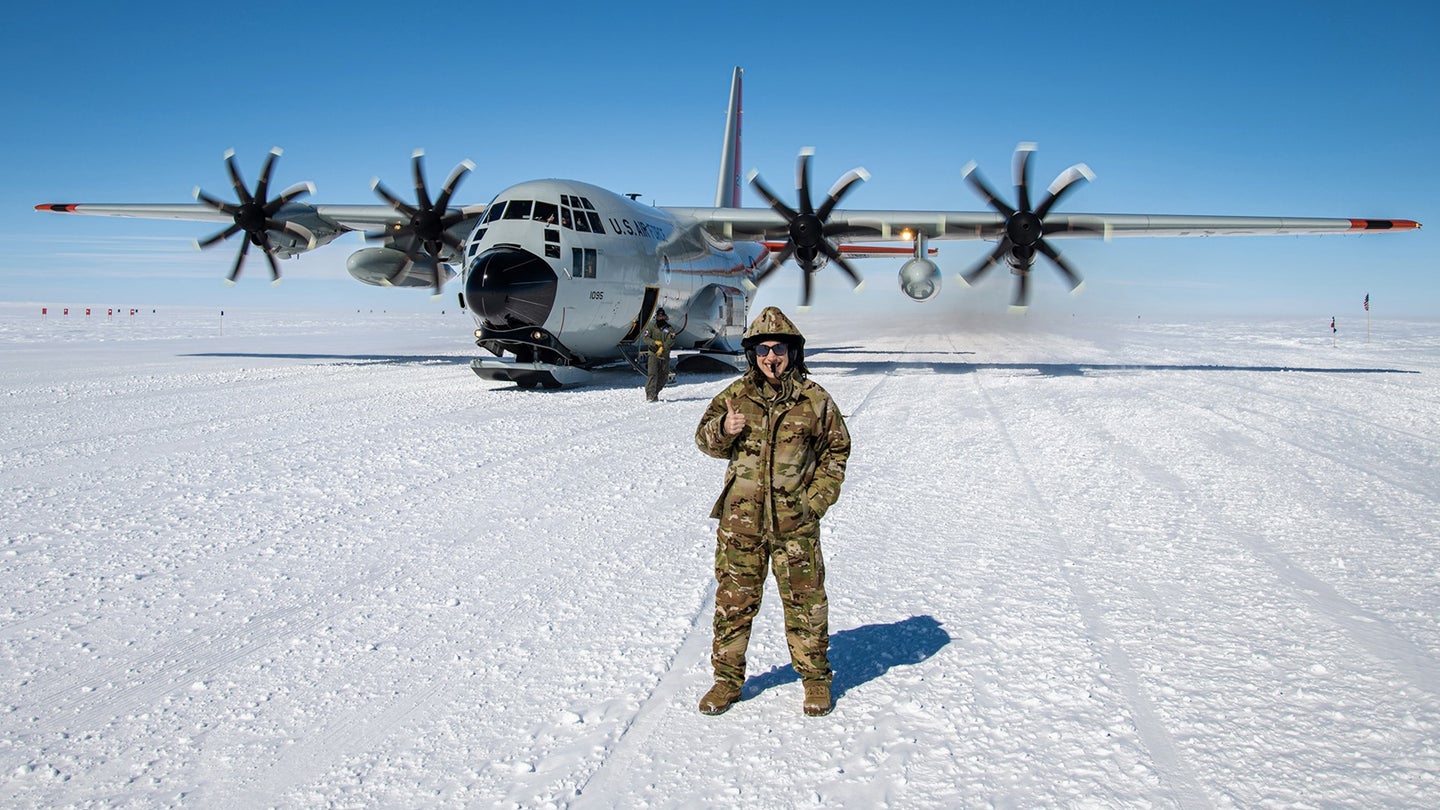 An airman poses in front of an LC-130, the largest ski-equipped airplane in the world. (Air Force photo).
SHARE

Let it be said that the C-130 Hercules can do just about anything. It serves as a gunship, a weather plane, an aerial refueling tanker, a command and control hub, and as an old-fashioned transport. But one of its unusual jobs is less about how the Herc flies and more about how it lands: on ice and snow using skis as landing gear.

Also called the ‘Skibird,’ the Air Force’s LC-130 is the largest ski-equipped aircraft in the world, and it regularly flies resupply missions to science stations in Antarctica and Greenland. The Air Force’s 10 LC-130s are flown by the New York Air National Guard’s 109th Airlift Wing. But to be a Skibird aviator, pilots and crew have to undergo an intense arctic survival training course in the middle of nowhere in Greenland.

As explained by a recent Air Force press release, Barren Land Arctic Survival Training (BLAST) is a unique experience. Unlike the military’s usual arctic survival school, which teaches students how to hunt animals and gather wood for fire and shelter, BLAST is special because those things don’t exist in the barren wastes of the Antarctic or the far north. Instead, students are taught to survive using the resources aboard the LC-130. Those include arctic tents, camp stoves, cold weather rations and, surprisingly, a portable hyperbaric chamber to treat altitude sickness.

Why a hyperbaric chamber? Because some of the ground 109th aircrews fly over is not only cold and desolate but high-up, too. The South Pole is over 9,000 feet above sea level, while the Greenland ice cap is 7,000 feet above sea level, according to the press release. Altitude sickness is a danger at that elevation, so aircrews come prepared. It’s one of several dangers that airmen learn to face when they arrive at Raven Camp, a training site in the middle of a seemingly endless field of snow and ice in Greenland. To get there, airmen fly LC-130s to Kangerlussuaq International Airport in Greenland, then fly another 30 minutes into the wilderness, where they land on a 6,000 foot-long “skiway” carved out of the snow and ice by two caretakers who maintain Raven Camp during the summer, the press release explained.

There are no permanent buildings at Raven Camp, which is all the better since the training is meant to prepare airmen for what to do in case they need to make an emergency landing in a completely barren environment. In fact, one of the key skills in that situation is the ability to build your own shelter. At Raven Camp, that takes the form of fighter trenches and snow houses. Fighter trenches, the press release explained, are small trenches made for sleeping, while snow houses are larger cold weather shelters meant as a gathering place for preparing water and eating. The snow houses are made with 8-12 inch blocks of snow that are cut and stacked together.

The exercise is meant to simulate the real thing, but Raven Camp is still an arctic environment, so the “real thing” often happens anyway.

“The day before we were supposed to leave we got hit with a massive blizzard, the plane was unable to pick us up. I mean, you couldn’t see your hand in front of your face it was so bad,” said Captain Nick Margaglio, a LC-130 pilot. “It went from training to real world and we had to sit and wait it out. We sat in there for 24 hours and just listened to the deafening wind.”

Though the 109th Airlift Wing has a long-running mission of resupplying Arctic and Antarctic scientists, the BLAST training is particularly relevant today when the U.S. military is scrambling to fortify the Arctic against Russia and China, who also claim the space as global warming carves new shipping routes out of the melting ice and reveals new areas for fishing and oil drilling.

“To compete in the Arctic, you have to be on the field,” said Air Force Gen. Glen VanHerck, commander of North American Aerospace Defense Command, during a 2021 hearing before the House Armed Services Committee. “And currently, our capabilities, I would assess that we’re in the game plan development [stage]. We’re not able to have the persistence that I need to compete day-to-day in the Arctic.”

The ski-equipped LC-130s of the 109th Airlift Wing may play a key role in establishing that presence since the U.S. has few icebreakers that can move troops and supplies far north. The Coast Guard has only two such ships, one of which is falling apart while the other is used for spare parts. Russia meanwhile has more than 40, according to some estimates. Though the Coast Guard has ordered more of them, its first new delivery was recently pushed back from 2024 to 2025, according to The War Zone.

“You need icebreaking to be able to project year-round presence and when it’s [of] your time and choosing,” said Randy Kee, the senior advisor for arctic security affairs with the Ted Stevens Center for Arctic Security Studies, last week.

In the meantime, there may be a lot of responsibility weighing on the skis and crews of the 109th Airlift Wing’s Skibirds. But they seem confident after Raven Camp. After two days of classroom training and three days of surviving on the ice cap in Greenland, the airmen returned to Stratton Air National Guard Base in Scotia, New York.

“There is no doubt in my mind that this experience, if needed, would increase my ability to survive long enough to be recovered,” Margaglio said