The U.S. military's sleep problem is getting worse, and it's hurting certain troops more than others. Instances of insomnia among... 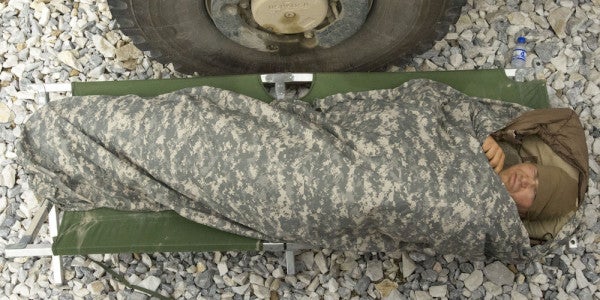 The U.S. military's sleep problem is getting worse, and it's hurting certain troops more than others.

Instances of insomnia among military personnel have nearly quadrupled in the last decade, rising from 16 reported cases in every 1,000 troops in 2005 to 75 in every 1,000 in 2014, a 372% increase, according to a new study published in the Journal of Sleep Research.

Overall, the incidence of the two disorders among service members is nearly double that of the U.S. civilian population.

“Sleep disorders are a serious problem that interferes with the ability of soldiers to do their jobs effectively,” study author Harris Lieberman of the U.S. Army Research Institute of Environmental Medicine told Reuters. “When you’re sleep deprived, you can’t use your brain in the way soldiers need to do … You’re unable to think at the level you can perform at when well-rested.”

Chart via Journal of Sleep Research

If this research is correct, the results suggest that out of the total U.S. military population of 1.4 million personnel, some 105,000 were dealing with insomnia and 382,200 with sleep apnea — which would mean that, as of 2014, nearly a third of America’s fighting force isn’t getting adequate sleep.

The impact of sleep issues isn’t spread equally across the armed forces. The study reveals that while men tend to experience higher rates of sleep apnea, it’s women who have to deal with insomnia most. Generally, African-Americans, senior enlisted personnel, Army personnel, and all individuals over the age of 40 disproportionately report falling victim to both disorders.

The findings support the results of a 2015 RAND Corporation study on sleep problems in the U.S. military, in which nearly half the service members surveyed reported “clinically significant” poor sleep quality. Only 37% of service members reported getting the recommended eight hours of sack time each night.

This is a big problem for the Department of Defense. Pentagon research has shown for years that poor sleep patterns negatively impact operational readiness and future health and well-being. The 2015 RAND study found that 33% of service members reported feeling fatigued more than 3 times a week due to lack of sleep, while 51% reported some sort of sleep-related impact on their daily responsibilities.

The RAND study also suggests that clinical fatigue creates a vicious cycle of chemical dependence among service members, in which troops use energy drinks and other stimulants to make up for their sleep debt and turn to sleep aids to help them finally conk out at night:

A prior study by Joint Mental Health Advisory Team 7, established to assess the behavioral health and treatment of deployed forces, found that almost 50 percent of deployed servicemembers used energy drinks on a daily basis.

Less is known, however, about how frequently servicemembers use these products after returning home. In the RAND sample, only 8–10 percent reported daily use of energy drinks, but service members in the sample tended to be older, all were married, and most were not currently deployed, which could help to explain the differences between the RAND and Joint Mental Health Advisory Team studies.

While RAND noted at the time that the “efficacy and safety” of medical supplements in military settings hasn’t been fully explored, chronic use is likely to contribute to long-term health problems, which could pose a big problem down the line for a VA already facing increasing health-care costs.

But the pressing problem isn’t future health-care costs: It’s operational readiness downrange. And with sleep disorders on the rise, American combat troops aren’t nearly as sharp and efficient as they should be — a condition that could come with deadly consequences.