Why Doing Away With Stateside DoDEA Schools Will Hurt Military Families

Editor's Note: This article was original published on Military One Click.  The U.S. military’s budget is large. Numbers don’t lie,... 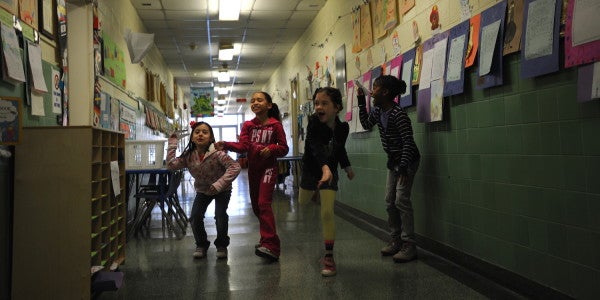 Editor's Note: This article was original published on Military One Click.

The U.S. military’s budget is large. Numbers don’t lie, and our fiscal year 2017 military spending was almost triple that of China. It hovers around $600 billion. . . that’s with a B.

We spend a lot on our military and understandably so. We have been engaged in active war for almost two decades. Our aircraft, vehicles, and vessels need to work safely and effectively. Weapons and ammunition need to be purchased. Troops need to be outfitted with the necessary supplies and trained properly. No one is arguing the need for any of this.

Instead, it seems the Trump administration is looking at stepping away from having the military run stateside DoDEA schools. This comes as part of a larger movement to reduce the size of the federal workforce and cut costs.

Let’s be real though: The entire DoDEA budget for FY 2017 is approximately $2.2 billion. That’s not just the CONUS schools. That’s for all DoDEA-run K-12 schools worldwide. Out of roughly $600 billion in total military spending based on the FY 2017 budget, the DoDEA’s spending is a drop in the bucket. A large drop, but it’s still less than 1% of the total DoD budget.

Is changing the Domestic Dependent Elementary and Secondary Schools (DDESS) system going to really have an impact on overall spending and bureaucracy in Washington? The effects on the federal workforce or the budget, positive or negative, will be minute, and the research seems to back this assumption up.

In 2016, the DoD commissioned a study by RAND to investigate ways to change the DoDEA, specifically the stateside DDESS, in order to be more cost effective. All DDESS schools are located on military installations east of the Mississippi. The last complete year of financials available to the RAND team was from FY 2013. The operating cost for only the DDESS schools was $427.1 million. This accounts for approximately 21 percent of the total DoDEA budget.

The easiest route, legally, would be to keep the status quo. The next two most feasible options would include transferring complete control to the local education agency (LEA) or contracting with the LEA to provide educational services. Several states have laws or legal opinions on the books that remove state and local responsibility for educating military children residing on military installations.

Contracting with an LEA to provide services through military maintained facilities, or even completely transferring those schools to the local district, raises some questions. What happens when a base goes into lockdown with non-federal employees at the school? What about non-military connected children who are attending those LEA-run schools during a lockdown or other incident on base? What about busing and ID checks? The list of potential security questions could go on. We haven’t even touched some of the logistical questions, especially for bases that straddle district–or even state–lines.

Financially, choosing either of these two most likely options saves roughly $50-250 million per fiscal year in the federal budget in 2013 dollars. Again, that’s $50 to 250 million, with an M, out of approximately $600 billion, with a B, in total U.S. military spending.

But let’s play this out. Let’s walk away from direct military control of the schools and push all those military families into the LEAs nearest their base.

In some places, this might be just fine. In some areas, local schools perform at or above the current DDESS average on nationally normed education assessments. Parents already feel confident enrolling their children in these off-base schools.

In other places, this isn’t the case. I’ve heard from many parents in particular locations that they prefer to send their children to private schools or homeschool if they are unable to enroll in DDESS schools. For them, the public school simply isn’t an option. Not because the teachers themselves don’t care, but the system itself is broken or they feel the academics aren’t quite up to snuff.

The RAND study bears this out. They found that DDESS schools outscored 39 states on nationally normed tests. 39. Let that sink in for a minute. By turning over control of DDESS schools to LEAs, military children could be placed into underperforming schools.

This is on top of the already bumpy ride many military children face in K-12 schools. The constant switching between state curriculum and requirements is challenging. For families who have children on IEPs, 504 plans, or in the gifted education program, obstacles become exponentially greater. They are fighting against different laws and guidelines in each state just to get their child the services needed to succeed in school. Not all schools are created equal, for any child, unfortunately. And while there are bright spots, these are not always reflective of the whole.

For many families, having the DDESS schools available provides calm in the storm. They know that they have a familiar system to rely on. Families know that whether they walk into a school in Virginia or North Carolina, the curriculum and expectations are going to be the same. The standards will be high. There will be integrated and omnipresent support specific to military children, like Military Family Life Counselors and frequent service member volunteers.

Beyond that, either turning students over to the LEAs or transferring control and management to the LEAs would add hundreds or thousands of new students to districts. For high performing districts, this might be okay. In well-funded districts, the extra cost of all these additional students could be handled in the long term with a lot of planning. Districts where the budget is already stretched super thin and resources are already scarce will be challenged. What will adding hundreds of new students do to scores in low-funded and underperforming schools? I can’t imagine it will be good, even with support from Impact Aid or the federal government paying management costs.

What this really comes down to is numbers and perceived intent. Yes, federal spending does need to be reigned in somewhere along the line. There certainly could be cuts made here or there in the overall DoDEA budget. And some bureaucratic bloat and redundancy could be eliminated. But there are other places in the overall federal and DoD budgets that should be given a hard second look as well.

In the long run, the $427.1 million it took to run DDESS schools in 2013 is minuscule compared to the overall military budget. Turning over control isn’t going to stop federal spending on these schools or these students. And it’s going to take people to oversee the management of the schools by the LEAs. The argument about reducing cost and the federal workforce is almost moot. The savings is, in the grand scheme of things, next to nothing.

It’s not a good look.