Toxic Chemicals Poisoned The Drinking Water At Military Bases. Now Congress Is Doing Something About It 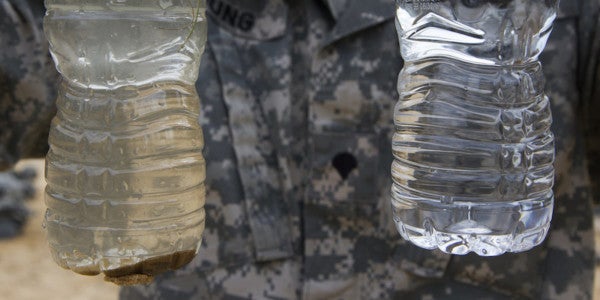 Hoping to push for clean-up and to hold polluters accountable, members of Congress created a task force Wednesday to help constituents nationwide who have contended with drinking water contaminated by chemicals used on military bases.

The House members forming the task force have dealt with the problem individually in their districts, from Pennsylvania to Michigan. Rep. Brian Fitzpatrick (R., Bucks) is a co-chair and Rep. Madeleine Dean (D., Montgomery) is a member; The two represent Bucks and Montgomery County towns where tens of thousands have been affected by tainted drinking water.

The group wants the Environmental Protection Agency to designate per- and polyfuoroalkyl substances, or PFAS, as hazardous substances and regulate how much of the chemicals can be present in drinking water.

“We're all going to collectively put the pressure on the EPA to make a decision,” said Fitzpatrick, who said he believes the manufacturers of PFAS should bear the burden of the cost of remediation.

PFAS were used in firefighting foams used at military bases, airports, and private companies nationwide but are also present in many modern-day products and have been linked to cancer, fertility problems, liver damage, high cholesterol, and other health problems.

In Horsham, Warrington, and Warminster, where levels of the chemicals found in drinking water exceeded the Environmental Protection Agency's health advisory, the military has helped address contamination but more extensive clean-up is still in early stages. Residents have clamored for a faster and more thorough federal response.

Blood tests of Horsham, Warrington, and Warminster residents released last year found that residents who drank the tainted water have levels of PFAS in their blood above the national average.

Residents in at least 22 other towns in Bucks and Montgomery Counties also have PFAS in their drinking water. The military and other federal agencies get involved only when PFAS exceed 70 parts per trillion, but some states, including New Jersey, have proposed their own levels that are lower. Vermont has the strictest advisory level at 20 parts per trillion.

In New Jersey, the military has tested private wells near Joint Base McGuire-Dix-Lakehurst and provided bottled water to residents with wells that tested over the EPA advisory level.

The military is in the process of testing more than 400 bases nationwide for similar contamination. The process will take years and cost millions of dollars..

Members of Congress from Pennsylvania and other states affected by PFAS have been pushing for more funding and studies for years, but by creating a task force Wednesday they hope to form a stronger coalition to pressure the federal agencies involved.

“Rather than dealing with these things individually when it comes to (funding and remediation)… we figured it was a good idea to get all the members of Congress who are dealing with similar issues in their communities together in one task force, so we can kind of speak with one voice and get the problem addressed,” Fitzpatrick said.

If the EPA designated PFAS as a hazardous substance, it would create a maximum contaminant level (MCL), which would apply nationwide: It is “a way to avoid the patchwork of different standards and have one uniform standard,” Fitzpatrick said.

EPA regulation would also alleviate problems caused by the current lack of federal regulation, Fitzpatrick said; it would give residents recourse for civil lawsuits, allow criminal charges to be brought against polluters, and help value properties affected by contamination, such as the former navy base in Willow Grove.

The congressional task force will also push for more studies on PFAS health effects from the Centers for Disease Control and examine funding and clean-up, from drinking water filters to groundwater remediation.

WATCH NEXT: The Top 5 Military Bases That Should Count As Deployments