The number of military installations with known contamination or suspected discharges of per- and polyfluoroalkyl substances, or PFAS, continues to rise, according to an environmental advocacy group keeping tally based on information obtained from the Defense Department 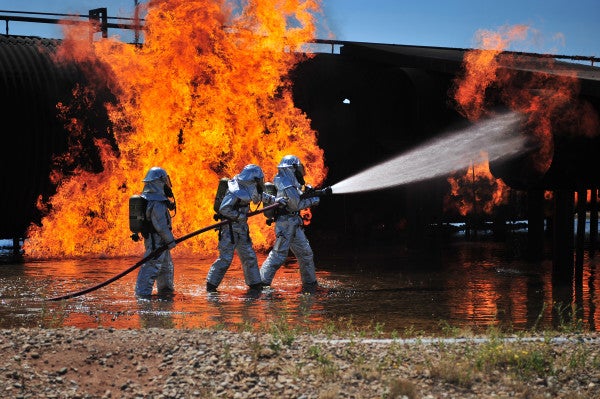 The number of military installations with known contamination or suspected discharges of per- and polyfluoroalkyl substances, or PFAS, continues to rise, according to an environmental advocacy group keeping tally based on information obtained from the Defense Department.

According to a report released Thursday by the Washington, D.C.-based Environmental Working Group (EWG), 678 installations are either contaminated or had suspect discharges of PFAS compounds used in firefighting foams.

The DoD had previously identified 651 active or former military bases where perfluorooctane sulfonate or perfluorooctanoic acid, also known as PFOS and PFOA, may have been used or released in a report from the Pentagon's PFAS Task Force released Feb. 13.

PFAS chemicals have contaminated communities across the U.S. from industrial sites that manufacture or use the compounds in products such as non-stick cookware, stain repellent, materials and food wrappers. But EWG found that many of the highest levels of the chemicals, sometimes called “forever chemicals” because they do not break down and are impossible to destroy, are on or near military bases, where firefighting foams containing PFOS and PFOA have been used for decades in training and emergencies.

“Through the Freedom of Information Act and other DoD documents, we have confirmed that the PFAS is in the tap water or groundwater of 328 of these 678 military installations,” said Scott Faber, EWG's senior vice president for government affairs. “PFAS contaminate the blood of every American and have been linked to very serious health problems. … The Pentagon's use of aqueous film forming foam has disproportionately exposed military service members and their families and nearby communities to higher levels of PFAS pollution.”

Last month, EWG officials said they had found 28 installations where the levels of PFAS in drinking water exceeded standards set by some states that are stricter than the Environmental Protection Agency's accepted lifetime threshold.

Defense Department PFAS Task Force members said in February, however, that no one living on- or off-base is currently drinking water above the EPA's threshold of 70 parts per trillion in places where the DoD is the known source of the contamination.

The Environmental Working Group maintains a map, developed in collaboration with the PFAS Project Lab at Northeastern University's Social Science Environmental Health Research Institute, as well as lists of the military installations and sites with known PFAS contamination.

The Defense Department also maintains a website focused on PFAS that includes task force reports and other DoD initiatives addressing the investigation and cleanup.

Congress included a number of provisions in the fiscal 2020 National Defense Authorization Act to restrict PFAS use by the military services, to include prohibiting the use of fire fighting foams that contain PFAS in training — a measure the DoD has already instituted at most installations — and phasing out the use of PFAS chemicals in Meals, Ready to Eat packaging.

The law also required the DoD to begin testing the blood of military firefighters to determine the extent of their PFAS exposure.

Rep. Dan Kildee, D-Michigan, a member of the congressional PFAS Task Force, said Thursday the provisions didn't go far enough, and he and his colleagues have asked the House Armed Services Committee to include additional measures in the fiscal 2021 defense bill.

According to a letter sent by the task force to Rep. Adam Smith, D-Washington, and Rep. Mac Thornberry, R-Texas, the committee 's chairman and ranking member respectively, the proposals include:

“These forever chemicals are really dangerous; they have all sorts of health implications. We are learning more about what the health impact is, but we know enough now to know these are really dangerous to human health and we ought to act as a nation to protect people from them,” Kildee said.