Barksdale Air Force Base in Louisiana — home of half the United States’ B-52 bomber fleet, and for decades a... 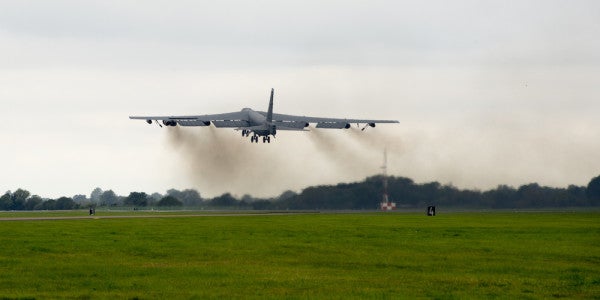 Barksdale Air Force Base in Louisiana — home of half the United States’ B-52 bomber fleet, and for decades a critical hub for overseas air operations — produces a lot of toxic waste. That includes thousands of tons of powder, with dangerous trace metals and chemicals, from sandblasting and cleaning aircraft. Normally, that much hazardous material would be a headache to dispose of, but the Air Force found a contractor willing to cart the powder off and recycle it into harmless cinder blocks for construction. .

That was the plan, anyway. But it turns out the company the Air Force used wasn’t making much with its toxic waste; rather, it was stashing the junk in a variety of warehouses across the country, in violation of scads of federal regulations, and potentially endangering residents near the dump sites. U.S. Environmental Protection Agency officials got involved last year… and what they found went much deeper than Barksdale or a single contractor. The investigation revealed systemic failures in military oversight and corruption among contractors hired to eliminate dangerous waste.

That’s the upshot of How Military Outsourcing Turned Toxic, a deep, far-ranging new report by ProPublica on contractor abuse in Pentagon hazardous-materials disposal. The story — part of a larger Bombs in Our Backyard series on the DoD’s failing efforts to stop being a top global polluter — gets into the gory details about the current investigations, and Task & Purpose compiled six of the most disturbing takeaways housed within the report.

1. The military is one of the worst polluters in the country.

At one point, according to ProPublica, the Defense Department had at least 39,000 toxic sites across the country. It’s no surprise that military bases house lots of hazardous chemicals and toxins, and they produce a lot of dangerous waste — especially from training, maintaining, and disposing of equipment, whether it’s ammunition components, unexploded ordnance, paints and thinners, or, in the case of Barksdale, chemicals used for aircraft upkeep.

2. The Pentagon pays contractors exorbitant fees to decontaminate its properties.

Those Defense Department officials responsible for disposing of chemical pollutants at Barksdale outsourced the job to contractors — in particular a company called U.S. Technology — to which it paid over $49 million across 830 contracts. And according to data found by ProPublica, the department hired private firms to clean up 2,400 sites nationwide, for what it estimates will be up to $70 billion overall.

3. Toxic waste is a service-wide problem, affecting all branches.

TetraTech, one firm highlighted by ProPublica that makes $2.3 billion a year in DoD contracts, was paid more than $300 million to clean up a contaminated Navy site in San Francisco’s Hunter’s Point, which was set to be converted to residential apartments for the city’s white-hot housing market. TetraTech, feds learned, was falsifying soil records to conceal radiation that remained behind on the site. The company was fined less than $7,000 and still has a Navy contract, the service confirmed.

4. The Pentagon didn’t have enough staff or resources to oversee cleanup operations.

Despite choosing to put cleanup activities into the hands of contractors, most responsible DoD officials lack the ability to impart quality control. Many projects reported to have been completed are not finished.

One company, Explo Systems, contracted with the Army to disassemble old artillery shells, separate out the M6 explosive propellant, and recycle it into blasting caps for miners. Instead, the company stashed 16 million pounds of the explosive, along with other incendiaries at a National Guard base in Louisiana — a discovery made by authorities only after a massive explosion on the base broke windows 4 miles away and sent a mushroom cloud a mile and a half into the air, ProPublica reports.

“Some of the most dangerous cleanup work that has been entrusted to contractors remains unfinished, or worse, has been falsely pronounced complete, leaving people who live near former military sites to assume these areas are now safe,” according to ProPublica.

5. Pollutant levels are dangerous for residents.

In 2016, the EPA reported finding high levels of “chromium, arsenic, lead and cadmium” in soil near a defunct NASCAR racetrack in Macon, Georgia, where U.S. Technology was dumping truckloads of waste from Barksdale Air Force Base. Only the arsenic was found to be at a dangerous level for industrial sites. However, ProPublica added, “the levels of chromium, lead and cadmium would all be considered much more dangerous if judged by residential health standards.” And the materials could be found less than 100 feet from some of the residents’ houses.

Raymond F. Williams, president and owner of U.S. Technology Corporation, was found to have been tailoring contracts to assure that his company would benefit. In June, he was indicted in Georgia for paying a Department of Defense official $20,000 a year to make sure that Air Force contracts required U.S. Technology’s services, and no other company could compete. But the company and its billions in DoD contracts live on, with a new owner and a near-identical staff. “We’re trying to get people to understand we are not that guy,” the new owner of the company — now called U.S. Technology Media — said of Williams. “We are not that company.”