US Contractor Faces Accusations Of Sex Trafficking On Base In Iraq 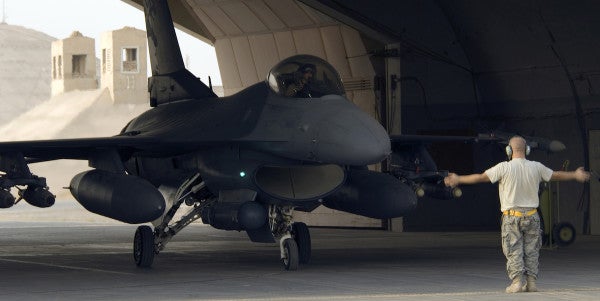 A major American contractor in Iraq is engaging in rampant fraud, waste, and abuse involving prostitution rings, alcohol smuggling operations, and giving militias virtually free rein of a major base, according to two if its former employees.

A big story in the Associated Press details astounding charges of fraud, waste, and abuse surrounding Sallyport Global, a U.S. company that received nearly $700 million in federal government contracts to secure Balad Air Base, ostensibly providing support in Iraq in the fight against the Islamic State.

Robert Cole and Kristie King were investigators for the contractor, Sallyport Global, until earlier this year when their contracts were terminated. They spoke out about their investigations in a profile in the Associated Press, amid a lawsuit they have fired against their former employer after their March firing with little explanation. Per the report:

Cole and King had spent more than a year together in Iraq investigating all manner of misconduct at Balad and beyond.

They'd uncovered evidence that Sallyport employees were involved in sex trafficking , they said. Staff on base routinely flew in smuggled alcohol in such high volumes that a plane once seesawed on the tarmac under the weight. Rogue militia stole enormous generators off the base using flatbed trucks and a 60-foot crane, driving past Sallyport security guards.

Managers repeatedly shut down Cole and King's investigations and failed to report their findings to the U.S. government that was footing the bill, the investigators said.

Right before they were fired, Cole and King had opened an investigation into allegations of timesheet fraud among Sallyport employees. In a call with Sallyport lawyers, they said, they were advised to keep two sets of books about potential crimes and contract violations.

The whole piece is well worth a read, but here are some of the most salacious details:

– Balad was supposed to be an alcohol-free base, but staff regularly smuggled in alcohol, “in such high volumes that a plane once seesawed on the tarmac under the weight” of the contraband alcohol.

– A truck blew through a rope barrier into an area where deadly force is authorized to protect a sensitive fleet of F-16s. “For more than 10 minutes,” the Associated Press story states, “no one even responded as the vehicle drove away, according to reports citing surveillance video.”

– A Sallyport SUV assigned to bodyguards was stolen as part of an Iraqi militia plot. The prime suspect was an Iraqi Sallyport bodyguard who threatened to join the militia when he was confronted.

– A hotel in Baghdad running a prostitution ring counted Sallyport employees among the customers. “Four Ethiopian women who had worked as prostitutes at the hotel were later hired in housekeeping by Sallyport,” the report states.

– Perhaps the piece de resistance came in November 2015, when the militia drove two flatbed trucks and a 60-foot crane, loaded up three generators over three hours, and drove off base totally unchallenged by any security.

– Last but not least, King and Cole’s paperwork for their termination was signed off on by a human resources manager who they were investigating for timesheet fraud.

For its part, Sallyport issued a statement addressing the allegations to the Associated Press.

“Sallyport has a strong record of providing security and life support services in war zones like Iraq and plays a major but unheralded role in the war against ISIS,” the company’s chief operating officer said. “The company takes any suggestion of wrongdoing at Balad very seriously.”

There still has not been any explanation of why King and Cole were terminated, however.

“We knew too much,” King told the Associated Press. “They want to cover it up and move on because it's a huge amount of money.”