There’s nothing more fearsome than the sight of battle-hardened Marines storming an enemy beach, but even the service’s tried-and-true ship-to-shore... 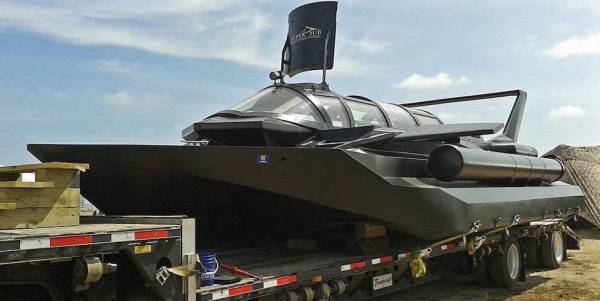 There’s nothing more fearsome than the sight of battle-hardened Marines storming an enemy beach, but even the service’s tried-and-true ship-to-shore maneuvers need for 21st-century warfare. Thanks to some engineering ingenuity, the Marine Corps may have found a new vehicle of choice for amphibious assaults.

As part of the Ship-To-Shore Maneuver Exploration and Experimentation (S2ME2) Advanced Naval Technology Exercise 2017, the joint rapid-prototyping demonstration intended to augment existing amphibious assault tactics with 21st-century emerging technologies, Navy and Marine officials are observing more than 100 high-tech prototypes in action. But the crown jewel of the exercises is likely a militarized version of the Hyper-Submersible Powerboat, or HyperSub, a sleek speedboat that converts to a submarine:

Designed by HSP Technologies, the commercial HyperSub is nearly a decade old, but the company announced Wednesday that a militarized prototype, dubbed “Project X,” would hit the seas at this year's S2ME2 demonstration. Just 45 feet long and weighing in at 30,000 pounds, the HyperSub’s diesel engines power a 30mph surface cruise speed while hauling up to 6,000 pounds of cargo.

But below the surface is where things get interesting. As The War Zone points out, the HyperSub is a bit more cumbersome than the existing rigid-hull inflatable craft utilized by the Pentagon, and the HyberSub’s two Innerspace Corporation electric thrusters only enable a top speed of 6mph underwater for up to 12 hours. But compared to other ship-to-shore vehicles, the HyperSub is a true submersible, making it an ideal amphibious assault craft.

This versatility makes the HyperSub ideal for reconnaissance and intelligence-gathering missions, a major emphasis focus of the S2ME2 exercise. From The War Zone:

One of the most obvious missions for a HyperSub with these systems would be special operations tasks, from infiltrating teams of elite troops to scouting hostile coastlines for secretive missions. The results of the tests at Camp Pendleton might spark interest within U.S. Special Operations Command, where seabasing and other maritime requirements are still emerging.

Marine Corps reconnaissance elements could be interested in the craft's covert capabilities for reconnoitering landing sites before an amphibious assault and for forward deploying frogmen and special operations teams. On top of that, the HyperSub in its current form or the same basic layout in a larger incarnation could perform more conventional duties, like carrying Marines ashore during an amphibious assault or ferrying supplies to an established beachhead or forward base.

The HyperSub may look like a souped-up version of that insane stealth boat from the 1994 “Street Fighter” movie, but don’t let the paint job fool you: This puppy has more in common with the Wet Nellie, the Lotus Esprit S1 sports car from 1977 James Bond film “The Spy Who Loved Me” that converted into a submersible escape craft to save Roger Moore’s sorry ass.

Sure, the HyperSub would look a lot more badass with a few M134 GAU-17 “Vulcan” cannons attached, but it’s sure to wow Navy and Marines leaders regardless. The future of amphibious operations has never looked so fast — or so furious.