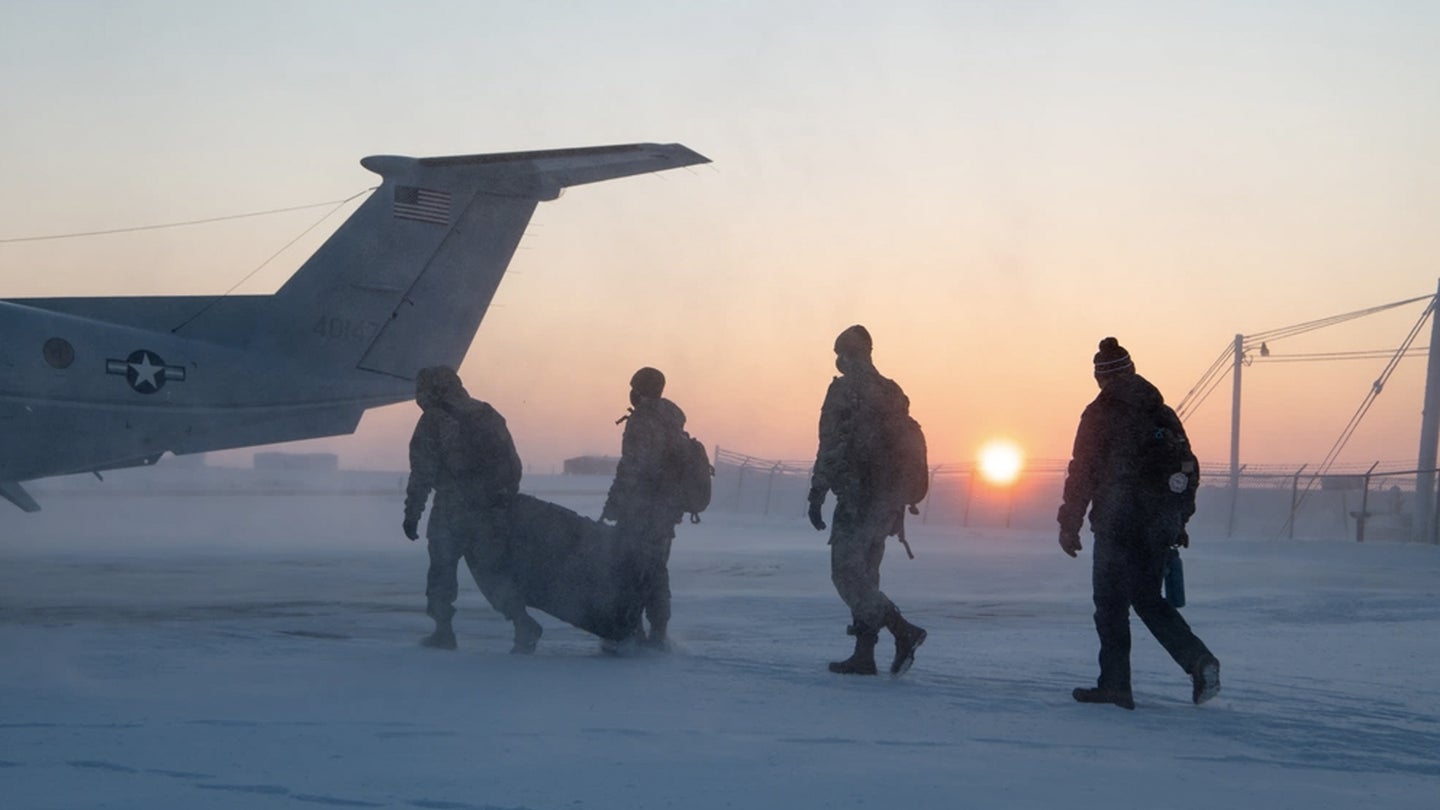 Members of the 611th Air Communications Squadron Mission Defense Team return to a U.S. Air Force C-12 Huron after completing their mission at a Long Range Radar Site in Utqiagvik, Alaska, Feb. 15, 2022. The 611th ACOMS visited the LRRS to validate the integrity of the data being received from the site. (U.S. Air Force photo by Airman 1st Class Patrick Sullivan).
SHARE

It sounds like the start of a horror movie. A group of young airmen step off a plane onto the frozen tundra, where they have to inspect a Cold War-era radar site deep in the Arctic Circle. But it’s just another day at the office for four members of the 611th Air Communications Squadron, whose task is to inspect some of the most remote radar sites in the country to make sure they’re still watching the skies above America’s northernmost line of defense.

“The data received from Alaska’s long range radar sites are essential to enhancing Alaska NORAD Region’s ability to monitor all activities in our area of responsibility 24/7,” said Col. John Krellner, commander of the 611th Air Operations Center, in a recent press release. “The situational awareness provided by these radars enables senior leaders the ability to make timely, informed decisions in defense of our homeland.”

But someone has to check up on the 15 radar sites to make sure the data coming from them still checks out. That task falls to Capt. Jake Spuller, the special missions flight commander of the 611th Air Communications Squadron. He and three other airmen from Joint Base Elmendorf Richardson, located on Alaska’s south coast, took a flight across the enormous state to Point Barrow, located 350 miles above the Arctic Circle and right outside Utqiagvik, a town of about 5,000 people and the northernmost one in the U.S.

The four airmen entered the radar site to perform a cybersecurity analysis of the data going through it. They’re not alone though: they carry with them a big clunky box with a high-tech device called a cyber vulnerability assessment hunter, which allows airmen to not only scan the network for cybersecurity vulnerabilities, but also find and mitigate threats, according to the Air Force.

“Ensuring the integrity of the data and our confidence in the air picture is critical to guaranteeing situational awareness in order for our senior leaders to make the right decisions,” Spuller explained.

Cybersecurity was not a threat the Air Force had to worry about when it first built the Point Barrow radar site in the 1950s. At the time, the service needed a Distance Early Warning Line to alert commanders if the Soviet Union was launching an invasion of North America over the North Pole. The data from those sites still flows back across the state to the Air Operations Center in Elmendorf, where airmen can see on their computer screens what’s going on in the airspace above the 49th state.

While the remote radar sites were first manned by service members, in 1984 the Air Force bid out the everyday site work to contractors, who sometimes work the isolated sites for months at a time. It takes a special kind of person to do the job. Like lighthouse keepers, the station technicians often spend months there, and sometimes they get trapped in their radar facilities for days or weeks at a time if winter weather renders the local roads or tram system inoperable.

“Workers are taught the skills to survive in the most extreme areas of the Alaska coastal and interior sites as well as how to survive long periods of isolation,” noted an Air Force press release. The stations are also maintained by master mechanics who can keep any part of the facility running.

“These station mechanics risk their lives continually to ensure the other workers are able to live and do their jobs in the safest way possible,” the press release said.

The team from the 611th did not have to stay so long to do their job. Once the data was checked out, the four airmen packed up their cyber assessment hunter, headed back to their C-12 Huron plane and took off for the next radar site. A polar bear watched them from the nearby snow as they flew back south.