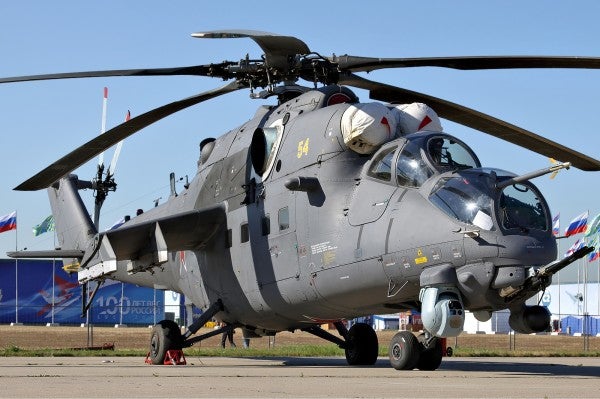 A building full of unsuspecting Russians were treated to a nasty surprise on Sunday when a military helicopter accidentally fired a “volley” at their apartment complex, Russian news outlet Lenta.ru reports.

The incident, which took place in the southeastern city of Chita, reportedly involved a Russian Air Force Mi-35M attack helicopter, an export version of the Mi-24 Hind.

According to state-run news outlet Russia Today, the helicopter was undergoing maintenance at the nearby Cheryomushki Air Base when a malfunction occurred that caused the aircraft's chin-mounted twin-barrel GSh-23V 23mm cannon to discharge.

Cheryomushki Air Base is roughly 1.5 km, or just under a mile, from Chita.

No one was injured in the incident, which “damaged the glazing and balcony on the third floor of the building,” according to Lenta.ru.

“The command of the military unit is interacting with local authorities on the issue of compensation for damage caused,” according to local media outlet Zab.ru.

The Russian Ministry of Defense confirmed the incident, according to Defence-Blog.

This entire incident is totally horrifying, but all things considered, this is nowhere near as bad as that time a Russian attack helicopter fired a rocket into a group of onlookers during military exercises in 2017.