A Russian news site published spectacular video Sep. 19 of a Russian attack helicopter apparently letting one of its air-to-ground... 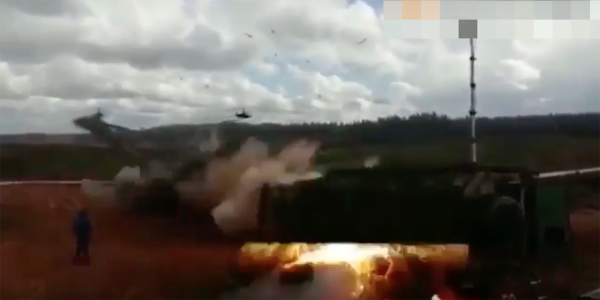 A Russian news site published spectacular video Sep. 19 of a Russian attack helicopter apparently letting one of its air-to-ground rockets loose on observers during a major annual training exercise near the country’s western border with several NATO nations, the Associated Press reported this morning.

The video, which has since been reposted to YouTube by several users, clearly shows two helicopter gunships — identified by Russian sources as Ka-52 “Alligators” — approaching the observers fast, when two smoke trails shoot out from the trailing bird. The rockets quickly impact next to the observers, causing an explosion and a shockwave. The video also shows the wreckage at the impact site, including a perfect rocket-sized hole is visible in the window pane of one damaged vehicle.

Russia’s 66.ru site reported on Sept. 19 that two people were hospitalized and two cars were wrecked in the incident, which occurred during the Russia-Belarus joint Zapad 2017 maneuvers. 66.ru said the incident occurred Sunday or Monday on the Luzhsky range, an hour’s drive east of the Russia-Estonia border. The Zapad exercise, which began Sep. 14, involves as many as 100,000 Russian military troops and has raised concerns among NATO members that Moscow seeks a war footing with Europe and the United States. (“Zapad” is Russian for “west.”)

Related: Why Are 100,000 Russian Troops Headed Straight For NATO’s Borders? »

Russian military officials confirmed the incident to the AP, But denied that the footage was from Sept. 18 or that anyone was hurt by the explosion.

Other observers said the incident was not the fault of the helicopter pilot, but his machinery. A military source told 66.ru the pilots were preparing for a live-fire practice run beyond the observers, but that when “there were 500 meters left… something shorted, and the missiles went off by themselves.”